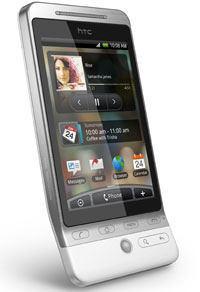 The HTC Hero touchscreen mobile phone is the company’s latest release of a phone using the Google Android operating system. And it is their best effort yet. That’s not to diss the earlier Dream and Magic – the Dream was after all HTC’s first go with Android, and the Magic is I think a fine phone. But what the Hero implements is all the work HTC have done on making the interface easy to use, along with enhancements of features on other HTC phones.

Looks-wise, there are no great stylistic departures on the Hero from the Magic. It has a 3.2 inch screen offering 320 x 480 HVGA resolution, and at the bottom of the phone is the trackball and 6 buttons, although the buttons on the Hero are in a different arrangement to that of the Magic.

Also the same is the 1350 mAh rechargeable Lithium-ion battery, and the distinctive HTC ‘chin’, jutting out at the bottom of the phone. Specced up is the camera, at 5 megapixels, and also added, to the delight of many I’m sure, is a 3.5 mm headphone jack. The phone will come in two colours, white and mocha black. The white model has a teflon treatment added to protect the surface, and both colours feature a protective coating on the screen.

HTC’s creed in approaching these aspects, HTC Sense, is a focus on 3 driving thoughts: Make it Mine, Stay Close and Discover the Unexpected. So where the Hero has really moved ahead is in the areas of usability and customisation. On the Apple iPhone 3G and iPhone 3GS, you flick sideways on the screen to view more of your available apps. On phones like the Sony Xperia and LG Arena you access various screens by way of a rotating cube or panel interface on the screen. The Hero uses what it calls Scenes, which is like a hybrid of the two previously mentioned multi-screen solution. Whereas on the iPhones you flick to view another page and are presented with another screen of app icons, flick away – either left or right – from the home screen of the Hero, and you see 6 other self-assigned screens. You might assign one screen for your Twitter app. another for a news feed, another to get straight into your email. And to take this customisation even further, you can have 10 different sets of these Scenes – one might be all work-related apps or widgets, another for social media… you compile the collections of apps the way you want them, the way you want to use them. That’s an example of the Make it Mine in action.

The Hero also uses the very same touchscreen gestures as the iPhone. So to zoom in and out of a photo or a webpage, it’s just a matter of pinching together or pushing apart two fingers on the screen. This capability works particularly well when browsing the web with the phone’s WebKit browser, with the added trick of re-formatting the text when you zoom in and out on a web page, making the text all there within the screen space, so there’s no need to flick left and right on the page to read all of the text.

Stay close? Just as with some of the other soon-to-be-released HTC phones, the Hero employs what the company calls People-centric Communication. One example of this is that from within any person’s contact details in your phone’s address book, you’re able to pull up any text messages you’ve exchanged with that person, as well as any voicemail, voice notes, phone calls made/received, Facebook updates, Twitter tweets and Flickr photos. One click on the contact’s address and you can be shown that location on Google Maps. It’s all just a very smart and very powerful extension of a regular phone’s call register, and a feature which is sure to be copied by other phone makers.

Discover the Unexpected? Try the Hero’s Footnotes application. Say you’ve just had a great lunch at a new restaurant. Go out the front, and take a picture of the place. The phone’s GPS will give you the address details, and record the location a a map. Give the restaurant a star rating, make some text notes, even record a voice note. Then you have a record of place on your phone for ready reference, or you can email the file you’ve just created to a friend. What you choose to use this app for is totally up to you – use it to record the sights and sounds of your holiday, go back to your hometown and create a walking history of your life growing up, create your own mega shopping guide. Again, the app is there for you to use as you want, and use with a great deal of ease.

Back in February this year, when HTC released their first Android-powered phone, the Dream, we said in our review that the “result is still an enticing phone, but we can’t help but think that future Android-based offerings might be even better value”, and “that at last the iPhone 3G has some serious competition.” In the Hero I think we’re really seeing the promise of the Android OS, and given that it’s still less than 6 months old I think it’s a pretty exciting time ahead for phones running on Android. And kudos to HTC, for knowing that just making a phone with a touch interface is not what makes the iPhone so loved. Touch is great, but it’s real about ease of use, and ease of customisation through the addition of apps.

Other reviews have mentioned problems with lag, but based on my admittedly short time with the phone I saw no such problem. But I didn’t get to test things like the GPS and playing YouTube videos, so I’ll be sure to check these out when we get a production review handset.

So, when is the Hero going on sale? It will be in stores anytime between now and the end of October. Which carriers? No word on that. HTC are talking to interested carriers now, and you have to think that the sign-off of those arrangements are the only thing stopping the Hero from being available now. How much? Again, no confirmed carriers, no confirmation of price. But I’d make a pretty confident guess that it will be very much in the price point area of HTC’s own Magic and the Apple iPhone.

Once we get our hands on a production model of the Hero we’ll publish a full review – watch this space!