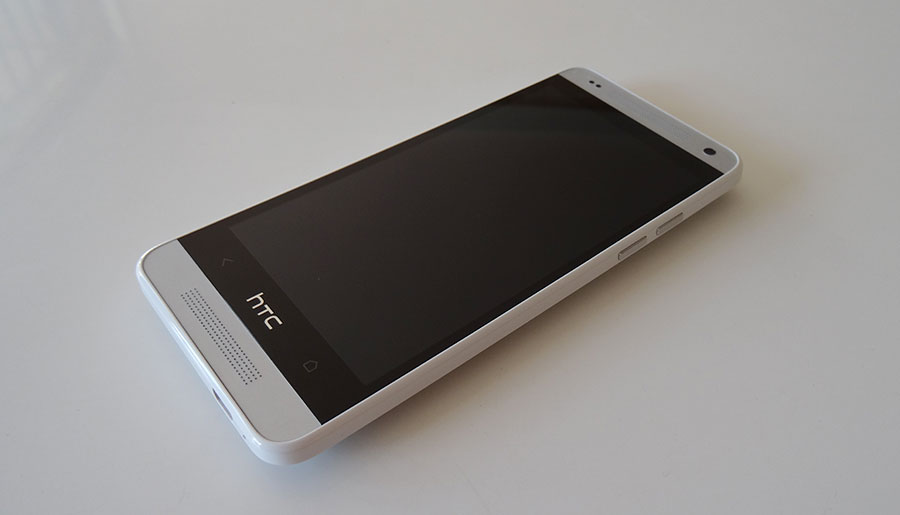 The flavour of the moment seems to be big phones, with devices starting at the 4.7 inch screen size mark, and pushing all the way past six inches into phablet territory. Not everyone wants a massive phone, though, and with that in mind, HTC is shrinking its One handset to suit.

Marketed as a miniature version of a handset released by HTC earlier in the year, the One Mini aims to bring the excellent performance of HTC’s current flagship to a smaller size, for hands that don’t particularly want the size of a big phone and prefer something more readily pocketable.

Under the hood, the HTC has equipped a dual-core Qualcomm Snapdragon 400 processor clocked at 1.4GHz, partnering it with 1GB RAM and 16GB storage. No microSD slot is included on this body, and the back can’t be removed.

Google’s Android is the operating system of choice, with the recent 4.2.2 version included, also known as “Jelly Bean.”

Two cameras are present in this handset, with the front-facing camera using a 1.6 megapixel module with back-side illumination on the sensor, while the rear camera is the same one out of the HTC One, the UltraPixel back-side illuminated camera with a dedicated image processing chip working alongside it.

HTC is relying on Beats Audio for the multimedia in this handset, and has included the Beats headphone enhancing technology on the phone, which also helps the BoomSound dual-speakers sitting on the front of the phone.

Few buttons and ports exist on the handset, with a microUSB below and a 3.5mm headphone jack up top representing the ports, while the buttons are taken care of through a power button on the top, separated volume buttons on the right edge, and soft buttons for “back” and “home” on the front under the screen.

Even if the 4.7 inch screen size doesn’t quite match the 5 to 5.5 inch size smartphones being released by other manufacturers, the HTC One is still a relatively big handset, and that’s not what everyone wants, which is probably why HTC has put the handset on a diet with the One Mini.

In this handset, the screen drops to 4.3 inches, and effectively provides a quicker way for people familiar with the 3.5 to 4 inch iPhone size to jump over to a similar size.

It also affords iPhone users to jump over to a phone with a similar construction, which is an area we’ll touch on first, because like the HTC One, the design and build here is excellent.

While most smartphone makers seem to have an obsession with variants of plastic, HTC bucked the trend this year when it decided to use an aluminium unibody for the HTC One, going back to what we remember when it first came out with the Legend several years ago. In the smaller One Mini, it continues that trend, albeit with a slight change to the design.

That change is a glossy plastic edge, making the handset have a two-tone look (white and silver on our review device), while also making it a touch easier to grip thanks to that use of plastic.

The design is pretty close, though, and even includes the same HTC BoomSound dual-speaker configuration on the front, the two soft buttons for back and home, and the front-facing camera at the top right. The rear cameras are the same 4 megapixel – sorry, Ultrapixel – modules, but the flash location is now above instead of to the right of the camera.

Overall, we’re delighted to see aluminium is still being used, which goes a long way to make the handset feel strong and sturdy. Close up, the metal doesn’t feel quite as finished as it was in the One, and we noticed a few scratches early on (which could easily come from other reviewers using the phone before us) as well as a slightly rougher feeling from the metal speaker grill.

From an operating system point of view, the One Mini arrives with one of the latest versions of Android, 4.2.2 “Jelly Bean,” which is being rolled out to HTC One owners right now.

HTC’s modifications are all here, such as the customisable shortcut dock with app menu link in the middle, multiple home screens with widget selection, and two choices of grid size as well clock and weather forecast in the menu.

HTC’s magazine-inspired feed of news and social updates is here too, left over from the HTC One and still called “Blinkfeed.”

Support for social networks is included – such as Instagram, LinkedIn, Twitter, and Facebook – but unfortunately you can still only select the news feeds approved by the service HTC relies on for Blinkfeed to work.

If you use other services, tough luck, because not only can you not add your own RSS feeds, but you also can’t remove Blinkfeed.

You can opt to not make it your default homescreen, which is precisely what we did, since it was just so frustrating that we couldn’t add news sources that we wanted.