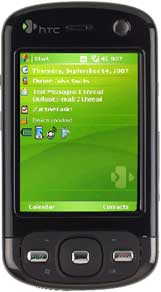 HTC’s P3600i is a fully featured smartphone that benefits a great deal from having TomTom’s excellent navigation software built in. It’s a bit bulky for those who prefer their mobiles on the slim side, but that gives it the luxury of enough screen space to be easily usable as a GPS and as a Windows Mobile device.

The P3600i (which for a variety of wacky branding reasons may be known locally as the Dopod 810x or CHT9100, depending on where you’re reading this) is a 3G smartphone running on the new Windows Mobile 6 platform. HTC/Dopod has trod this space before with the Dopod 810, and the P3600i isn’t honestly that different a device; the in-built memory footprint is a little larger, up to 256MB of ROM, and the whole shebang runs on a faster Samsung 500Mhz processor. Windows Mobile 6 means it’s got the latest raft of portable office and multimedia features to boot. Unlike many smartphones that sell purely to the business crowd, the P3600i also plays in the fun consumer space, with a decent 2.0 megapixel camera on the rear of the phone.

Where the P3600i differs hugely from the Dopod 810 is in the fact that it not only has an embedded GPS receiver, but also GPS software included in the bundle. It’s not just any hastily slapped together package, either – it’s the rather excellent and easy-to-use TomTom software package, with Australian maps to go along with it.

Our test sample was an early prototype, and came without a car mounting arm. HTC representatives assured us that, like previous models one would be included. This made in-car solo testing a little difficult, but with a navigator along to hold and interpret the device it was easy enough. The one factor to bear in mind with the P3600i is that by default it’s a portrait, not widescreen device. Still, in our tests the display screen was large enough to quickly make out details while driving. Likewise, the TomTom interface features plenty of large, colourful and above all obvious buttons; even those who’ve never used a GPS before should be able to quickly get the P3600i directing them quite rapidly.

On the downside, as the TomTom software runs as an application within Windows Mobile 6, it does take a little longer to get started and synchronised than a pure GPS usually would. Likewise, if you’re running other applications (or need to leave other applications open) and they crash the phone, they’ll take the GPS with it; this happened to us on one occasion while driving with the P3600i. Taken as a pure phone, it suffers the same fate as every other smartphone or Blackberry out there; these aren’t small devices to hold up to your ears or stow in your pockets.

The P3600i takes a very capable 3G Smartphone and adds the dangling carrot of easy-to-use GPS functionality. There’s very little not to like about the phone itself, although naturally you’ve got to be able to justify the price tag.