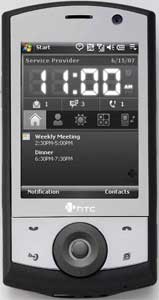 HTC Corp. today announced availability of the HTC Touch Cruise, the latest member of the HTC Touch product family and the first Touch Flo device to feature built-in GPS (with mapping software to be installed by customers) for personal navigation.

The HTC Touch Cruise comes bundled with Co-Pilot Live Version 7 navigation software, so users on the move will easily be able to find the fastest routes to their destinations, and locate restaurants and services on the way.
Building on the popularity of the HTC Touch and the HTC Touch Dual, the Touch Cruise is a Windows Mobile 6 Professional device with MS Direct Push email, and includes 3.5G-HSDPA wireless connectivity.

The device features HTC’s TouchFLO technology, which enhances finger touch scrolling and browsing of web pages, documents, messages and contact lists, controlled by simply sweeping a finger across the screen. TouchFLO also offers the ability to view photos and photo slideshows using on-screen controls and to zoom and rotate images with only one hand.

Users can simply sweep their finger up the display to launch an animated, three-dimensional interface comprising three screens: Contacts, Media and Applications. The interface can be spun by swiping a finger right or left across the display, providing efficient access to the features consumers use most.

As with other HTC Touch devices, the HTC Touch Cruise features the HTC Home screen, providing one-touch access to emails, text messages, calendar appointments and contacts, as well as current weather conditions and forecasts for hundreds of cities around the world.

The new Touch Cruise boasts of super fast HSDPA/3.5G connectivity plus Wi-Fi and Bluetooth, making it a highly connected device for consumers on the move. Its 2.8″ screen is great for enjoying mobile multimedia and the built-in Windows Media Player is ideal for music and movies.

Other key features include a 3 megapixel auto focus camera, built-in FM radio and microSD memory card slot.
The HTC Touch Cruise has an RRP of $1,149 and is available now from authorised Brightpoint mobile phone retailers and dealers.