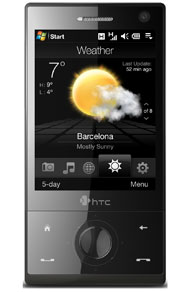 HTC’s Touch Diamond marries the sophisticated utility of a smartphone with the elegance of a slim ‘candy bar’ phone, and the result is a high tech phone that doesn’t actually look too ‘techy’ at all. Despite that, it is quite capable, being a 3G phone with integrated wireless, satellite navigation capabilities and a very crisp screen to boot.

The standout feature is the TouchFlo interface, which works a bit like an iPhone and lets you glide a finger across the screen to access the phone’s many features. There are plenty to choose from: satellite navigation and mapping, email and web browsing are in offer. TouchFlo is fun to use and removes the need to use the clunky Windows Mobile interface at all, if you’re not keen on it.

The Touch Diamond also impressed us as a very capable media player, with 4 GB of onboard memory for playing back music or compatible video files.

If you’re after a handset that isn’t clunky but offers an easy interface, this is a solid choice.