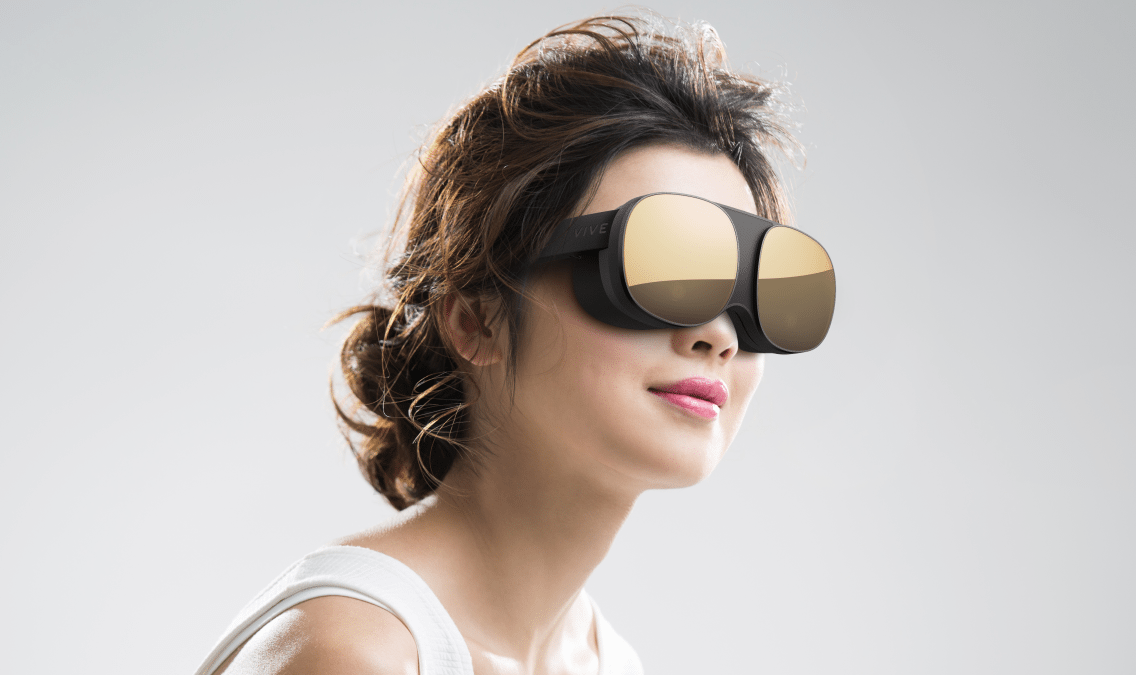 The HTC Vive Flow is a new standalone VR headset aimed at people who want a small and lightweight device that can provide an immersive ‘virtual reality’ viewing experience. They can use it for consuming media, socialising with friends and colleagues. They can even use it to relax and calm the mind with specialised VR apps. The HTC Vive Flow is not aimed at gamers or meant to be a competitor to the Oculus Quest 2.

HTC is hoping that the Vive Flow will find a new market in VR and in some ways fill the gap left open by the now defunct Oculus Go and Google Daydream platforms. So how does it fare?

At just 189 grams, the Vive Flow is by far the lightest VR headset on the market. They weigh significantly less than the 571 grams of the Oculus Quest 2. Part of the reason HTC was able to get the size and weight down is the lack of an onboard battery, which means you will need to keep the Flow tethered to a portable power bank. For reference, HTC estimates five hours of continuous use with a 10,000mAh power bank.

The Flow worked with pretty much every power bank I had laying around, and even worked fine in my car’s USB port. HTC says it should also work when connected to a USB port on an airline seat armrest.

The Flow’s ‘sunglasses’ form factor doesn’t require a top head strap. This means you can use the Vive Flow while wearing a cap, and it won’t mess up your hair.

The side arms are designed to press against your head above your ears rather than rest on your ears like a traditional pair of glasses. This design can place an uncomfortable amount of pressure on larger head sizes. I found that the pressure mostly subsided after a few days as the arms stretched and adapted to my head.

With no other supporting straps, I also found that the slightest of head movements would cause the arms to slide down. The is compounded by the small sweet spot of the Flow’s displays, meaning I had to regularly adjust the headset to maintain a clear picture.

A really nice feature of the Flow is that you don’t need to wear glasses. The built in diopter allows you to adjust each lens to match that of your prescription.

Included in the box are some fabric eye shields that slap on magnetically and are designed to help block out light. If you want to be more aware of what’s going on around you there’s the option of removing the eye shields and just using the nose insert. (It wasn’t included with our review unit so I wasn’t able to test how this looked).

The Flow is powered by Qualcomm’s XR1 chipset which is a last generation chip found on the original Oculus Quest. It has a respectable 64GB of onboard storage with no support for expansion. To keep everything running cool, there’s a fan on board that was rather loud in our review unit.

The arms of the Flow also house the audio speakers, which were largely comparable to the ones found on the Quest 2 in terms of volume and spatial audio support. The Vive Flow also connects to Bluetooth headphones, which is a must for when you’re out in public.

The Vive Flow uses pancake lenses as opposed to the thick and bulkier fresnel lenses normally found in most VR headsets today. Underneath the lenses is a 3.2K resolution LCD display (1600×1600 pixels per eye). This is technically lower resolution than the Quest 2, with text in particular looking noticeably less sharp. The field of view is also narrower at 100 degrees and the display runs slower at 75Hz.

Clearly, HTC had to make some tradeoffs on the display front to accommodate the pancake lenses and to keep battery consumption to a minimum. Given the Vive’s mostly passive content focus, the paired back display does an adequate enough job.

Double tapping a button on the headset switches to passthrough mode, but as with the Quest 2, the ‘outside’ view is in black and white and in low resolution. Admittedly, it’s less of an issue on the Vive Flow since the glasses form factor makes it quick and easy to physically flip them up and interact with the real world.

For navigating in VR, the Vive Flow doesn’t come with any external controllers and instead relies on your smartphone as a virtual pointer. The smartphone interface is cordoned off into four sections, each representing a different virtual button. But since you can’t feel the virtual buttons, I regularly found myself pressing the wrong thing. The pointer tracking can also drift relative to the actual position of your phone, forcing an awkward wrist bend to make a selection.

The phone-control approach is downright cumbersome and it makes interacting with the Vive Flow a chore. HTC says that controller-free hand tracking is coming at some point in the future but wouldn’t provide a timeframe. (Customers should be wary of buying a tech product based on the promise of future software updates).

The Vive Flow has an onboard app store. HTC claims there are more than 100 supported games and apps but most feel like Oculus Go or Google Cardboard-level content from years ago. Some apps don’t work properly on the Flow due to controller tracking issues, so the collection needs better curation.

The exception is the handful of guided meditation apps such as Tripp and Cosmic Flow. These do a convincing job of transporting you to a more tranquil environment with serene music while following along to breathing exercises.

Headsets like the Quest 2 are becoming an increasingly popular and fun way to stay in shape. There are a number of fitness-focused VR apps hitting the market and the Vive Flow’s lighter and more streamlined form factor would’ve made it ideal for this purpose. Unfortunately, the limited input scheme and the loose fitting design means the Vive Flow is ill equipped to handle more rigorous applications. This seems like a missed opportunity given the Flow’s focus on health and wellness.

There are apps for streaming 360 video content but the heavy hitters of the streaming world such as Netflix, YouTube and Amazon Prime aren’t available natively on the platform.

HTC’s solution is to mirror your phone’s screen to the Flow via Miracast. The feature works surprisingly well. Regardless of whether I was beaming Netflix, YouTube, Kayo, Disney Plus or Prime Video, the audio always remained in sync and the quality of the video looked sharp enough on the cinema-sized VR screen.

However, you will need to have an Android phone that supports Miracast for this feature to work (iPhones aren’t supported). HTC maintains a list of compatible smartphone models on its website.

Modeled after a pair of sunglasses, the Vive Flow represents the start of an exciting new breed of VR hardware that does away with a lot of the bulk and heft that comes with traditional headsets. Outside of a few ergonomic issues with the fit, the Vive Flow largely nails it when it comes to form factor, delivering a headset that is easy to carry around and wear as needed.

However, there’s no getting around the fact that the $479 Oculus Quest 2 does everything the Flow can do and much more, albeit with a more traditional design.

The Flow lacks proper motion tracked controllers or any form of hand tracking, has limited apps and provides an underpowered VR experience. With this in mind, the Vive Flow needs to do more to justify its lofty price tag of $749.