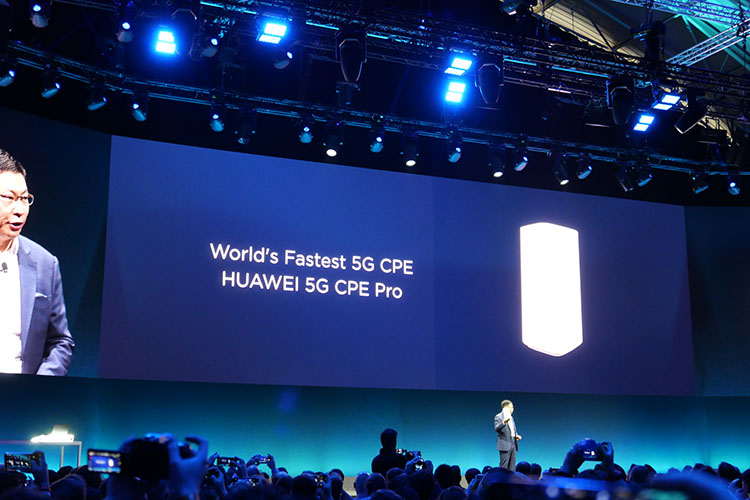 One of the things that 5G brings is high speed data. How high? Maybe ten times the speed of the NBN. Which is why Huawei is introducing the Huawei 5G CPE Pro.

You will recall that in Australia the NBN was designed to provide up to 100Mbps downloads. For those with fibre to the premises, it’s likely that newer innovations could well increase that. But its going to be problematic going beyond FTTN – Fibre to the Node. And that’s a lot of us. Indeed, that will be me … in a few months when the NBN belatedly makes its way to my premises.

So of course Huawei has developed a solution for 5G use in the home.

The Huawei 5G CPE Pro is a home (or business) Wi-Fi router with 5G connectivity. It uses the same Balong 5000 5G chipset used in the forthcoming Huawei Mate X tablet/phone convertible. As such, it will support both NSA and SA – Non-Standalone and Standalone – 5G infrastructure. SA is the way of the future. It also works with 4G connections.

In one sense, future-proofing a phone is relatively unimportant. Those purchasing a high end 5G phone in 2019 are likely well-heeled enough to buy a newer one in a year or two. But fixed modems are a different matter. They are expected to just do the job for years on end.

Your network provider’s data pricing will likely also impose some weight on your choices. But if the massive increase in data allowances in 4G mobile plans in recent years is any indication, users of reasonably normal data volumes may find 5G preferable to landline NBN connectivity. Huawai says that the Huawei 5G CPE Pro is capable of allowing a 1GB video file to download in just three seconds. It adds that it will allow effective 8K video playback.

(Will we ever have significant 8K video distributions? I doubt it, but nonetheless, it’s good to be prepared.)

Since the Huawei 5G CPE Pro provides a speedier pipe to the outside world, perhaps its as well it also provides speedier pipes to the devices in your home. It implements Wi-Fi 6, also known as IEEE 802.11ax. According  to Wikipedia, this allows somewhat higher throughput per device than 802.11ac, but its main advantage is in supporting high speeds in more devices at once, as well as providing lower latency. Again, low latency is vital for effective game play. But according the Huawei, it allows a maximum throughput some 2.8 times that of 802.11ac, up to 4.8Gbps.

Also announced was a weather-proofed version, called the Huawei 5G CPE Win. The “Win” has nothing to do with Windows, the operating system. I guess it is a reference to window, a hole in a wall. The idea is that this can be installed outside on a wall, which can in some circumstances usefully improve signal quality.

Finally, also announced was the Huawei 5G Mobile WiFi, which (of course) uses the Balong 5000 5G chipset, but is portable. It packs an 8,000mAh battery and can be used as a powerbank.

So clearly, when it comes to 5G, it’s all happening at Huawei.