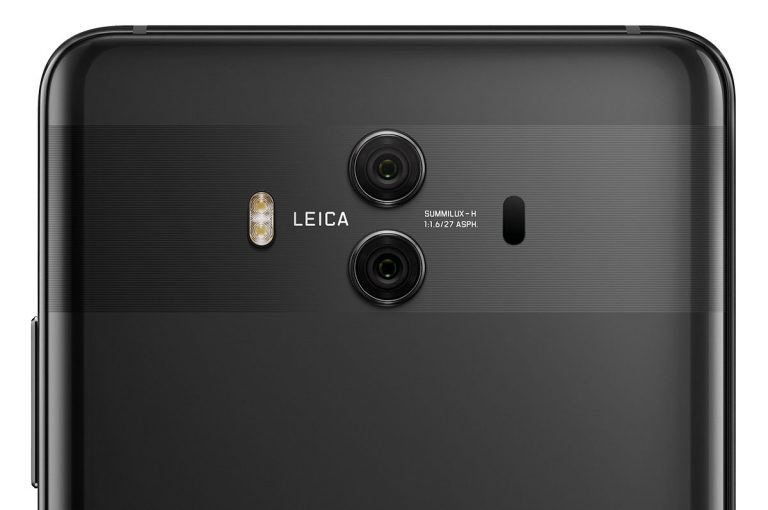 And it, along with the even larger Huawei Mate 10 Pro, is pushing smart phone tech into new areas, with Neural Processing.

First, to basics. The Mate 10 screen is still 5.9 inches in size with a 16:9 aspect, but resolution has been bumped up from full HD to QHD, or 1440 by 2560 pixels. Rather than the more or less conventional glass front/metal back, it is now full 3D glass on both sides, with a “barely there bezel”. The type of glass used is not mentioned.

The Mate 10 Pro ups the screen size a little to a full six inches, but also moves to the currently fashionable 18:9 aspect and a 1080 by 2160 pixel resolution. Perhaps more importantly, it uses OLED screen technology, unlike the standard Mate 10 which sticks with LCD. Huawei says that this ups the NTSC colour gamut coverage from the Mate 10’s 96% to 112%. It also gives it a 70,000:1 contrast ratio. That last seems to be a more modest claim than what is typically made for OLED.

Huawei has done quite a bit of work on connectivity. Most obviously, the headphone socket has gone. The only wired connection is the USB Type -C socket, but this appears to have been upgraded so that it now supports video, specifically DisplayPort 1.2. Which means you can plug your phone into any TV – a HDMI adaptor should work.

Bluetooth is version 4.2 with Low Energy support. Improved: the aptX, aptX HD and LDAC codecs. All are higher quality than the basic SBC codec used in phones but to take advantage of them requires support in the speaker or headphones. Many – but not all – support aptX. Some newer models support aptX HD and very few support LDAC, which is a new codec from Sony. You’ll probably want high end Sony Bluetooth headphones and speakers for this. NFC is supported.

The processor is Huawei’s own Kirin 970, up from the 960 of the Mate 9. With this one it has gone to 10nm fabrication. There are four 2.4GHz cores and four 1.8GHz cores, along with a Mali-G72 graphics processor and support for LPDDR4X memory. The processor supports Cat 18 LTE, which seems to mean download speeds of up to 1Gbps.

And then there’s the Neural Network Processing Unit. Neural networking is a hot thing in computing these days. Actually, they’ve been talking about it for years. Basically, it shifts the paradigm of computing somewhat from high throughput in a small number of processors to a larger number of massively interconnected processors. Sort of like the brain, except that the human brain has, ahem, a hundred billion neurons.

Anyway, here’s what Huawei has to say on the NPU:

That thing about HiAI might be important. The platform “is an open, mobile AI computing platform for third parties to create new and imaginative AI applications”. If it really is open, the developer world ought to be producing interesting new products and capabilities in short order.

The storage level of the Mate 10 Pro is fixed, but you can add microSD storage to the standard Mate 10 to increase its capacity.*

The phones run Android Oreo 8.0 with Huawei’s own EMUI 8.0 skin.

The camera is the same as that in the Mate 9, and very different as well. It’s the same in that it is a dual camera Leica collaboration with 12 megapixel colour unit and a 20 megapixel monochrome one, along with some fancy image processing that combines the two. But rather than f/2.2, both of these camera have a maximum f/1.6 aperture. That is, I think, the widest on the market at the moment. They use Leica SUMMILUX-H lenses.

The monochrome camera is a kind of assistant, helping with focus and providing additional data to allow the colour image to be tweaked. Naturally it includes the ability to fake softer bokeh. There’s also a “2x Hybrid Zoom”, which would appear to work the other way around, using the colour information from the colour unit to colourise the tighter monochrome image.

Video of up to 4K is supported.

Both phones use 4000mAh batteries with low voltage fast charge support. Huawei says that from a mere 1% charge, ten minutes will get it to 20% and half an hour will take it up to 58% charged. Impressive.