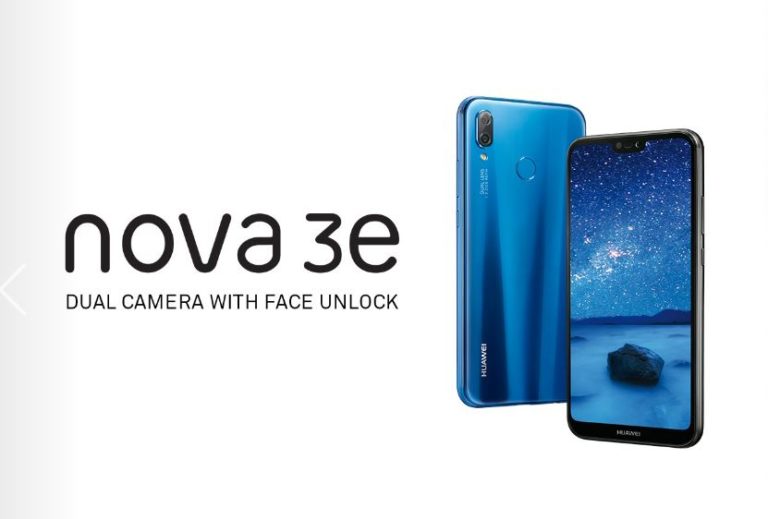 The Huawei Nova 3e offers many champagne features for a lemonade price. At $399 it is one of the better mass-market ($200-499 range) phones. It is also known as the P20 Lite in some markets.

I am torn. I have used the Nova 3e for a few days. This is straight after using Nokia 6 2018 (Gadget Guy review here) at the same price.

Both have great specifications for the price. This has more ram and a dual camera. But I like pure Android One on the Nokia. However, Huawei’s EMUI 8.0 UI is competent as well.

If both are on your shopping list, I will have achieved some success.

There are those who like the notch screen (as on the iPhone X) and those who hate it. I am not so passionate either way. But, I use Huawei’s handy feature to turn the top of the screen to black giving a faux top bezel. Works well for me.

The review unit is a sample replete with P20 Lite branding. As such, I can’t be sure of the exact Aussie model number. We issue the standard warning that you must buy the genuine model with Australian firmware as it works on all Australian Carrier LTE bands and can make 000 emergency calls without a sim.

Huawei tends to use the ‘Lite’ moniker on phones that bear little resemblance to the ‘heavy’ ones. I suspect this has not worked as well as people expected a P20 Lite to do almost as much as a P20 or P20 Pro. I like that it is not using the Lite moniker here otherwise I would be disappointed in comparison to the other fine phones. Nova is what it is – a mass market phone.

GadgetGuy also reviewed the Nova 2i which was $499 but has dropped to the same price to clear as the Huawei Nova 3e.

It feels good in the hand. The alloy edge gives a nice grip. Yes, both sides of the glass are a fingerprint magnet and the supplied clear plastic bumper case is mandatory. In all, it looks and feels like a more expensive phone, especially in the Klein Blue glass back and alloy sides finish.

We have changed our ‘monolithic’ specifications table to place relevant comments and tests after each segment.

At 5.84” in the 19:6 format very few phones in the mass-market category can compare. The front is almost all screen except for the ‘notch’ and a small bottom bezel.

Huawei uses an LTPS (Low-Temperature Polysilicon) IPS. This means lower power use for higher resolutions. It is also a little lower cost to make.

At 500 nits (white) and 1500:1 contrast sunlight readability is just above average for an IPS screen. It has a wide viewing angle, so you can tilt it to avoid reflections.

sRGB or DCI-P3 ratings are missing. It has pre-sets for default, warm and cold colour. Colours are accurate, if slightly punchy.

The Kirin 659 processor has been around for a while. It must have had an update as the Huawei Nova 3e supports Wi-Fi AC (the old processor did not).

Performance-wise it rates closest to Qualcomm’s Snapdragon 625. The best description is modest performance but more than enough for this phone’s needs.

The processor is in the Huawei Nova series, Honour and P20 lite. There is no stigma with using HiSilicon either – Huawei’s manufacture quality is as good as Qualcomm.

4GB RAM is more than enough to futureproof this at least for Android 9.

64GB eMMC flash is maximum for app installs. The microSD cannot be formatted internal storage/apps. This is an important limitation.

Games-wise it is about 20% slower in graphics. It should play most current mobile games up to 30fps.

We noted it became a warmish 36° in the hand when under load. This is more than acceptable.

To put the processor in perspective, performance is very close to the Nokia 6 2018 but about 50% of its GPU power.

Bluetooth 4.2 supports aptX for better Bluetooth audio to compatible devices. It also supports multi-point (2 devices) connection do you can use it in the car as well.

The earpiece speaker is for the phone only, e.g. it’s not part of a stereo 2.0 setup.

The bottom firing speaker is for hands-free and sounds. It produces a pure mid-signature (no bass, mids emphasised, treble recessed) best for clear voice. It reached 85dB in ringing and around 65-70 for music and voice.

Output to an amp was 30Hz to 15kHz but lacked signal strength (volume). The supplied buds are OK but also suffer low volume.

We tried the device with a pair of Sony WH-100XM2 headphones that support aptX. The signal lacked the volume to drive the headphones.

The fingerprint sensor is accurate and fast every time.

Facial Recognition is new, and it works in most low-light conditions.

An HD video loop with 50% screen in aeroplane mode was eight hours. Under full load, it was empty in five hours. It should achieve 12 hours in normal use – charge it daily at least.

It will charge from 0-100% in under three hours. That is not exactly fast charging.

Importantly it supports VoLTE and VoWi-Fi that is vital if you want to make calls in Telstra’s new small cell areas.

EMUI OS is Huawei’s way of avoiding everything Google as mandated in China. In Australia, we get a full suite of Google apps as well.

Over the years I have seen it go from heavy-handed to a light touch. The learning curve is easy enough. On the positive side, it offers a good suite of management tools.

This version has a new AI engine for things like translation, facial recognition, app optimisation and security.

My only advice is that it is not pure Android and updates will take longer.

As much as these are lovely colours they are fingerprint magnets and can be slippery. Use the poly bumper case.

It is solid with an aluminium frame under glass.

IP rating is not usually in a mass market phone.

It is important to remember that these features not usually in a mass-market device.

First, let me say how much I hate the camera placement. In typical Apple style, it is on the top left rear of the phone. About half the 100 or so reference shots had my fingers in the frame! Give me a centre mount any day.

Huawei’s website states: LCD [flash] intelligent light technology is banishing grainy, poor quality photographs. With a spectrum of 11 colour temperatures for intelligent light rebalancing within different lighting modes and 4 in 1 light fusion, every image in any light comes out clear and bright.

Sorry, we just did not see that. Night shot mode (user selectable and therefore not part of the full auto tests) is a little better but stretches exposure times too much for a handheld shot.

I suspect the Kirin 659 processor simply lacks the power to do the post-processing to produce the amazing results we see on the P20 Pro.

Camera-wise it’s slightly better than average. But the second lens does not do much other than enabling bokeh. You don’t need two lenses to do that – so it is more a marketing thing.

But, we have seen a lot worse. It is better than you can expect in the mass-market category.

The 116MP selfie gives good detail and colour. Its wider angle is good for two people in the shot.

The 2MP camera is for depth information. Our bokeh experiments were not good with lack of delineation between the foreground (focus) and background (out of focus). Again, this is a post-processing issue. Same goes for the portrait mode that produces an 8MP image after post-processing.

Don’t let the outcome of some of the tests put you off. We need to report independently and accurately.

I doubt many mass-market phones could come close (except the Nokia 6 2018 and perhaps the Moto e5).

It looks like a million dollars. Yet it is a mass-market device that delivers more mid-market specifications. It is good value and a good buy

Remember his is a $399 phone. On that basis it is excellent value.