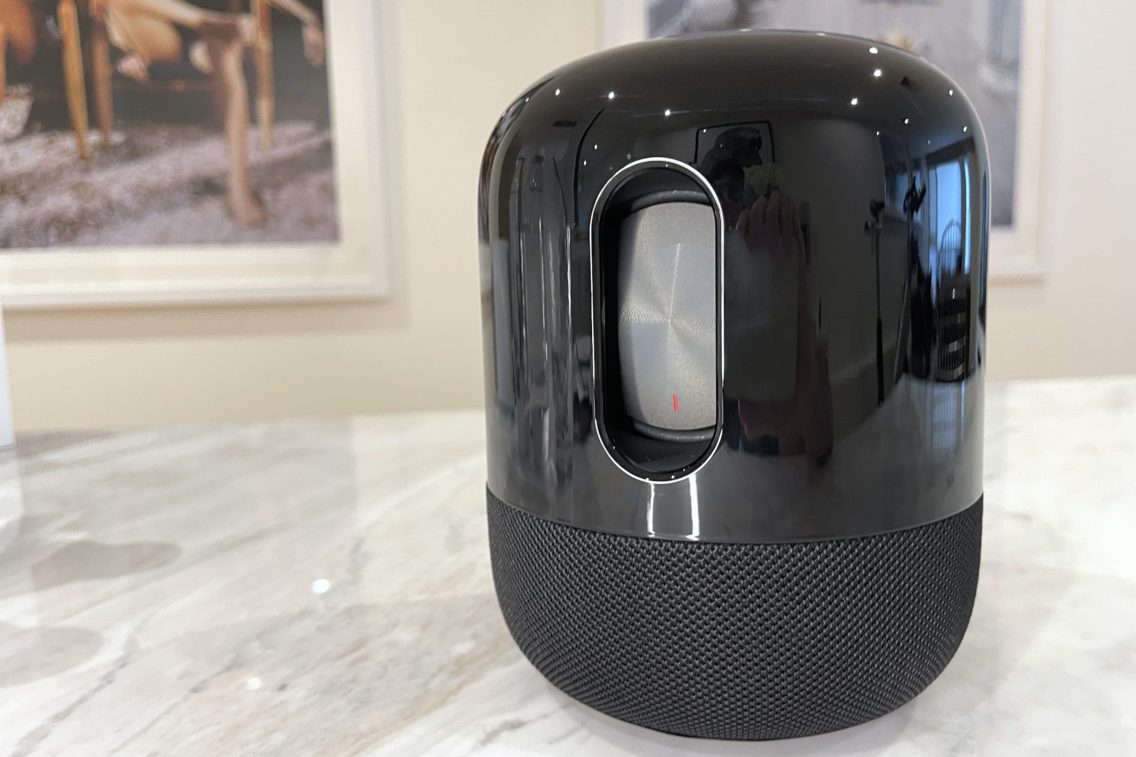 While voice-controlled smart speakers are all the rage these days. For those that don’t want an artificially intelligent ‘ear’ perpetually listening out for your next command, there’s the Huawei Sound. It is a mono 1.0, 360° down-firing speaker.

This is the second model in a collaboration between Huawei and high-end French audio specialist Devialet. The first was the Sound X, released in 2019. While the Huawei Sound reviewed here is smaller and less expensive (A$329), it still features many of the audio tuning features found in the Sound X.

While similar, this shiny newcomer is more speaker than smart – but not in a bad way. There’s no need for voice detection, an AI brain or microphone array, leaving room for 3 tweeters, 2 passive bass units and one 4-inch woofer. The net result is a surprisingly loud Bluetooth speaker with 360-degree sound.]

But also know that in China it is a smart speaker equipped with far-field mics and Wi-FI 5 AC to use Huawei’s proprietary smart Assistant (as it cannot use Google Android or services). These features are still there.

The Huawei Sound is quite striking with a glossy piano-black polycarbonate finish. Moving towards the base, the glossy surface morphs into a black mesh fabric that conceals the 3 full-range tweeters. The 4-inch woofer is in the middle of the cylinder, while two opposing passive radiators are on either side. Dimensions are 147mm deep and 186.7mm high, and a hefty 2.2 kg weight.

The design is unique, premium and versatile. On the downside, the glossy black finish is a fingerprint magnet. As it is a Bluetooth speaker controlled through an Android phone, hopefully, you won’t need to touch it much. Huawei provides a smudge cloth just in case.

There are a number of ways to stream music to the Huawei Sound. Mainly this involves connecting your phone wirelessly and playing songs from your music library of choice. Keep in mind that since this voice control is disabled, there’s no option to ask it to play songs directly.

Android phones need to support the Sony hi-res LDAC codec or it reverts the compressed and lossy SBC. Apple iPhone does not support LDAC, similar to when you use a PC so you only get the basic inferior SBC there too.

There is Universal Plug and Play (UPnP) and NFC support to tap an Android phone and link to its streaming or on-device storage. It does not support AirPlay 2.

LThere is also a 3.5mm AUX-in jack. While a cable is not included, a cable is the best option for playing HD audio files at the highest quality.

Most people will stream ‘normal music over Bluetooth from Spotify or Apple Music. However, thanks to the Devialet collaboration, the Huawei Sound is built to stream high-fidelity audio. This is possible with Hi-Res Audio support and Bluetooth 5 using the LDAC codec. So if your phone supports LDAC, as many modern Android smartphones do, you can stream lossless music from services such as Tidal or Amazon Music HD.

While LDAC can transfer data at up to 990kbps, or 3 times faster than standard Bluetooth, it would be good to see Qualcomm’s aptX HD codec included for wider smartphone compatibility. If you have an iPhone however, you won’t be able to stream lossless quality, just regular music.

Controlling the Huawei Sound is quite simple. Once plugged in, you can adjust the volume, enable mute or access functions with the capacitive buttons on the top. There’s a colourful LED ring that glows different colours depending on what you’re doing. It turns blue when in pairing mode, glows red when muted and displays a mix of blue and orange segments for the volume level. Muting the speaker is as simple as placing your palm on the top of the unit – and is a handy option.

For Android 5.1.1 or later devices, you can take advantage of the Huawei Share feature. Just tap your phone on the speaker, and after a few seconds, it will start playing music, movies or audio books from your phone. Huawei Share uses NFC (Near Field Communication) to make the initial connection, and then automatically pairs via Bluetooth. It’s not supported on iPhones, however. On the downside, even with Bluetooth 5, the Huawei Sound can’t connect to multiple devices at once.

The Huawei AI Life app can set audio profiles, update firmware and link to your Wi-Fi network. It must be downloaded from the Huawei App Gallery, not the versions available on Google or Apple’s App Stores. This is confusing as you’d expect all versions to work with the Huawei Sound. However, support will be added in an upcoming app update. In the end, we relied on Bluetooth pairing and the default audio profile for our tests.

(Update – It appears the Huawei AI LIfe app only works in China where this is a smart speaker. SO its just a BT SBC and LDAC mono speaker here).

Bass response is managed by Devialet’s Speaker Active Matching (SAM) technology. SAM tailors the sound in real time to match the speaker’s characteristics. Huawei says that the unit can reach 90 dB and remain distortion free. Yes, it is true when cranking tunes up to 11.

As an omnidirectional, 360-degree speaker, it should not matter whether it’s placed in a corner or the centre of a room although getting 240V power to the centre may be an issue. Devialet’s SPACE soundstage technology uses a specialised algorithm to separate the audio signal into direct sound, reflected sound and ambient noise.

For our test, we played a variety of music from different devices over Bluetooth. When streaming SBC standard quality music from Spotify and Amazon Music. The Huawei Sound produced a pleasing and fairly balanced result.

When we tried to stream Tidal’s Master-quality music (Hi-Res Audio) from an iPhone, the bass dried up and the mids and trebles became uncomfortably sharp. Obviously, it is Apple’s lack of LDAC support at play here.

Reverting back to SBC standard audio files produced much more listenable results. We also checked Master quality music streamed via LDAP from a Huawei Mate 20 Pro. We found much-improved fidelity, tonal separation and more perceptible soundstage across the board. So remember that to get the best from these you need to stream LDAC Hi-res soubnd.

Our testing software revealed an audio profile that’s bass-mid centric, so it will suit most tastes but perhaps not quite those that play just instrumentals and vocals. Mid-bass starts to build from 64Hz to 100Hz, due to the two passive radiators. Then we see a strong low-mid range at 200-500Hz and a gentle decline to 18kHz. You can read more about how we test sound signatures here.

We compared the Huawei to Apple’s HomePod.

While there’s certainly plenty of volume on both, the Huawei’s low-frequency performance felt muddy compared to the HomePod’s richer, pervasive low-end bass.

We compared playback of Bjork’s Hunter from ‘Homogenic’ (1997), which has an eclectic mix of vocals, instruments, and drum cascades moving from left to right. The HomePod demonstrated noticeable separation and distinguished vocals and mids. The Huawei Sound, again, lacked cohesion with low frequency tones to even things out. This could potentially be improved with a bit of tweaking via the app.

It should be mentioned that the HomePod benefits from adaptive computational audio and beam-forming tech, and is about $100 more expensive. Also, Apple’s original HomePod has recently been discontinued, likely because consumers couldn’t stomach the high price tag.

Overall, Huawei Sound is a solid performer 1.0 mono speaker. Both Devialet’s audio tuning expertise and the lossless audio support raise the bar at this price point. iPhone users don’t get to experience all of the benefits, but you’ll need to listen closely to tell the difference. The Huawei Sound looks great too, is solid and certainly loud given its compact dimensions. It’s also easy to connect to Bluetooth, plus the LEDs and capacitive controls are great. While there are many streaming speakers, if you want one that’s a cut above, the Huawei Sound is a great option.

Huawei Sound
A well-rounded performance with the help of Devialet acoustic tuning.
Features
9
Value for money
9
Performance
8.5
Ease of use
8
Design
8.5
Positives
Sleek, attractive design
Devialet acoustic tuning
Bestr sound comes from LDAC codec - otherwise its SBC on iPhne
Surprisingly loud for its size, with low distortion
Negatives
Piano black finish attracts fingerprints
Huawei AI Life app is confusing to install and probably not for use here
Can only connect to one device at a time via Bluetooth
Is really a smart speaker with far-field mics and Wi-FI but that is disabled in this market
8.6
Buy on Amazon