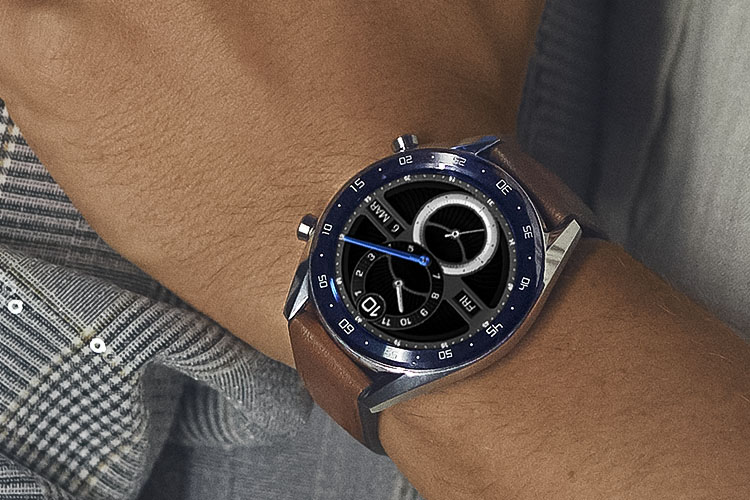 Want the Huawei Watch GT? We’re told that if you’re in Australia, the only way to get it (officially) is as a free bonus with the magnificent Huawei Mate 20 Pro phone. When we reviewed the phone we gave it 5.0 out of 5.0! Does a free smartwatch push it to 5.5/5.0? That offer is available until 28 February 2019.

What is the Huawei Watch GT?

This model is styled as a sports watch. It’s available with a silicone rubber wrist band or, like the review model, with a silicone-backed brown leather band. The body and is stainless steel. The bezel is ceramic. Huawei says that the watch is only 10.6mm thick. Both my digital callipers and my Vernier callipers say 11.9mm. Whatever. I’m not fussed about 1.3mm and they may be measuring somewhere different. (Plus, I’m always reluctant to tighten the callipers too much, lest I cause damage.)

The overall diameter of the body is 46.6mm. Weight: 62.6 grams. The bezel is etched with zero to 60 markings around its edge. Since the bezel is fixed, these would seem to be decorative rather than useful.

On the right-hand side at around two pm and four pm are control buttons. You can exercise additional control using the touch screen. Huawei doesn’t mention the material used across the screen. Since the bezel is raised by around half a millimetre, it is to some extent protected when placed face down on a flat surface.

Huawei says that the watch is water resistant to five atmospheres. Indeed, two of the exercises the watch can track involve swimming.

The active display area of the face is 1.39 inches in diameter (I measured 35.7mm, which works out to 1.4 inches). The display is AMOLED and has a 454- by 454-pixel resolution (square equivalent). That works out to 326ppi. In practice, the only way I could make out the dot structure was by employing a loupe.

The watch packs plenty of awareness:

It connects to your phone via Bluetooth. It does not have NFC, so there’s no tap-to-pay capability.

There’s only a modest amount of storage inside by modern standards. Huawei quotes it as “Internal ROM 128 MB, internal RAM 16 MB”. I’m going to read this as 16MB of working memory for the CPU and 128MB of storage (even though “ROM” means “Read-Only Memory”).

As is the way of these things, the watch really relies on connection to an app on your phone. The Huawei Health app requires iOS 9.0 or later, or Android 4.4 or later (with 2GB of RAM).

One thing that sets this watch apart is battery life. It is rated at “14 days for typical use”. Battery life is a weakness of smart watches. I could see getting in the habit of a weekend charge instead of a nightly one. A small white puck is included in the box, along with a USB Type-A to USB Type-C cable. You plug the Type-A end into any old phone charger and the Type-C end into the edge of the puck. It snaps onto the back of the phone magnetically. Charging takes up to two hours.

The Huawei Watch GT comes with a slim, multilanguage “Quick Start” manual. The English page – there’s just one page – shows you, what the two buttons do and how to charge up the watch. And then it says, essentially, “install the Huawei Health app on your phone and it’ll take it from here.” Which is what I did of course.

The app installation went smoothly – I used a Google Pixel 2 XL phone, so I went to the Play Store. The app performs a number of functions. It gathers the data provided by the phone on heartrate, steps, path travelled, and other movements (so it can deduce things about your sleep). Later it presents all this stuff in a useful way. It also provides instructions on using the watch. And it sets up the connection to the watch.

When I tapped the button to add a device, I was momentarily perplexed because there were three devices shown, and none of them was the Huawei Watch GT. But there was an update button. A tap on that, followed by granting permission for the app to hit its home servers for information, downloaded some more devices. One was this watch. A tap on that and the app searched (via Bluetooth) for it, and quite quickly found and connected to the watch.

Then the app declared that the firmware on the Huawei Watch GT needed to be updated. That turned out to be a 4.88MB download, bringing the watch’s firmware up to version 1.0.3.88. It downloaded quickly to my phone, but the transfer to the watch took somewhere between twenty minutes and half an hour. Bluetooth isn’t the fastest for transferring large amounts of data. Still, it went smoothly if slowly.

When that was done, the app reported that … another firmware update was required. That one was 8.04MB and was version 1.0.5.22. Another fast download to the phone and another slow transfer to the watch. As with the previous upgrade, the installation itself, after the transfer, took five or more minutes.

Then I had other stuff to do for a while, away from phone and watch. When I came back an hour later, I donned the watch and went to check the time. But the watch showed the download screen instead. That is, the watch was being loaded with yet another firmware from the phone. That must have been an automatic upgrade since I hadn’t asked for it. When that was finished and installed, the firmware was now 1.0.5.36.

That was more than 48 hours ago, so I can confidently say the firmware isn’t upgraded every five minutes.

Here’s what you can do with the watch:

Going for a walk

I used the Huawei Watch GT to track several walks, leaving my phone behind. That’s the advantage of having GPS built in.

To do this you press the 4pm button, scroll down and choose “Outdoor Walk”. The watch then starts looking for GPS satellites. In my case, it typically took ten seconds to find enough of them, whereupon I could press the “go” button and start my walk. The watch displayed time, distance and steps, pace, moment by moment heartrate and calories used.

When I finished, I pressed the 2pm button and then I could hit the stop indicator on the screen. And that was it.

The watch uploaded the data to Huawei Health app. That included a very good, and quite accurate map of my travels, along with plenty of detailed information – and graphs – showing my heartrate, elevation, calorie consumption and so on. I could zoom these graphs for more detail. It seems that the Huawei people are detail people, so they hold nothing back.

The heart rate monitor seemed to work rather more reliably than most. The watch was comfortable in the night when I was sleeping, and the sleep tracking was detailed as well. That breaks things up onto deep sleep, light sleep, REM sleep and awake, and gives you an overall score based on Harvard sleep studies.

However, when out walking at night, and when moving around in bed, the green light used by the heart monitor did seem to glow rather brightly, attracting attention.

The watch also generates periodic reminders to do a little exercise if you are sitting around for too long. You can switch that off.

At one point I accidentally touched the “Lock” icon on the quick access page. It’s easy enough to do, because it’s right in the middle. It flashed up a line of instruction on how to unlock the screen. It was there for a second or two, which is about how long it took me to realise what I’d done. Then it disappeared. I’d half noticed something about holding something, but it was too late. In the end I had to reboot the watch (hold down the top button for some seconds) to restore it to normal functionality.

I checked after that. You hold down the 4pm button for several seconds to unlock the watch.

I rushed through this review a little because you’ve only got a few weeks to get ahold of the Huawei Watch GT with your purchase of a Huawei Mate 20 Pro. So I did not run down the battery to see how long it actually lasted.

But that was 72 hours of hard use. It included the three firmware upgrades and a lot of detailed exploration by me. Which meant a lot of screen time. One function I didn’t mentioned earlier was a “Show Time” function. Huh? Isn’t that the whole point of a watch? Actually, this function keeps the display switched on for five minutes. That can be useful if you’re timing something, taking photos of the screen or something. I used that a few times as well.

I’d say 14 days of normal use is a very reasonable expectation.

The Huawei Watch GT is very handsome. It works well. It gathers stats with sufficient detail to warm the heart of any data nerd. Its GPS tracks movement well. You can swim with it. You can sleep with it.

And in terms of value for money, it’s a real bargain since you get it for free with a phone you were going to buy anyway. You can read more about the bonus offer here. And about the watch itself at Huawei here.

Features
Performance
Ease of use
Design
Free! (If you happen to be buying a Huawei Mate 20 Pro)
Stylish
Good feature mix
Long battery life
No Wi-Fi
No music playing
4.7