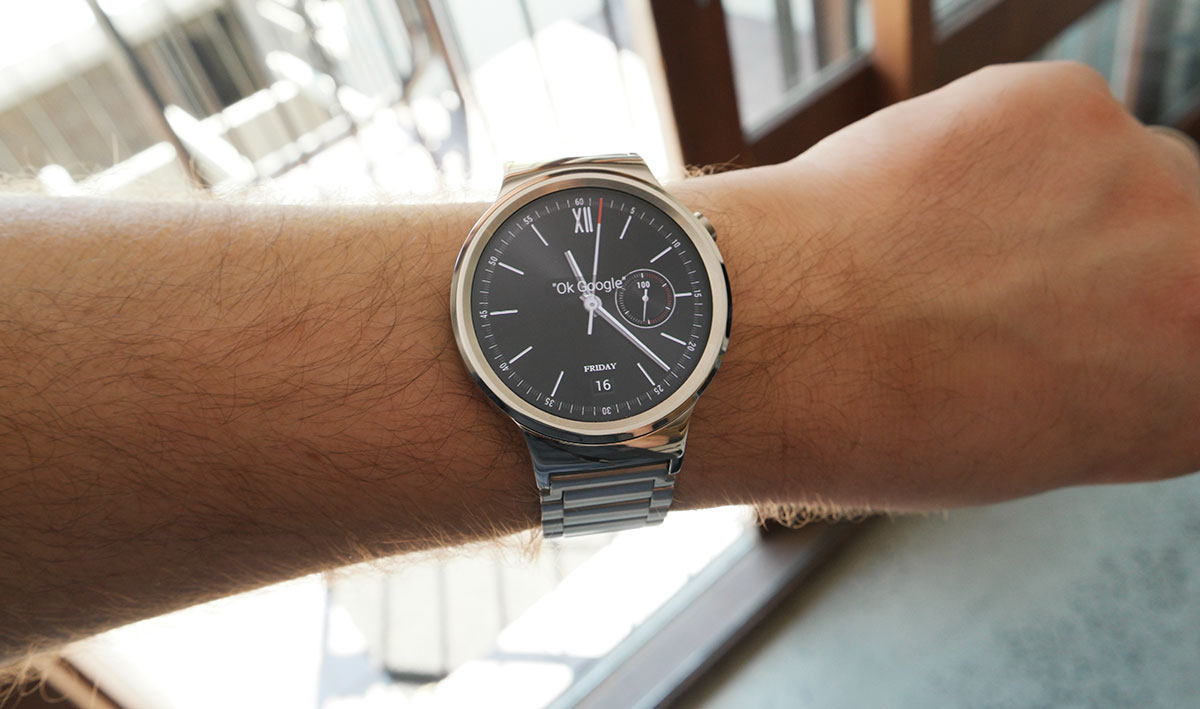 Huawei has even gone above and beyond the call of duty to provide a supply of watchfaces, providing — we kid you not — 39 faces.

Some of these are stock Android Wear, but others aren’t, and while few are really customisable, many give off the impression that you’re wearing a proper mechanical watch, which is a neat illusion.

Beyond the time, Android Wear still doesn’t do much, and notifications alongside music control are pretty much the big deals here, though a few apps are beginning to roll out, with fitness being key.

Over on the comfort side, we didn’t find too many problems with wearing the watch, though if you’re not used to a heavier wristwatch, this isn’t the timepiece for you.

That’s not a bad thing by a long shot, and we’re sure there are some people out there that find the Apple Watch too thin and light. If that’s you, the Huawei Watch is worth taking a gander at.

Compatibility is also strong out of the box, and now that Android Wear has an iOS app, you’ll find that this watch works with either the Apple iPhone or any Android phone the moment you take it out of the box.

That’s great news for people on the iPhone who want a smartwatch but don’t necessarily want to buy Apple’s because this one will fill that gap nicely.

We reviewed it on Android, that said, but it will pair up with an iPhone without problem, though you may not get to add in all the extra watchfaces after it’s installed or play with the Android Wear apps that you can add in, and that’s an iOS thing, as many of these aren’t currently available on Apple’s App Store.

If you have an Android phone, however, you can download extra watchfaces and watch-connected apps until your heart is content and your mobile phone is full, because this supports the same app ecosystem as other Android Wear devices, meaning you can run Jawbone’s Up app, custom watchfaces via a watchface-making app, and generally expand on the smartwatch idea past checking the time and looking at mobile notifications.

Keep in mind, however that this may end up affecting your battery life, which is one area where Huawei’s Watch gets it both right and wrong, and it can go very wrong quite dramatically.

We get it: smartwatches are never going to last as long as their not-so-smart analogue or digital counterparts, and thanks to the WiFi and Bluetooth chips, the processing, the screens, the battery, and all that jazz, you should only expect a maximum of a week or two depending on who makes the watch.

A week or two is highly unusual at the moment, however, and your first night with the Huawei Watch, won’t even deliver you a full day of battery life. Not even close, actually.

In fact, at twelve hours, our battery had diminished to just seven percent. From 100 to 7 in 12 hours. Crazy.

Fortunately, it gets a little better later on in the following days, and if you’re not exactly Mr or Mrs Popular, you’ll find a day and a half is possible bordering on two days, though we’d charge nightly just in case.

That’s a little better than average, but again, mileage may vary, so if you expect to be receiving a ton of notifications, you may not make it through the day, so just be aware of this.

What we suspect is making this happen is a combination of factors, and they’re both good and bad.

For starters, there’s that screen, and while we’ve already heaped praise on the 400×400 screen — which is one of the nicest smartwatch displays on the market with a level of clarity few can match — it sure is showing a lot of pixels.

Powering more pixels is always worse for batteries, but so too is the omission of an ambient light sensor.

In case that term leaves you a little puzzled, an ambient light sensor is exactly what it sounds like: a small sensor that picks up on the amount of light in a room and tells the device to change the brightness of a display if less or more is needed. The more brightness you have, the more impact there is on a battery, and so ambient light sensors can help a great deal.

Unfortunately, they also tend to cut out a portion of the circle on a smartwatch, which is the reason why the Motorola 360 didn’t use a totally circular display, including that brightness sensor at the bottom of the screen.

Here on the Huawei Watch, you’re pretty much running with consistent power regardless of what the ambient light looks like where you are, which means if you had it turned up all the way earlier in the morning, it will stay that way until you turn it down again. You can do that, mind you, but few will.

If you do, you should see a bit more life, but the Huawei Watch also flicks itself on regularly, too, and the most basic of movements with your wrist or arm will light the smartwatch up, even if you’re only scratching your head.

Fortunately, you can switch it off quickly by covering the watch with your palm, and even turn off the “always-on screen” to help out.

Unfortunately, the screen — as good as it is, as great as it is — is basically useless in sunlight, so make sure to seek out shade or cover your watch with your hand if you need to view it in direct sunlight.

Unlike Samsung’s latest AMOLED displays, Huawei’s don’t quite have that excess power reserve that turns on the screen full blast, and while the Watch display is lovely, it’s no Note 5 or S6 Edge screen.

Our other quibble with this one is price, and it’s one of those values that makes us think you’re paying for the materials and design more than you are the technology.

We’re not going to mince words here, because under the hood, this is the same smartwatch Asus has made, and LG has made, and Sony has made, and even Samsung has made. This is the template that Google practically designed, and Huawei hasn’t really made it better or worse, merely following it from a spec point of view.

What you’re paying that $549 minimum price for appears to be the style, with a thick metal body and heft that oozes “watch” rather than “toy”. Even the strap feels like it’s made from a good quality metal, though it is a little annoying knowing you need to take it to a jeweler or locksmith to get mounted on your wrist (Huawei’s Watch does support standard straps, however, so if you have something that matches its 18mm size, you can install it).

It still feels a little too much, mind you, not just because it’s going up against the similarly priced entry level Apple Watch, but also because Huawei isn’t yet a common enough name for people to match that sense of quality to. Half the people in the office can’t even pronounce it properly (it’s “wah-way” in case you were curious).

If this were a hundred or so under the asking price of an Apple Watch, we could see this making more sense.

An iPhone owner might think “I want to invest in a smartwatch, and the circular design looks more like a watch, plus the cost is better”, and it would be no contest, but nearing the same price makes it a harder ask. Android owners necessarily have that same dilemma, and to them, this is just a very premium smartwatch.

But Apple owners definitely do, and while the entry-level Apple Watch’s materials don’t really hold a candle to what’s being offered here — aluminium casing and ion-strengthened glass on the Apple Watch vs stainless steel and sapphire crystal on the Huawei Watch — it’s still an angle and argument that would give us pause.

One of the nicer looking smartwatches out there, Huawei’s Watch is easily worth a look if you fancy a smartwatch but haven’t been impressed by the styles of devices you’ve seen thus far.

Truth be told, there isn’t a lot that separates what Huawei has done from the competition outside the screen quality and body design, but sometimes that’s all it takes.

Ultimately, if the idea of a clean yet thick smartwatch is appealing, you’ll like what Huawei has built.

Overall
Features
Value for money
Performance
Ease of Use
Design
Reader Rating0 Votes
Beautiful screen; One of the better looking smartwatches; Loads of faces; Works with both Android and iOS out of the box; Takes standard watch straps;
Battery can be hit and miss; No ambient light sensor; Useless in the sun; Expensive;
3.5