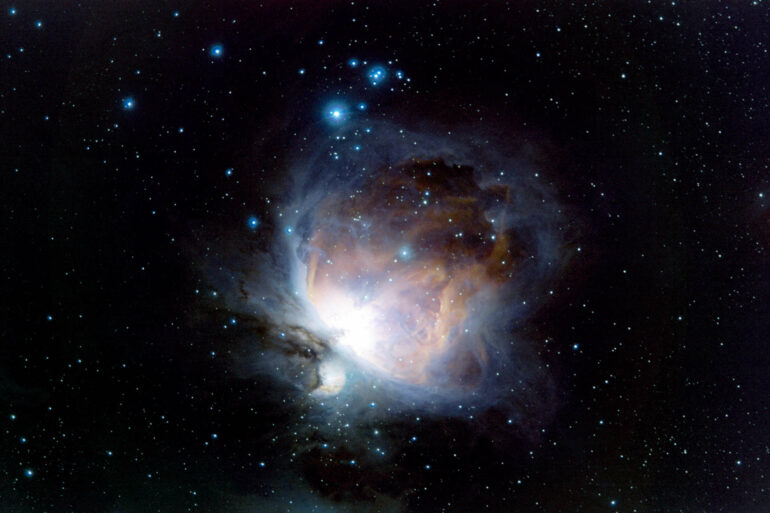 The Orion Nebula as captured by the Huntsman Telescope. Source: Sarah Caddy.

Macquarie University is about to learn more about the galaxies in the Southern Sky thanks to the Huntsman Telescope, a unique array of lenses that makes the telescope the only one of its kind in the Southern Hemisphere.

Housed at the Siding Spring Observatory near Coonabarabran in New South Wales – a seven-hour drive from Sydney – the Huntsman Telescope will help local researchers better understand how galaxies work via deep southern sky surveys. By studying ultra-faint galaxies and astronomical objects, researchers will aim to learn more about galaxy formation, growth, and how they interact with nearby structures – including other galaxies.

Inspired by the US-based Dragonfly Telephoto Array, the Huntsman Telescope uses an array of 10 Canon EF400mm f/2.8 L IS II super-telephoto lenses. Remarkably, it uses commercially available photography equipment you can buy off the shelf. Canon spruiked the lenses’ anti-reflection technology that uses a nano-fabricated coating with sub-wavelength structures on optical glass. One of the suggested benefits is that such an array differs from a regular mirror telescope, the latter of which can produce small errors due to imperfectly polished surfaces. Such errors can interfere with observing faint details surrounding galaxies.

One researcher excited about the Huntsman Telescope’s prospects is Macquarie University’s Dr Lee Spitler, who will serve as Hunstman Principal Investigator. The device might yield insight into a potential event 4.5 billion years into the future: a collision between the Milky Way and Andromeda galaxies.

“The Huntsman Telescope is pioneering the way in which we view our Southern skies by capturing images of the faintest galaxy structures that conventional telescopes simply couldn’t,” Dr Spitler said. “The ability to observe the remnants of galaxies colliding with each other and searching for the faintest and smallest galaxies in the universe, will help us understand the potential fate of the Milky Way in the far distant future.”

Members of the public keen to see the telescope in person will have the chance on October 1 to coincide with StarFest. For now, the device named after one of Australia’s most well-known spiders will start collecting data each clear night. More information about the Huntsman Telescope is available on the Macquarie University website.

After the awe-inspiring images from NASA’s James Webb Space Telescope earlier in the month, it’s exciting to see more space observation projects happening locally. In the meantime, there are plenty of impressive images to whet our collective astronomical appetite.