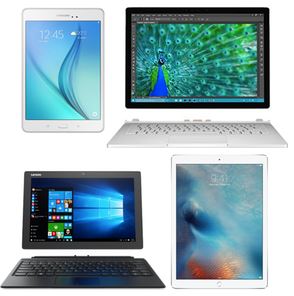 Before we get into the research, it is essential to define hybrid tablets and two-in-ones.

Hybrid Tablet:  A 7-inch or larger touch screen that does not require a keyboard or mouse but has a manufacturer made option. Telsyte includes Apple iPad Pro series, iPad Air 3rd gen (March 2019) and iPad 7th generation (released in September 2019), and tablets made by Microsoft, HP, Samsung, Lenovo and more with manufacturer made detachable keyboards.

Two-in-one: A foldable x360 style hinge (sometimes called five-in-one as they can be flat, tent, clamshell, tablet and studio) that provide a tablet-like experience, e.g. HP Spectre x360, or Lenovo Yoga 730. Some Chromebooks are also sneaking into this category.

Apple remained the leader in tablet sales share (iOS 53.4%, Windows 27.4%, Android 17.6%, and others: 1.6%). So, its iPadOS (basically a phone OS), Android (phone/tablet) and Windows tablets despite the price disparity between iPad and Surface (full-fat Windows) devices.

The top three tablet vendors during the period remained Apple, Samsung and Microsoft. Currently, there is around ten tablets and 2-in-1s with eSIM support from manufacturers such as Apple, HP, Lenovo, Microsoft and Samsung. Telsyte anticipates this will increase substantially over the next 24 months.

The x360 format is by far the most popular laptop format and accounts for much of the growth. HP now has x360 in its Pavilion, Envy, Spectre and Elite ranges. Similarly, Lenovo has 360° hinges across its whole range.

Price increases of 17% in H1 were driven by refresh to 9th generation Intel Core CPUs and the increasing prevalence of 4K screens.

The 2-in-1 category is expected to continue growing as manufacturers position their products as replacements for PCs and focus on the business and education sectors.

Telsyte found nearly 4 million (3.9M) Australians are now using a 2-in-1. While Windows still dominates Telsyte expects the share of 2-in-1 iPads to increase with the expanded range of new iPads which support Apple’s ‘Smart Keyboard’.

“The slate-only format is rapidly being replaced by 2-in-1s as Australians seek to replace older laptops and tablets with converged touchscreen devices with keyboards.”

The replacement period of slate-only tablets (non two-in-ones) has increased close to 20% cent in the last 12 months to 3.2 years, compared to 2.6 years for 2-in-1s, according to Telsyte’s research.

In the portable ‘PC’ world, you have Windows and macOS which are full-fat OS. These should be compared Apples-for-Apples regardless of whether they are a hybrid tablet or two-in-ones or a clamshell laptop or another format. Her you would see the typical 90/10 Windows/Mac market share.

In the tablet world, you can compare iPadOS with Android. No wonder Apple leads here because iPads are cheaper than Surface Pro. Here you would see a dominance of Apple’s excellent iPad, but the Android market share would be mathematically higher.

What the research tells me is that portability and connectivity are the next big things and manufacturers can charge more for NBTs.

And lets see what Windows on ARM brings – it could be a game changer.