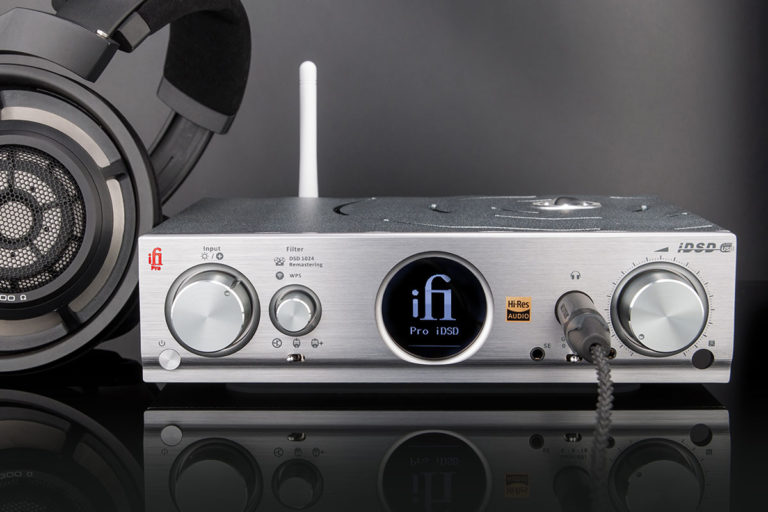 Sometimes we here at gadgetguy.com.au like to immerse ourselves in audio luxury. Which is why I’m reviewing the iFi Pro iDSD. An audio device of pretty much limitless capabilities.

The iFi Pro iDSD has three main functions. It is:

As a DAC, it supports pretty much known digital audio format. Specifically, it supports PCM at up to 32 bits and 768kHz sampling. I haven’t been able to find music yet at more than 384kHz sampling, and they’re all demo tracks. See what I mean about covering the future?

It also supports DSD – Direct Stream Digital, the format which was first used in Sony’s Super Audio CD. The iFi Pro iDSD handles not just regular DSD64. Nor just double-speed DSD128, quad-speed DSD256, nor octa-speed DSD512. No, it goes all the way up to 16x DSD1024. Again, the highest spec test tracks I’ve got are DSD256.

Furthermore, the iFi Pro iDSD supports MQA. That’s a special format recently developed by Meridian in the UK – it also invented the fundamental lossless compression techniques used in Dolby TrueHD audio. MQA can do two things. First, it can allow higher resolution PCM audio to be packed into a stream no bigger than that used by standard resolution. Second, it carries digital “flags” which can show that the audio has been “authenticated” as original studio quality by the producers. There’s not much of this around, except on the TIDAL streaming service.

There are inputs for a USB 2.0/3.0 connection to a computer (Windows or Mac). This is what you’ll use for your 16x DSD files! But you can also plug in a USB memory stick or hard disk and play back content from that. Or a microSD card. Or plug in an external digital source via either coaxial or optical connection. Finally, you can feed in professional-grade AES-EBU digital audio via an XLR connector. There is also a BNC socket which allows the decoding to be clocked by an external source, something of importance in some studio contexts. You can even switch to various types of clock sources. Those last few things simply won’t be used by consumers.

A front panel display shows the signal format, sampling, input selected and processing. By “processing”, I mean you get a choice of four different filter types, or the option to convert the signal internally to DSD512 or DSD1024 before decoding.

There’s an Ethernet connections as well – the unit is after all a network streamer. But included with the iFi Pro iDSD is a Wi-Fi adaptor which can be plugged into a dedicated USB socket. The iFi Pro iDSD acts as a DLNA renderer and a network speaker for such things as Apple Airplay and Spotify Connect. The recommended app also includes support for iHeartRadio, TIDAL, Napster and Qobuz.

That brings us to the headphone amplifier built into the iFi Pro iDSD. This has five outputs, three of them for headphones. One is 6.35mm – the good old-fashioned quarter inch socket, one is 3.5mm and one is 2.5mm balanced. There’s also a version of the iFi Pro iDSD with a 4.4mm balanced headphone output instead of the 2.5mm socket. This costs $300 more. At the back are RCA and balanced XLR line outputs. A switch next to those allows you to select variable output level or fixed (maximum) output level for both, at home audio or (higher) pro audio levels.

You can use the headphone amplifier in three modes (there’s a switch on the front): with Class A JFET solid state output, with Class A output using GE5670 valves, and with the valves but with reduced negative feedback.

Setting up the iFi Pro iDSD

With such extraordinary capabilities, you’d expect to see an impressive manual. But the manual was weirdly uninformative. For example, the unit uses a combined socket for digital audio. There’s a standard RCA socket for coaxial digital audio, but the optical socket is the hole in the middle of the RCA socket. I’ve been doing this stuff for a long time and never before have I seen this arrangement. Yet the manual doesn’t mention it.

Nor does it tell you how to install drivers on your Windows computer, nor how to set up Wi-Fi. (It isn’t all that hard. The Wi-Fi connection offers itself as an access point. You connect your phone to it and key “10.10.10.254” into a browser and then used that page to connect to your network.) There’s also a WPS button if you prefer to connect that way.

The front panel display of the iFi Pro iDSD was excellent, showing exactly what was happening with the signal. If you make a mistake in setting up your player software on a computer, you’ll soon become aware of it.

I was able to test the unit with PCM signals up to 384kHz sampling, and DSD up to DSD256. All of these worked perfectly when fed from my computer. Foobar2000 didn’t seem to want to work with DSD so I switched over to the much-easier-to-configure JRiver Media Center. It fed through those signals bit perfect … with the right settings. I complained about the weaknesses in the manual, but the iFi website does have several very useful documents for setting up various versions of Foobar 2000 and JRiver to properly stream DSD.

I used the RCA line outputs for listening through my system, with output set to “Pro Fixed”, plus the headphone outputs. So, why “Pro (Fixed)”? Aren’t I a hifi guy?

Well, I did listen for a while with “HiFi (Fixed)” and, in fact, the sound was rather harsh. That surprised me. The reason seemed to be that it was, well, too loud, perhaps overloading the line input a bit.

Using the RCA outputs, the output voltage of a 1kHz sine wave, modulated to peak at full scale, was 4.98 volts RMS with the output control set to “HiFi (Fixed)” and 2.24 volts RMS with it set to “Pro (Fixed)”. The two variable settings matched the respective fixed settings when the level knob was turned completely to the right.

Listening to the iFi Pro iDSD

And with that setting, the sound produced by this unit was first class. It was authoritative, controlled and detailed. In a word, unimpeachable.

That continued when I switched over to headphones. Inserting a headphone plug into one of the front sockets switches off the line outputs.

I had headphone models to hand ranging from 16 ohms to more than 500 ohms impedance. Some had smooth impedances across their operating range, while others had wide variances. All of them sounded as good as I have ever heard them, and several of them sounded far better than with a lot of other equipment. I’ve written previously about certain design weaknesses in headphone outputs. This unit appeared to exhibit precisely none of them.

So it, too, was authoritative, controlled and detailed into all different headphone models. And it was powerful. It easily drove all of them to the maximum of their ability, and my ears, to cope. And well beyond, it turned out when I later conducted some measurements. Using the valve amplifier produced a slightly higher output and, to my ears, a very slightly warmer bass. That was especially the case with the reduced feedback mode. I expect it was very slightly less accurate than the solid state or normal valve mode, but by golly it made for a lovely, full and rounded experience.

You can stream music to the iFi Pro iDSD – once it’s connected – in several different ways. That can be from DLNA sources, from certain Internet providers and from iOS devices using Apple Airplay.

Airplay worked as it ought to, with the iFi Pro iDSD appearing in the list of available speakers and playing back the music perfectly. Like, Airplay, the Spotify app on my phone brought up the unit as a Spotify Connect speaker.

With DLNA I used an app on my phone to send music from my server to the iFi Pro iDSD. It worked fine to 96kHz but there was a lot of breakup with 192kHz files. (I couldn’t get the app to send DSD without conversion.) When I’d set up the Wi-Fi, I’d noticed that the options only showed the access points running in the 2.4GHz band, not the 5GHz band. I guessed that there was insufficient bandwidth available in my office, so I plugged in the Ethernet cable. Thereupon nothing worked. My apps could no longer see the device. I went back into the web interface and found the ‘Restore Factory Settings’ function. Using that I wiped the Wi-Fi connection. Then 192kHz worked well. But 384kHz sampled stuff didn’t come through at all, nor did it trigger the display readout. I’m guessing that the unit doesn’t support stuff that high over the network.

Finally, I plugged in my standard USB memory stick to see if I could play back its contents. For that I had to use the Muzo Player app – iFi recommends you use that as the main player. The Muzo app provides access to additional inputs on the unit such as USB. It brought up a list of music files and almost all of them played – MP3, Apple Lossless, AAC and FLAC. It did not see the DSD test track, and I suspect the app is doing some conversion since the 96kHz ALAC test tracks was reported as 44.1kHz. In all cases, the unit’s front display showed PCM, not MP3 or whatever.

I measured the output impedance of the 6.35mm headphone socket at around 2.9 ohms with both the solid state and valve output amplifiers. The unit would not clip into my test loads, even with the highest gain setting and the volume pushed up to the maximum. The output was a little hotter with the valve amp, running easily above 80mW into a 295-ohm load, and well over 1,000mW into a 16-ohm load. That means that the unit would push high-ish impedance headphones to something like 120dB, and low impedance headphones to perhaps 130dB. See what I mean about plenty of power?

Neither was the transistor amp a slouch. It produced respectively nearly 60mW and around 820mW. They’re both only about one decibel lower in level.

The iFi Pro iDSD has selectable filters for the DAC. The frequency response depended very much on which filter one used. Let me cut to the chase: do not use either the Bit Perfect or the Bit Perfect + filter. The first is so bit perfect that it entirely skips the output filter. 1kHz sine waves sampled at 44.1kHz present with a clear step pattern, while the response rolls off early. No filter means lots of harmonics, and they start to overpower the original signal at high frequencies.

The Bit Perfect + filter is like Bit Perfect, except that it boosts the high frequencies to counteract the natural roll-off. It produces even more harmonics. The 1kHz sine wave is very weird. Fortunately, that stuff is probably not audible. Still, use one of the other filters.

The noise performance from the line outputs was inaudibly low with 24-bit signals, scoring a -108.4dBA from the balanced outputs when the DSD conversion was avoided, and -102.1dBA from the RCAs. Not class leading, but again utterly quiet in practice.

The iFi Pro iDSD is an extraordinary unit. It covers digital signals that are verging on inconceivable, and covers computer, USB, hifi-component and streaming requirements. Plus, it has a superb headphone stage. Yet it’s verging on affordable for the real enthusiast.

You can purchase the iFi Pro iDSD from the Australian distributor’s retail outlet here.