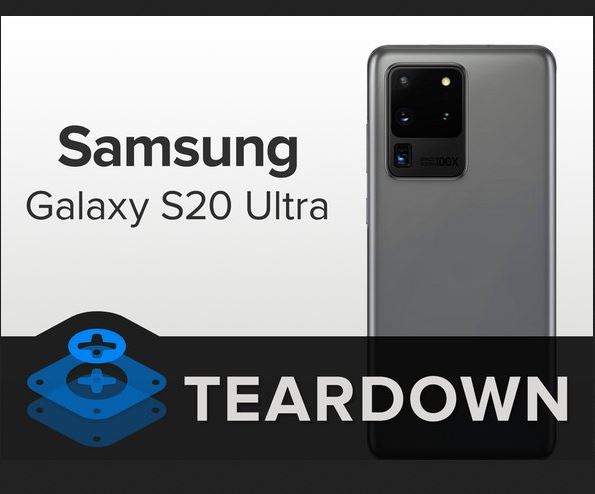 And that is precisely what I wanted to see evidence of in the Samsung Galaxy S20 Ultra teardown – the kitchen sink and all.

The Samsung Galaxy S20 Ultra teardown reveals (in their words) “A crazy huge main camera sensor nearly twice the size of the iPhone 11 Pro Max, and a strange, sliding, focal-length-mastering periscope zoom camera. And a couple of spare sensors, as a treat.”

Tech heads can and should read the full teardown here but following are the salient points. Note that this is for the US model that uses the Qualcomm 865 and X55 modem, but apart from that, it should be the same.

The camera module occupies almost half the top section of the phone and as drop tests have shown its virtually impervious to accidental drops (pity about the Gorilla Glass back though). Use the supplied clear plastic bumper case!

The 108MP sensor is over twice the physical size of the iPhone 11 Pro, but as most men say, it is not the size that counts, it is what you do with it. In any case, the Samsung bins down to 12MP, so its equivalent to the iPhone’s finished shot.

Then there is the 48MP periscope lens/sensor with OIS to give up to 100x Hybrid ‘Space Zoom’. OPPO perfected this tech but only called it 10x lossless – well Samsung’s marketing department perhaps are employing a few ex-Huawei PR staff?.

It confirms that the RAM is LPDDR5x and 128GB storage is the new UFS 3.0 standard – both the fastest (and most expensive) there is. Geekbench 5 confirms it is the fastest Google Android smartphone on the planet, and Samsung’s extra investment pays dividends here.

It follows a Qualcomm reference design using its SoC, modem, RF, antenna modules and more. We get the Exynos version here, and our tests show it is marginally faster than the SD865, but its Wi-Fi AX and 4G/LTE and 5G sub-6Ghz reception is slightly slower than a Note10+ 4G unit.

Looking at the teardown, we surmise that the antenna system is 5G optimised at the small expense of 4G sensitivity.

3/10 is suitable for most smartphones, and it loses a point for using separate modules that prevent individual replacements.

GadgetGuy’s take – the Samsung Galaxy S20 Ultra teardown confirms it is the most potent and fully-featured Google Android smartphone on the planet.

As we were reviewing it, we could not help but marvel at the design and features – it has everything, but the teardown did not find a kitchen sink – only a massively efficient vapour chamber heat sink!

But as we used it, we could not help feeling that a $2000/2300 smartphone in your pocket is excess at best – a flashy and blatant show of wealth or that you can get it as a tax deduction.

Not to take away from the S20 Ultra 5G – if you have the dough buy it because there is no better.