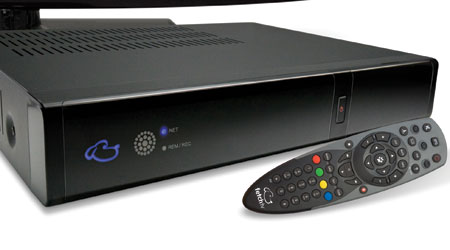 FetchTV is a newcomer to the personal digital video recorder (PVR) category, competing with big-name living-room moguls like Foxtel’s IQ2, TiVo and Telstra’s T-Box to name a few.

Like the other PVRs, FetchTV enables you to tune in free-to-air digital TV and pause, rewind and record live broadcasts. Also similar is a selection of video-on-demand movies and TV shows, which can be purchased and downloaded from the Internet.

However, what makes the FetchTV stand apart is that it also offers ‘IPTV,’ which is additional TV ‘channels’ that are ‘broadcast’ through a broadband connection instead of over the airwaves or through a Pay TV cable or satellite.

This is an advantage for those who want more than just free-to-air TV, but don’t live in an area where they can get Foxtel, or for people who are looking for a cheaper alternative.

FetchTV is distributed through partnerships with Internet Service Providers, and the first company to sell it in Australia is iiNet, with others expected to follow. Downloads from the FetchTV service don’t count towards your monthly iiNet quota, meaning you can watch as much as you  like without incurring extra broadband usage costs.

FetchTV is designed to connect to your standard or high definition television, either directly or via an AV receiver. It comes with a number of connection options including HDMI, component and composite video, S-Video and analog stereo audio. For 5.1 surround sound systems, digital optical and coaxial connections are also included.

FetchTV tops the pack when it comes to on-board storage, with a massive 1 terabyte included as standard. There are also three, rather than two, HD digital TV tuners built-in, which means you can watch one channel while recording on two others.

FetchTV is more than just a HDTV tuner that sits in your entertainment console. Think of it as an international content aggregator. The service combines the 16 or so digital free-to-air TV channels with content purchased from international broadcast networks, and delivered via 15 IPTV channels, as well as pay-per-view movies and TV. Web-based content is provided in standard definition quality.

Fetch also provides a rolling list of 30 video on-demand movies, which is included in the subscription price. There’s a new movie added each day, and while many are classic catalogue titles or niche films, this gives you a wide range of viewing choice. For new release movies, there are plenty of options as well, plus you don’t’ have to hike to the video store. New release movie rentals cost $6.95.

A unique feature of FetchTV is that it will download all of the on-demand movies and TV shows to a dedicated space on the hard drive. It does this ‘in the background’, or while the machine is inactive, and it takes about a month to complete. The advantage of doing this is that you won’t have to wait for your movie or TV selection to download before watching, as it’s already resident on your machine.

A downside is that all this content takes up hard drive space that you could normally use for free-to-air TV recordings, but considering that you have 1 terabyte to start with, there should still be plenty of space.

The electronic program guide (EPG) is where you can browse the different channels, and Fetch has combined both the IPTV and terrestrial channels into one seamless interface. It’s straightforward and easy to use, as are most of the menus and remote control. However, the lag when populating the EPG with information is frustrating. Also, changing free-to-air channels takes a maddening couple of seconds, much slower than competitor alternatives, and takes some getting used to.

I was impressed with the quality of the Fetch IPTV channels (available only via FetchTV2 serive – see opposite). For the most part, the TV programs looked like regular television, although some National Geographic shows needed to be scaled to fit the entire screen, despite the FetchTV being set to 16:9. Overall, switching between IPTV channels was seamless (and faster than free-to-air) and I didn’t experience any excessive pixilation or frame stuttering.

Setting up the Fetch unit does require that you have an iiNet Bob wireless router/modem installed, and iiNet also requires that you use a wired, rather than wireless, network connection. If you don’t have an Ethernet cable that runs to your living room, iiNet provides an Internet over Powerline solution, which installed in seconds and worked without a hitch. Apart from a few teething issues that needed a support call to rectify, such as a missing PIN code and iiNet forgetting to switch the IPTV channels on, the FetchTV unit has worked flawlessly since.

While there are a few games and social networking applications included, these are nothing noteworthy. Most, especially Twitter and Facebook, are difficult to use via the remote control, and it would be magnificent if Twitter’s tweets would appear while watching TV – but they don’t.

iiNet offers two different pricing packages. There’s FetchTV1, which is a slimmed down service available to all customers. For $14.95 per month (including rental of the FetchTV box and content subscription and no setup fee), customers get the box, pay-per-view movies, games and social network apps, but not the 30 on-demand movies or 15 IPTV channels.

For the complete package, called FetchTV2, iiNet broadband customers pay $29.95 per month, or $19.95 if they buy the box outright. And if you do this, there’s no contract period, while there is a 24-month period if you rent the box. Keep in mind that the costs for FetchTV2 are in addition to your iiNet broadband rental (minimum speed of 4.5Mbps), and a Bob Internet gateway/modem.

Overall, FetchTV – or something like it – is where the future of living-room content is headed. By combining the best of free-to-air television with internationally sourced quality Internet content, along with a seamless electronic program guide, the experience really is impressive. Also, iiNet uses a QOS (Quality of Service) technology to ensure that the FetchTV IPTV channels receive priority over other devices in your home that are also using the Internet, so the picture quality should remain consistent.

If you don’t mind paying a subscription fee for your content, but don’t want, or can’t get Foxtel, then FetchTV is a very attractive alternative. Telstra’s T-Box will soon receive Foxtel IPTV channels of its own, but until then, FetchTV is the only game in town. Beyond that, innovations such as background downloading and 30 free movies per month to FetchTV2 subscribers, give the FetchTV2 service a unique and compelling point of difference, and throw down the challenge to other operators in the space.