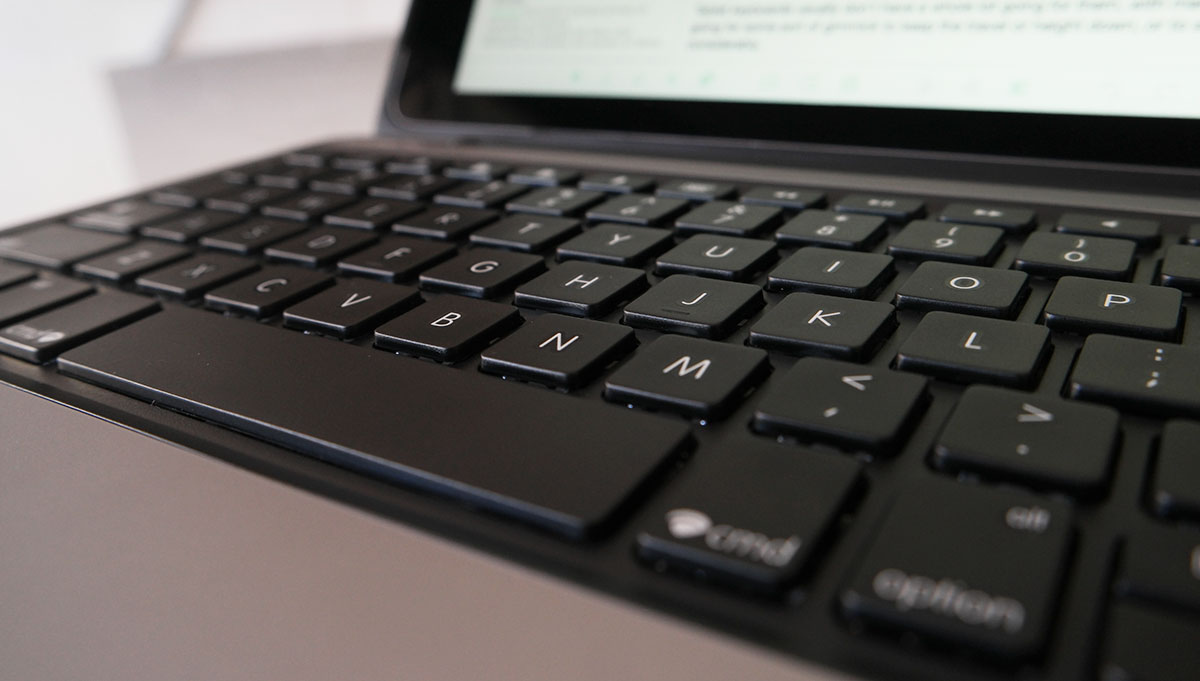 The iPad Air 2 is already a great tablet, but what if you want to join that “post-PC” world and ditch the laptop altogether? Incipio’s ClamCase Pro could be the ideal addition, bridging the gap with one of the best keyboard cases we’ve ever seen.

Apple may have hinted at a “post-PC” world in several speeches, but this area is harder to get to than most people would like.

While tablets are improving in leaps and bounds, changing from just being mere internet use and content consumption devices to gadgets that could theoretically replace most of what you use a fully-fledged computer for, sometimes a tablet needs a bit of help to see it make that jump from “mere tablet” to “post-PC”.

One of these gadgets is the keyboard case, something that isn’t new, and has for the years it has been around found its place due to the need for typing on a display that could touches from an on-screen keyboard, but was never quite as good as the actual typing experience.

And we’ve seen keyboards from lots of manufacturers, including the expected players like Belkin and Logitech, and even one made by Apple for its iPad Pro, but now it’s time to check out something from Incipio, which the accessory and bag maker bought from ClamCase, a keyboard case specialist.

The product in question is the ClamCase Pro, and as you can probably expect, it’s a keyboard case designed like so many to turn your iPad Air into a computer replacement.

Materials in this case are a cross between ho-hum and high-grade, with the middle section surrounding the keyboard made from a very Apple-inspired aluminium, while the rest of the body is polycarbonate, which you can just interpret as nice plastic.

We’ll get to the keyboard in a moment, but what needs to be acknowledged before we touch on that area (excuse the pun) is the hinge.

You see in the ClamCase Pro, Incipio and the company that built the ClamCase Pro to begin with — ClamCase — have come together for something that is a little more useful than just a keyboard case, with a hinge the likes of which will remind you of a hybrid tablet.

Now there are plenty of these around the place, with companies including Asus, HP, and so many others touting 360 degree hinges that let a laptop become a tablet simply by shifting the touchscreen all the way around to the back of the notebook, pressing the back of that screen up against the back of the laptop.

That seems to be the new way companies make tablets, and is the more likely situation any computer with the number “360” in its name is going to provide.

But the iPad Air 2 is already a tablet, and so in the case of the ClamCase Pro (again, excuse the pun), this is about allowing the tablet to function as a tablet if need be without forcing you to take the iPad out of its casing.

For this to work, you’ll find the hinge is another of those 360 degree variants, allowing the screen to be held at 90 degrees like another laptop, pushed back in some tight angles, laying flat, and then pushed even further back.

Once you go past a certain point, the keyboard will actually switch off, and this is intentional.

When this happens, your keyboard is no more than another part of the case, allowing it to be a stand or a very bumpy back of a case.

This means you can use the tablet as a tablet, even though it will now weigh a fair bit more, and closer to the kilogram mark, with the case and keyboard making up the rest of that.

It also means you can use the iPad Air 2 in a stand ideal for watching movies, with the hybrid form-factors new PCs tend to receive being applied to this case.

In essence, the ClamCase Pro and its 360 degree hinge brings hybrid PC form-factors to a tablet that is already tried, tested, true, and trusted.

But there’s more, because this is a keyboard case after all, and chance are you wouldn’t be considering this if you didn’t, you know, want a keyboard to type on your iPad Air 2.

The thing about the iPad Air 2 is that it has such an excellent screen with fast finger pickup — something Apple intentionally improved on the Air 2, actually — that even speedy typists can use the screen without any problems.

If, however, you want home-row keys or you’re still faster with an actual physical keyboard, we totally understand, and that’s precisely what Incipio’s ClamCase Pro provides, offering a solid click and more travel than you might expect, which lends itself well to the iPad Air 2, turning the entire thing into a great typing experience.

This review was typed on one, and even a few others, and if you’ve longed for a compact note taker or tiny computer, and you’re already super reliant on the iPad in your life, the ClamCase Pro makes a lot of sense.

Yes, the keys are a little smaller than they should be, and the row of unnecessary shortcut buttons for search, copy, paste, Siri, and music control are unnecessary, but they don’t impact the typing experience considerably, and overall, the travel and click found in the ClamCase Pro is better than the majority of keyboards we’ve seen in the past.

In fact, we didn’t find it long to adapt to this keyboard, simply because the typing experience was so good on the accessory, effectively turning the iPad into a not-quite-MacBook.

We’re not so sure why Incipio has opted to include a “Fn” function key, that said, because there are certainly no function keys on the keyboard itself, making this very confusing, or more something left over from a design that Incipio forgot to ditch. If this key wasn’t here, we suspect the Apple staples of control, option, and cmd (command) could have been spaced out a little more, or even led to a longer space or a change in another location.

Still, you don’t have to lean hard on the bottom left, so it’s not a huge issue, and just in case, there’s a command and option button on the right side, as well.

What we do wish the ClamCase Pro had was a more substantial bottom section, because while the combination of aluminium and plastic isn’t bad — aluminium in the middle section, plastic on the bottom of the casing, and in the lid — the 437 gram weight of the iPad Air 2 is still heavier than the top section, since the entire ClamCase Pro weighs in at 544 grams.

This means you don’t get a lot of stabilisation or anchoring from the keyboard section of the ClamCase, and so while the screen will stay at the angle it needs to when set to 90 degrees, the moment you push the screen back a little further on its hinge, it starts to lurch backwards to the point where it may as well just play dead, and if the ClamCase is on the edge of one’s knees, that description may well be apt.

Rest your wrists on the keyboard and the wrist pad, though, and you’ll never even notice it as your limbs will be pinning it down, stopping it from ever falling backwards to begin with, making it more of a minor issue.

We take pride judging keyboards, and given that we write every review on a machine where there’s a keyboard that we can do that on, tend to spend a fair amount of time with the keyboards in question.

Tablet keyboards usually don’t have a whole lot going for them, with manufacturers often going for some sort of gimmick to keep the travel or height down, or to slim the design considerably.

In Incipio’s ClamCase Pro, however, what we’re seeing is a design that has been focused on engineering not just a decent case, but a brilliant keyboard across the board, with a solid click, great travel, and a lovely feel that rivals even Apple’s own laptop keyboards.

That’s an impressive feat for a case manufacturer, and it’s even more impressive for us to point out that we’d be happy writing more reviews on the ClamCase Pro, so much that we event spent the time writing another 2000 word review because this was so comfortable.

If that doesn’t tell you how much we love what Incipio has in this case, we’re not really sure what will. Seriously, this is one of the best keyboard cases around. Highly recommended.

Overall
Features
Value for money
Performance
Ease of Use
Reader Rating0 Votes
Decent amount of travel; Keyboard switches off when it folds back around the case; When keyboard is switched on, it doesn't switch off when the screen is pushed back too far, only going off when the screen is flat (180 degrees and further);
Weight of the iPad Air 2 and its plastic case holder means the case will almost always lurch backwards unless held down with wrists; Some of the key placements on the bottom can feel a little odd;
4.5