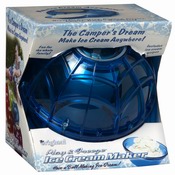 The Play and Freeze Ice Cream Maker is a hard ball made of durable polycarbonate that allows people of all ages to participate in the ice-cream-making process by shaking and rolling the ball itself.

This product is described as a product that allows you to make ice cream anywhere. The company that makes the product, Industrial Revolution, states that users ‘don’t need electricity’ – you simply add ice and rock salt in one end and ice cream mix in the other, have ball: shake it, pass it or roll it and in minutes it makes about 600 ml of ice cream. It could make a fun addition to a camping trip, a party or a boating trip.

If you are planning to make ice cream while you are out and about with the kids, or camping perhaps, keep in mind that you ‘don’t need electricity’ applies only to the process required to combine your ice cream mixture. It’s best to stock up on a decent sized bag of ice before you get started (a 5 kg bag would be plenty). You will also need a minimum of about 1 kg of rock salt, several containers of cream plus vanilla essence and sugar: all you’ll need to make vanilla ice cream. It can get pretty messy making ice cream, too, so I’d recommend having some tea towels and a damp cloth handy.

The Play and Freeze Ice Cream Maker has two openings: an end that must be filled with ice and an end for placing the ice cream ingredients. It also comes with a plastic wrench, for tightening the unit before you roll, throw or shake it.

Starting with the end that is designed to house ice the first step is to remove the lid and place as many ice cubes inside the ball as you can, followed by about half a cup of rock salt. The next step is to replace the cap on the ice end securely with the supplied plastic wrench and rotate the ball until you have the ice cream end at the top.

Here is where the fun starts. To mix the ingredients, and ensure the ice cream is wonderfully light and fluffy, shake it, roll it and pass the ball. Don’t drop or kick it, however, as this could potentially damage the unit and it’s not covered in the warranty, either.

After 10 minutes, open the ice end, empty the excess water and refill the rock salt. Next, open the end containing the ice cream mix and you will notice that about a couple of centimetres of ice cream is building around the edge of the canister. The next step is to scrape the mixture with a large plastic or wooden spoon into the centre.

This is followed with a further 5-10 minutes or throwing, rolling or shaking. That is how simple it is!

Making ice cream with the Play and Freeze Ice Cream Maker was as simple as following the method I’ve described above. The only challenging part of the process was removing the ice cream from inside the freezing canister with a plastic scoop: this proved to be tough work, as about half a centimetre of ice cream was challenging to remove from around the canister. And it was disappointing to only get about a pint of fresh ice cream at the end of the 20 minute mixing process, too. However, the manufacturer also makes a ‘mega’ version of this product, which would be a more practical size for families – or ice cream lovers!

The Play and Freeze Ice Cream Maker is a fun way to get the kids involved with making fresh ice cream and creates an entertaining way for kids to work up a sweat before getting their teeth stuck into a sweet treat.

Overall
Value for money
Ease of Use
Design
Reader Rating0 Votes
Fun ball-shaped design, easy to make ice cream in around 20 minutes
Very cold to touch when shaking, dropping or kicking is not allowed
3