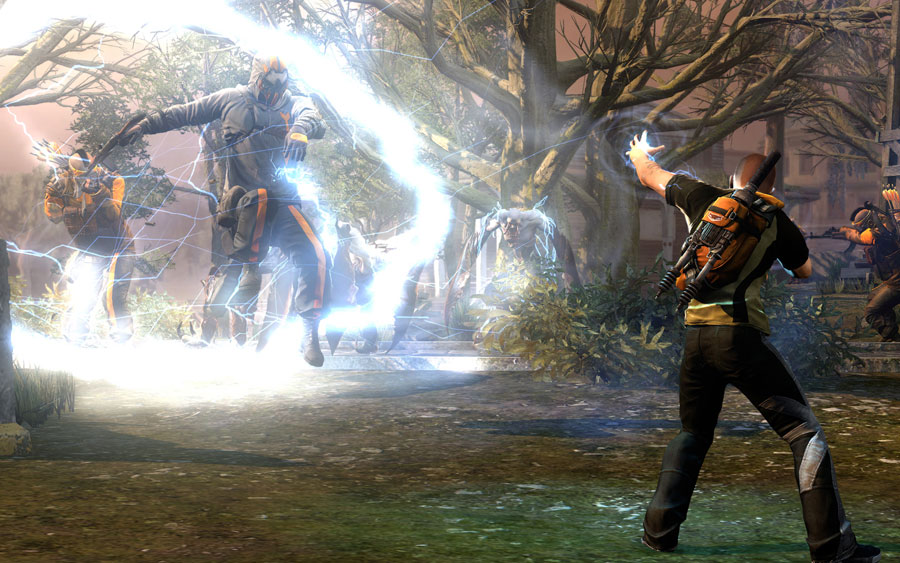 One of the best ‘superhero’ games on any console but not starring any of the more conventional superhero characters that Marvel or DC fans would be familiar with, Infamous 2 is the sequel to a game that makes you feel as powerful as a god, gives you free rein in a huge city to go where you want and do what you will, and features likeable, memorable characters for some fun interaction.

Just as with the first game, you clamber, glide, slide and zip all over the cityscape while wielding immense power. You’re like Spiderman without the teenage angst, like the Hulk without the ugly skin and uncontrollable temper, like Iron Man without the ego.

Continuing the storyline from the first game, your character, Cole, has become somewhat of a pariah and is initially spurned by the citizens he mixes with. What happens next is largely up to you, and very much the genius of this game. You can be a good guy, following ‘good’ mission types, marked in blue on your in-game map, or you can be a bad guy, following the red missions. At certain points during the narrative, too, you’re presented with a decision to make, usually being forced to choose between a good or evil option.

What’s special about Infamous 2 though – special in a good way – is that these decisions have significant and meaningful consequences for you in the game – deciding whether to come to the medical aid of downed citizens or fry their brains and gain power is one thing, but at one point we were asked to choose between two of the hottest videogame chicks ever, one ‘good’, one ‘evil’ (or, as we prefer to view it, mischievous) and, honest to god, it took about 15 minutes of agonizing before we could make a decision!

Choose the cheeky girl and your path switches to ‘evil’ (if you’ve been good up to that point), accompanied with red fireworks as you exercise your powers and the option to acquire a heap of really cool powers.  All the abilities are upgradeable, both in style and force, so even though you start the game more powerful, say, than the bodybuilder armed with an Uzi, you get increasingly more powerful as the game marches on. And it feels sooooo good!

Being presented with significant decisions with actual consequences is rare enough in a videogame, but Infamous goes and builds on this excellence with great voicework, a strong, sometimes laugh-out-loud script, detailed level design and some challenging enemies. Besides the obvious ‘enemy-soldier’ type, and there are various kinds of those, the city is plagued by some pretty interesting, and large, monsters that take some killing.

Fortunately, your maneuverability through the city is aided by new features like electrified ‘zip poles’, for want of a better description, which give you  a boost up the sides of tall buildings, and the ability to surf the overhead tram cables, providing quick escape route options if you need to take a quick breather before rejoining the battle.

Developer Sucker Punch has improved upon the already excellent first game and has, yet again, given Xbox 360 owners something to complain bitterly about, because Infamous 2 is exclusive to the PlayStation 3 system.