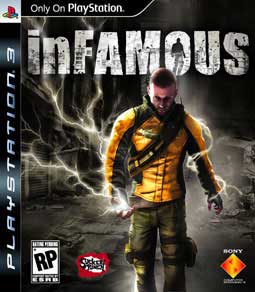 inFamous is an action adventure game starring a man who has suddenly acquired an ability to collect and channel electricity, to all intents and purposes making it a superhero game. It starts with a quite literally brilliant opening to the game that is cinematic without being dictatorial, allowing you to move around and play while events unfold around you, also serving as a rather neat controls tutorial. And that’s the first glimpse of a heap of very clever design decisions that ultimately makes inFamous a superbly entertaining experience.

Character movement is superb – you’re like a rookie Spiderman clambering up and over buildings, with more powerful moves such as a Hulk-like pavement-pounding jump. It combines all the best elements of ‘Crackdown’ and superhero games along with other deft touches, including being able to switch striking arms (excellent when attacking from cover). The attacks themselves may just be analogues for a more traditional weapon set, but they look good, feel good and support a reasonably novel premise expounded in the narrative. They’re upgradable too, dependent on your actions, and very satisfying to use, particularly when strung together.

There’s some great design in the game – telling essential story elements via the TVs or Jumbotron screens scattered around the city is very neat, complemented by some excellent artwork stills and voicework. The levels themselves are also extremely well thought out, with an attention to detail that almost always escapes this kind of ‘open-world’ game and becomes all the more frustrating as a result. In inFamous, however, developer Sucker Punch has done a fantastic job of thinking through the character’s movements and making sure you’re never stuck or treated unfairly. A good example of this comes in the sewer sections, where a fair degree of platform jumping is required, with a fall in the water spelling instant doom. But even if you miss one of the platforms, you can sidle around it and discover a ladder that’ll take you back up to the top of the platform so you can try the jump again. That’s smart, thoughtful design and helps put inFamous head and shoulders above the competition.

There’s a clever ‘karma’ mechanic at work here, too. Early on in the game your character is presented with a dilemma and it’s up to you to choose to take the good or the evil path. Not only does the scenario then play out differently along the lines of your decision but you accumulate karma points, which gradually accumulate and determine if your character is good or evil overall. If good, your electric attacks are coloured blue; if evil, red, and even the appearance of your character changes accordingly. Some of the decisions are interesting, or plain entertaining, adding another fun dimension to the game.

Add in a host of subtle touches, including excellent, almost incidental ‘hallucination’ sequences that put the likes of ‘F.E.A.R.’ to shame and you have one of the most diverting releases so far this year. The fact that it’s exclusive on PlayStation 3 is more a tragedy for Xbox 360 owners than a triumph for Sony but if you have the powerhouse console in your home, inFamous is a must buy.