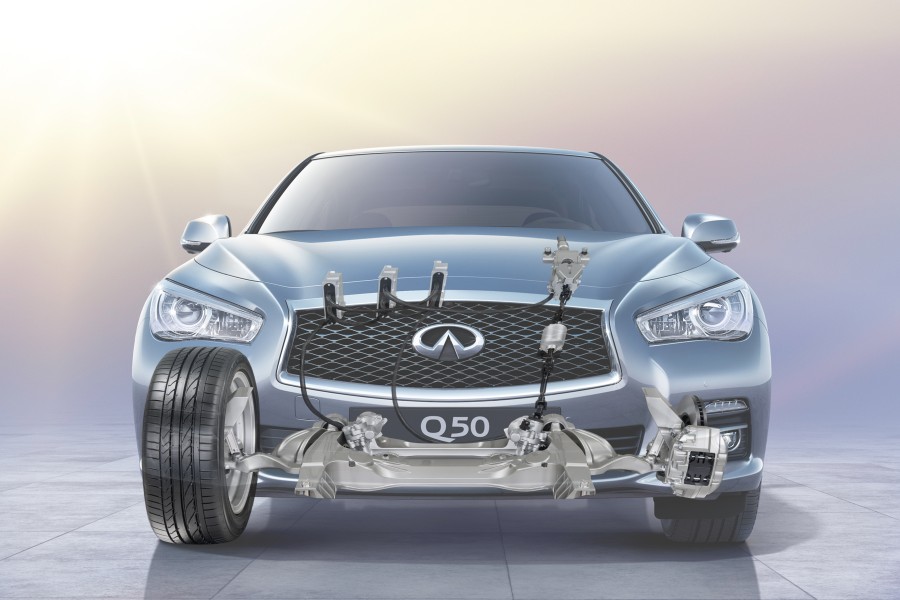 A fresh model from a relatively new brand in Australia, the Infiniti Q50 is set to challenge the establishment, namely the BMW 3 series, Mercedes C-Class, Lexus IS and Audi A4.

And to help, Infiniti has equipped the Q50 with some innovative world-first technologies, including a clever steer-by-wire system, along with a host of safety and driver aids.

On a recent driver experience in Melbourne, we got behind the wheel to try it out, and, more importantly, take a closer look at the technology on-board.

For those who don’t know Infiniti, the car company launched in 1989, and essentially serves as the luxury platform for Nissan, similar to how Lexus is Toyota’s luxury brand. Infiniti has been in Australia since September 2012 and has dealers in Sydney, Melbourne and Brisbane, with more cities due to open this year.

There’s little doubt that the 4 door luxury sedan segment is very competitive, so the Q50 really does need to set itself apart.

And it does – this is apparent in terms of its muscular and stylish outward appearance, but there’s even more to be found on the inside.

On the Engine front, variants range from a 2.2 litre diesel 4 cylinder, with a petrol 4 version on the way.

However, it’s the Hybrid model that really shines, because unlike most Hybrids, this one is actually quick – very quick in fact.

Thanks to the 3.5 litre 268kW V6, mated to a 50Kw electric motor, the Hybrid Q50 hits zero to 100km/h in just 5.1 seconds. And there’s plenty of in-gear performance too, so you’ll certainly never be short of urge on this front.

The jewel in the Q50’s crown, at least from a technological point of view, has to be its ‘Direct Adaptive Steering’ (DAS).

Now, you may have heard that many cars these days are ‘drive-by-wire’, which means that when you press the accelerator pedal, there’s no actual mechanical connection to the engine – the pedal is more like a ‘switch’, and the throttle position is converted to electrical signals and sent to the engine by ‘wire’.

This is the same sort of idea with Direct Adaptive Steering, where the driver’s inputs are sent to a trio of electrical control units, which then direct a high-response actuator in the steering rack to move the wheels.

So why is Infiniti’s DAS a good thing?

Since there’s no mechanical connection to the wheels, for one thing, you won’t feel bumps from potholes or washboard surfaces on gravel roads through the steering wheel.

This provides more precise steering control since the steering wheel stays completely still while the wheels might be bouncing or moving from left to right. When testing, the steering was very stable, especially while driving on a rough dirt road, and meant no input corrections were needed to compensate for the bumps.

Also, from a performance point of view, by eliminating the mechanical linkage from the system, steering is even more responsive since there’s no latency caused by the differentials and gears.

The steering still provides the right kind of ‘feel’ for hard cornering, with the help of a camera that tracks the car’s motion relative to tyre and steering wheel positions, and will let the driver know what’s going on at road level by sending feedback to the steering wheel.