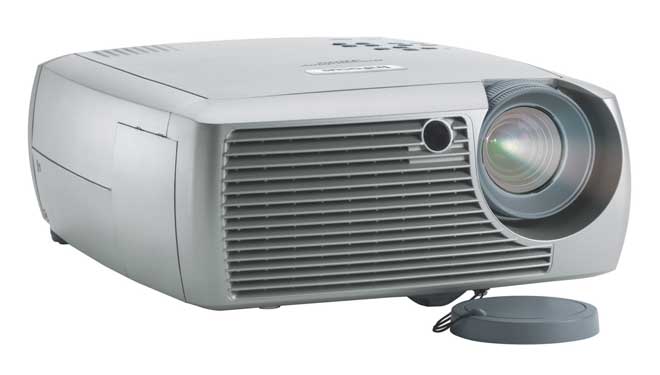 When it’s possible to pick up a projector as cheaply as the InFocus ScreenPlay 4805, big-screen lovers can’t help but wonder how plasma and LCD screens compete. Even though it’s less than $2,500, the image size it offers is beyond compare when judged against the other leading home theatre display technologies.

Like the Mitsubishi HC900 the 4805 is based on DLP technology. This means that it’s prudent to have a product demonstration before making your purchasing decision, just in case you notice the Rainbow Effect. This shouldn’t be a problem for most viewers though, as DLP technology has advanced greatly over recent years, helping to lessen this phenomenon.

Considering it’s so much cheaper than the HC900, it?s no surprise to see that this projector doesn’t equal the brightness levels of its more expensive rival. If you’re looking for a projector to watch in a sunny room, the 4805 isn’t it. But if you’re able to view the projector in a darkened area, the slightly lower brightness of this projector won’t be a problem as it’s still more than bright enough for movie viewing. This slightly lower brightness seems to have paid off when it comes to fan noise, as it’s noticeably quieter than the HC900. Yet for those who demand total silence from their equipment, the mild buzz of the 4805 will probably still prove annoying, especially compared to the near-silent fans that can be found in other projectors.

Even though it doesn’t come close to the contrast ratio of the HC900, this projector gives most equivalently priced LCD projectors a thorough hiding. Image detail in darkened areas of the screen remains nice and crisp, although the overall image quality does appear a little washed out. Colours are also rich and vibrant, although again it doesn’t come close to the rich colours of the HC900.

At this price point it’s impossible to find a high resolution projector, so the native resolution of only 854 x 480 isn’t unreasonably low. However it does result in a relatively pixelated image when compared to more expensive projectors, although the fact that it’s a DLP projector does help somewhat (DLP projectors have less visible pixels than LCD projectors).Â The fact that it’s unable to project an extremely large image over a short range means you’ll need a large room to make the most of it, and it also lacks any lens shift for those awkward mounting spots.

It’s amazing to see how rapidly front projection technology has advanced, especially at the entry-level. The InFocus ScreenPlay 4805 is a stellar example of this speedy evolution of technology, and is a solid basis for a budget home theatre.