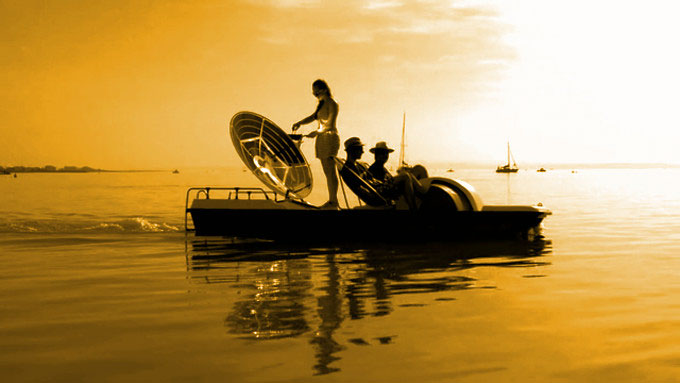 Imagine being able to BBQ whenever you want provided it was sunny outside, and never needing a flame again. That’s a possibility thanks to some space age tech coming to at least one barbecue on its way to Australia.

Some crazy kids out of Austria have been working on something that Australians love getting in on, with a new style of BBQ that should be safe to use regardless of if there’s a fire warning in effect or not.

It’s called the “PhotonGrill”, and it’s a BBQ unlike any other, consisting of an inflatable bowl that collects the light from the sun into its metallic reflective centre, which is where you’ll attach a frypan. Within five minutes, a temperature of 260º Celsius can be reaches, allowing anyone to cook without an open flame or the risk of setting fire to anything.

“We discovered a technology to make a solar BBQ portable and provide those without a garden or backyard to BBQ, the freedom of outdoor cooking wherever they want,” said Clemens Lehner, one of the inventors of PhotonGrill.

“After many years of researching and experimenting the technical development of PhotonGrill has been finalised.”

That final product is essentially an inflatable parabolic mirror that focuses sun rays onto a cooking utensil, which in turn warms the tool up rapidly, allowing you to cook using the sunlight.

The technique isn’t totally new, mind you, but packing it into a small space is, and to do this, the team of inventors looked at NASA experiments for inflatable antennas, expanding on the concept to create an inflatable bowl of a mirror that can be packed into a space slightly smaller than five kilograms and fit into a backpack.

“The ultimate goal in product development has always been maximum portability, ease of use and high performance for us,” said Lehner. “This allows for use not only in city parks, but also for more adventurous excursions and also day trips.”

The result is a PhotonGrill solar cooker able to hold up to 5 kilograms of weight from the pan and its ingredients, while the unit itself is design to handle wind so your ingredients don’t necessarily go flying at the first sign of a gust.

Indeed, it looks like a very interesting concept, and as the summer months get hotter, it seems like a great idea that doesn’t involve electricity or an open flame.

Right now, however, PhotonGrill is in the crowdfunding stage, with the product hitting Kickstarter in an attempt to raised 100,000 Euros, with the units costing around 200-250 Euros each, translated roughly into 310 to 400 Australian dollars before shipping.

Speaking to representatives for the company, we were told that the PhotonGrill would be made available locally if the funding goal was reached beyond those who ordered on Kickstarter, so here’s hoping, as it seems like a great way of getting cooking done at the beach or park.