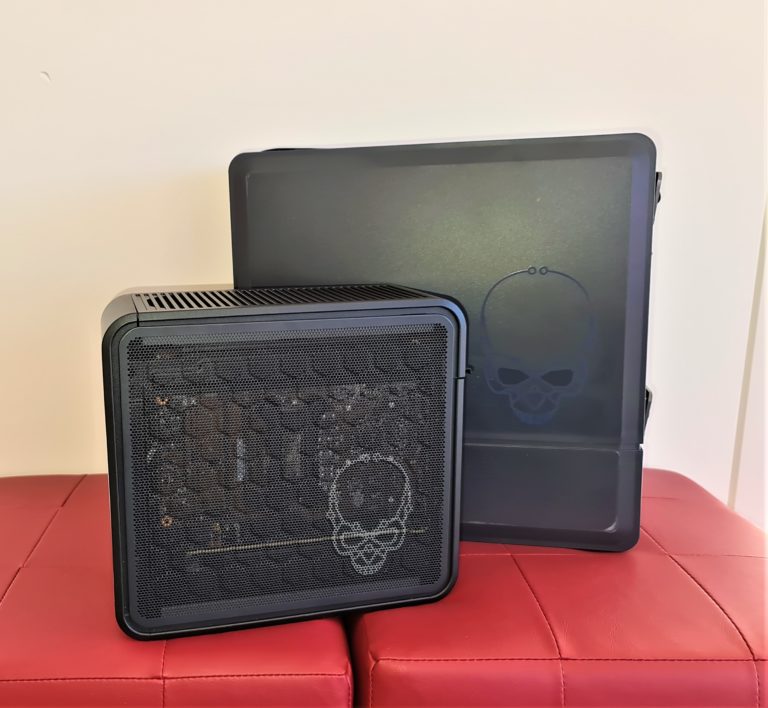 Features
Value for money
Performance
Ease of Use
Design
Reader Rating0 Votes
Amazing performance from a minuscule 5L box
You choose the level of performance
PCIe expansion including double-width card
Internal 500W power supply
Really cool transit case
Easy access to internals – remove two screws
Cooling dictates it can only stand upright and can get a little noisy
CPU options are still 9th gen
Skulls (and the case) do not light up - and that may be a good thing
4.5

Houston, we have a problem – a bloody big Intel NUC 9 Extreme landed on my review bench and a) it is the most powerful PC I have ever tested and b) I don’t want to give it back.

Let’s look at the ‘bloody big’ first. A normal NUC (Next Unit of Computing) is a small 4” square computer. The Intel NUC 9 Extreme model PPNUC9I9QNX is huge (by comparison) at 238x216x96mm.

And as for giving it back – I don’t have an option as it is an engineering sample to salivate over.

Before we get into the review, know that this NUC normally comes as a bare-bone kit with the processor and motherboard only and you add memory, drives and a video card that may cost almost as much. There are also other processor variants of this form factor.

Who is the Intel NUC 9 Extreme for?

Its aimed at gamers but in reality, it’s a damned powerful small workstation PC with enormous flexibility.

So, it is great for Creatives, CAD, Engineers and power users as well. Or for those that feel the need for speed.

Well it is a kit, so its demo day!

Possibly to Intel’s mortification, I decided to tear it down. After all, it is a kit, and you need to be able to add or subtract pieces. Arms with a small Philips head screwdriver only

The other half is a fully enclosed CPU and motherboard package

The motherboard has two M.2280 slots for PCIe NVME or SATA6 SSD or Intel Optane and 2 x SODIMMs. That’s it. There are some other headers that you can use to connect additional USB etc.

Reassembly was just as easy and voila – it works.

So as for access, it is fine if a little fiddly. And the only user-replaceable parts are in the CPU assembly (Intel call this a Compute Element).

I am guessing that Intel will keep this style of NUC chassis and that you can look forward to other CPU (within its 500W capacity) in the future. I also understand that Razer, CoolerMastrer and others will be making their version of NUC cases to accommodate this i9 assembly.

Let’s look at the processor

The Intel Core i9-9980HK 14nm is a laptop processor with a 45W TPD. In layman’s terms, it will scoot along all day at somewhere between 2.4 and 5GHz as long as the core temperature is below 50°. Given that the case has a great thermal design, we don’t see that as an issue for full-on gaming.

The integrated Intel UHD Graphics 630 is fine for office productivity and most undemanding games.

You can read all the processor benchmarks here. As expected, it is only beaten by Intel’s desktop processors that don’t have power or thermal restrictions. Interestingly the 10th gen i9-10980HK mobile processor is only 4% faster. But when you look at the i9-10980XE desktop processor, it’s a whopping 41% faster.

Intel Optane uses a basket of high-speed cache to give 3200/1600Mbps Sequential read/write.

It all depends on what you are doing. Note a high-speed 2TB unit will cost up to $700.

Note there is no internal 2.5” storage, but you can get Thunderbolt 3 or USB-C 3.1 Gen 2 external storage at reasonable prices. The only issue to remember here is what types of files you will be backing up (writing) or loading (reading) as some have better large file performance.

GadgetGuy’s take – Intel NUC 9 Extreme is damned fast, and I love it

Well, Nuc me. I am not a gamer, and I am very happy with a Surface Pro 7 for my daily drive. This is not for me, yet I want it.

It is essentially laptop-grade hardware and a desktop GPU. The only way you will get faster is to go to desktop hardware.

I can see where the Intel NUC 9 Extreme in all its guises fits, and it is perfect for gamers, creatives and more. It offers you the choice of speed for price in a world where ‘desktops’ hardly exist anymore.

Rating this is based on expandability, price to a degree (although we try not to comment on that), and quality. The Intel NUC 9 Extreme meets or exceeds all our paradigms. It is unique, although other makers are picking up the NUC form factor.