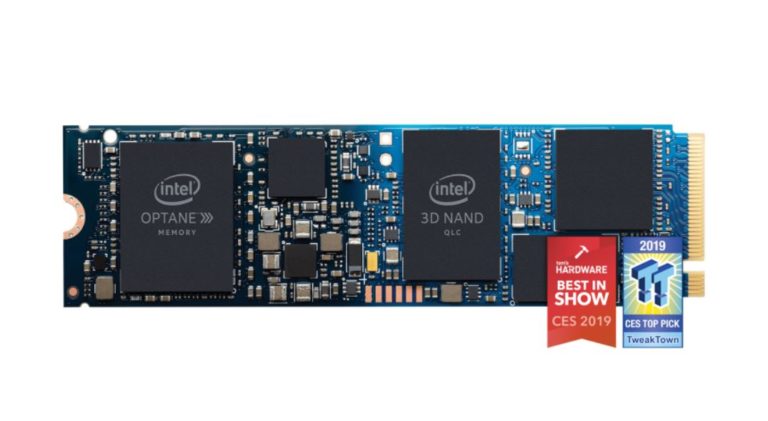 Adding an Intel Optane M10 M.2 card is a great way to speed up a hard disk-based system. Intel Optane H10 is the new way to further speed up an SSD system. It combines both into an M.2 card.

Coming soon, Intel Optane H10 (US Website here) – a memory accelerator, combines on a single M.2 card with up to 1TB of Intel QLC (quad level cell) 3D NAND, PCIe NVMe SSD. The result is up to 2X faster in productivity apps and 90% faster for large media files than a standard SSD.

In case you did not know GadgetGuy likes Intel Optane. Last year we showed how the addition of a $20 M.2 stick took sequential read/write of a SATA 6 hard disk from 78/53Mbps to 930/159Mbps – no brainer. One minor issue – you needed a spare M.2 slot and at least a 7th generation Intel Core processor to do it. Note that Intel Optane H10 needs Windows 10, an 8th generation Core U or later, and an M.2 PCIe NVMe 3.0 x4 slot.

How Intel Optane H10 does it

It comprises two parts – an Optane memory accelerator and Intel QLC 3D NAND SSD. QLC is a little slower than some NAND, but it is less costly and has better longevity.

For the 2x increase in productivity apps (which do a lot of random read and write) it places the file in its Optane memory that is faster than SSD – operating at speeds close to DRAM. Typically, the Optane memory segment is 16 or 32GB and reflects the size of files you are likely to encounter. The Storage section is 256/512/1TB.

The performance increase in large files is due to its ability to read or write sequentially to the SSD segment.

But combining has one small flaw

The PCIe NVMe controller and the Optane controller are separate and share the PCIe NVMe 3.0×4 lanes. If you are transferring large files (video editing), then you may achieve better speeds with a top of the range Samsung EVO or similar capable 3500/3000Mbps sequential read/write.

Where we will see it first

Laptop and desktop OEMs including Dell, Lenovo, HP, Acer, and Asus are first recipients of Intel Optane H10 as they don’t need to have two M.2 slots to implement Optane. Retail versions may be some time away.