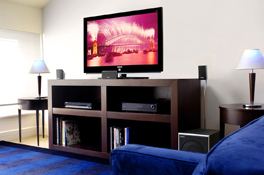 Along with HD DVD, Blu-ray is a format that offers true high definition digital video in the home. Australian DVDs typically offer a resolution of 720 pixels across by 576 tall. Blu-ray (and HD DVD; the performance is much the same with both formats) offers 1920 by 1080. That means that there is five times as much detail in a Blu-ray movie than there is in its DVD equivalent. We all know how good DVD looks. How much better, then, is Blu-ray?

The Blu-ray disc looks just like a DVD (although the new packaging is more compact, so you can fit more on your shelves). But whereas a DVD can hold 4.7 gigabytes of data in a single layer, or 8.5GB in a dual-layer version, Blu-ray offers 25 or 50GB respectively. This allows for high quality, high definition movies (or around six hours of HD viewing a single 50GB capacity disc). And it also provides more room for sound.

New video encoding standards will also be on offer. The video can be in the same MPEG2 as that used with DVDs, or in the VC-1 Advanced Video Codec, a variation of the video compression algorithms used in Microsoft Windows Media, or in MPEG-4 AVC High Profile.

Both of these last two are later, and consequently more advanced, developments than MPEG2. They permit higher compression levels than MPEG2 with the same quality of video being retained, or improved quality by using same space on the disc. As always, trade-offs will need to be made between the amount of compression and other material (such as special extras) recorded on the disc.

The Blu-ray discs themselves manage the feat of holding more data than DVDs in a number of different ways. Most obviously, the use of a shorter wavelength ‘blue’ laser, rather than the red one used for DVDs, allows finer resolution and therefore smaller and more closely packed coding pits in the Blu-ray disc’s surface.

In addition, instead of being covered by 0.6 mm of plastic like DVDs (and HD DVDs), the data layer is only 0.1 mm down from the surface. In order to protect it, new scratch-resistant, plastic materials have been used.

Expect to see a lot of Blu-ray over the next few years. While DVDs offered a world of improvement over VHS and broadcast TV the better part of ten years ago, that was on the then predominant glass tube TVs. These days, with availability of high quality, low cost flat panel TVs and projectors, all that increased resolution will transform the home cinema experience.

Want to know more about Blu-ray? Click here for an exclusive Australian-first web review of the Samsung BD-P1000, or read our article Movies on Blu-ray, a look at the clearer picture and higher interactivity the Blu-ray format offers, plus a list of some of the initial release of Blu-ray movie titles.