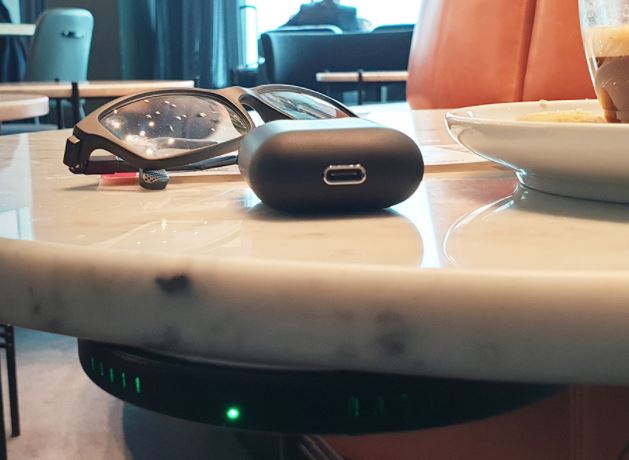 InvisiQi is a new type of ‘long-distance’ Qi charger that can transmit a Qi wireless charge between 15-30mm away from the charge plate. In other words, it passes through most desktops or benches to provide Qi charging.

And the problem you did not know you had is that charge pads are quite ugly lying around on bedside tables, desks coffee tables and more. InvisiQi is the easy way to have Qi without the visible inconvenient pad or cable.

We set out to see if this Aussie invention from Melbourne is as good as it sounds.

Note: we use FAIL, PASS or EXCEED against a suite of test paradigms. PASS means it meets our expectations for that test.

The pad is mounted flush under a desk/table/sideboard. The phone sits on top from 15mm to 30mm away and charges through that surface.

It will work through most ‘organic’ materials like stone, timber, marble, plastic, or glass. It will not work through ferrous metal or some laminated glass that uses thin layers of aluminium silicate material to make it stronger.

To assist with positioning, it comes with a top and bottom template, magnets for alignment, mounting hardware, and you can access an installation video.

But the trick is that most Qi chargers only transmit power about 3mm from the pad, which is not enough, especially if you use a thick case. This has a range of 15-30mm although the Qi efficiency drops off as you move to the limit.

We tested on 15mm glass, 15mm laminated particleboard IKEA bookshelves and 20mm Caesarstone. All worked well. A piece of 30mm hardwood did stop it when using a case. It was also unable to fast charge at this distance. All tests were on the 20mm Caesarstone countertop.

It is extremely hard to measure Qi charge efficiency (the loss between power output and what makes it to the battery). It typically varies between 60% and 85%.

But we don’t have any efficiency specs on ‘long distance’ charging. So as Qi is a standard, we expect the InvisiQi to conform somewhere in that range.

We estimate that the unit provides 75-80% energy efficiency at 15mm and 70% at 20mm. As a piece of 30mm hardwood stopped the charge, it reaches the limit of 60%. I note that while the charge pad states 15-30mm InvisiQi website is saying 28mm.

We fully discharged the new LG Velvet (9W Qi). Using the Belkin 10W Qi charger a recharge took just under 5 hours. With the InvisiQi it took 5 hours and 25 minutes – well within Qi spec.

We tested with and without a case – no difference.

While you try to place it dead centre on the decals, there is about a +/- 10mm sweet spot that you need to be within. The Belkin desktop charger is more forgiving.

Glass (frosted or clear) desks from the likes of IKEA, Officeworks, Fantastic et al., are invariably 6-9mm thick, so the minimum distance of 15mm (where the long-distance magnetic resonance starts) is unsuitable unless you put a spacer under the glass.

In any case, the unit is best screwed to the underside of the desk – that will not work with glass. Although there is a 3M double-sided adhesive pad supplied just in case you can’t use screws.

Laminated ‘paper’ like you get at low-cost stores: This is a very thin laminate – often white, coloured or a faux woodgrain and it has very limited surface abrasion rating. Constantly placing a phone on it charge will show after a short time. Thicker melamine and laminate surfaces are fine.

Painted surfaces, e.g. spray-on Polyurethane/nitrocellulose paints (not 2-pack) have a hardness of an HB graphite pencil so if it can leave an indent then forget that surface unless you use the decals provided.

The pad and phone generate a little heat (we measured 32° under a Samsung Galaxy S20 Ultra – this is normal) so thin laminates or paints may deteriorate fairly quickly.

The decals are, in my and my wife’s opinion, boring. I am sure InvisiQi can come up with something classier or just a discrete phone outline.

Post review note: WTX is aware of this and can produce customised decals for corporate sales. Lets hope thier next run has more intersting decals.

It cannot charge through a metal reinforced case or popper.

Does Qi charge degrade your battery faster than USB-C?

The short answer and only answer is NO. All rechargeable batteries have a finite charge cycle life – typically 200 times for a cheap battery and 400-500 for a good one.

Qi intelligently communicates with the battery and delivers just what it needs. In tests over 100, 200 and 300 cycles two identical phones discharged to 30% and automatically started the recharge cycle with USB 5V/2.4A and Qi 10W. At the end of 100 cycles, the USB had 82% battery health (charge capacity remaining) versus the Qi at 90%. At the end of three hundred cycles, the USB was 40% versus the Qi at 70%.

The science says, “By continually topping up the phone battery during the day (leaving it on a Qi charge pad) you will increase the lifespan of your battery.

According to the research battery lifetime  increases by 4x if the depth of discharge is less than 50%, rather than 100% (one charge cycle).”

Not to mention the number one ‘non-warranty’ problem of breaking the USB connector.

Who is going to buy InvisiQi?

If you are a Qi aficionado, then this is for you. There are now over 150 current make/models of Qi phones and the rapidly increasing number of Qi charge earbuds and other devices.

I can see it in classy, timber executive desks (do we have those anymore?), sofa arms, side tables, timber shelves and more.

It is a no-brainer for cafes and restaurants to install a few on benches or tables.

And offices should consider these for work stations, reception tables and huddle tables.

The only things two things to remember

Joe and Jane Average will buy a desktop charger and probably think $50-100 is pretty steep. Or if they are looking at something for the bedside a space-saving combo Alarm clock and Qi charger may be better.

But if you want a C-Tick approved, hidden charger this is the answer. And it is not too badly priced for that. By comparison, the Belkin 10W Charging Spot (Apple MFi certified and fitted into furniture) is nearly $200.

WTX is willing to deal for bulk and commercial installations where the 4-way adapter makes it even better value.

How we rate this

As a 10W Qi charger, there are better efficiency and cheaper desktop chargers.

As a long-distance charger, there are few options. In every case, it PASSED our tests and was within spec. The website makes no outlandish claims, and it meets Qi-certified standards.

Apart from the caveats, we have identified it is a valuable and useful product to those that want it and are willing to pay for it.

Features
Value for money
Performance
Ease of Use
Design
Reader Rating1 Vote
It is a permanent fitting to keep desks uncluttered
Not to hard to fit but you may want to AirTask it
You pay for the priviledge of anm uncluttered desk
4.2