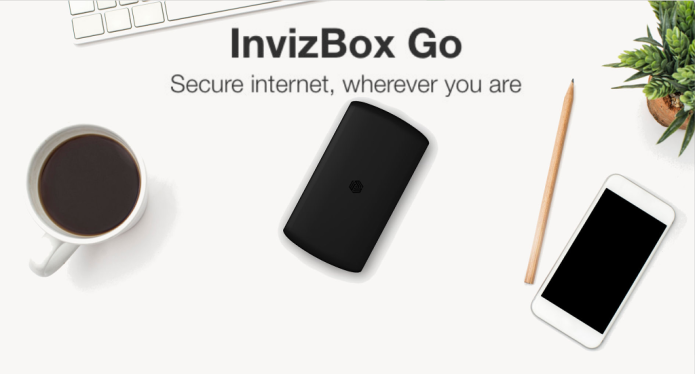 InvizBox has a mission to significantly enhance online privacy. Its first products are the InvizBox 2/Pro and the portable InvizBox Go.

It is a small, battery operated, Wi-Fi hotspot with a built-in VPN (virtual private network). The 2/Pro is for households and connects to the router via Ethernet – otherwise, they are functionally equivalent.

It connects to your broadband. A VPN protects any Wi-Fi device you then connect to its SSID. InvizBox uses IP Vanish a well-known ‘no-log’ VPN provider with over 61 servers in 18 countries. Or you can add your own VPN server if you have one.

Why do I need a VPN?

Simply put it encrypts your traffic before it leaves your device. That data stays encrypted while it goes through your ISP’s network. Once it reaches the VPN’s server, it then decrypts the data and sends it off to the internet and vice versa.

That means no one can read your web traffic data – not Facebook, your ISP or any man-in-the-middle attackers on public Wi-Fi spots. It also disguises your IP address, so no one knows it is you.

International VPN servers can also be used to overcome things like Geo-blocking (where say Netflix USA only wants its traffic in the USA). Or where ‘pirate’ downloading torrent sites are blocked (like Australia blocks many known torrent sites).

A good VPN provider keeps no logs that could incriminate you. A bad VPN provider like Facebook’s Onavo Protect is simply a way for it to keep track of everywhere you go on the internet. Do not us it!

Now even if you do nothing wrong online, don’t look at adult sites etc., it is most useful for banking transactions and stopping eavesdroppers getting your data in the clear (unencrypted).

The downside of VPNs – all of them

When I first tested the InvizBox Go, it was slow. That was because by default the VPN server in Europe. Ping time (latency) was 333ms and download/upload speeds 12.13/6.7Mb/s.

The downside is speed loss and increased latency which is an issue for gamers and voice over IP speech.

When downloading 10GB of files from my corporate server in Sydney

I tested 10GB of ‘media’ content from an international Torrent site. Telstra NBN could not access it.

My best guess is that the InvizBox Go can achieve about 20-25Mb/s throughput.

And there is more. InvizBox Go

Before you say, InvizBox is slow realise that you can tune it for the fastest local VPN server and it supports multiple devices (300Mb/s should support up to four active devices).

This is foolproof – even a novice could use it. It is not cheap and will require ongoing subscriptions after the two-year premium VPN service runs out.

The prime advantage is that it is a portable device that provides VPN service to whatever you connect to it. That could be very handy if you are using a guest computer or smartphone.

I already use Private Internet Access – a paid-for software-based VPN. Being software, it can be installed on up to five devices at the cost of US$69.95 for two years.

The advantage of this is that it will get higher VPN speeds if your router supports it, e.g. it could connect at 866MB/s using Wi-Fi AC and even faster using MU-MIMO. It also has 3041 servers in 28 countries. I really don’t notice any speed reduction when using the NBN connection, and it encrypts Wi-Fi between the client device and the router.

Oh, and my favourite Irish Joke (apart from me)

Did you hear about the Irishman that went to London to blow up a bus? He burnt his lips on the exhaust pipe!

What would I buy? I am not sure.

The concept of InvizBox Go is great – its foolproof setup and portability. I like that protection is device agnostic – if it connects by Wi-Fi.

Let’s just say you need a VPN – if it is not a free one like Facebook Onavo. It is over to you.

Whatever you do VPN is the buzzword of 2018 with companies like Norton et al. releasing hardware VP routers.

Its recommended price is €119 including worldwide shipping. The website says it includes two years premium updates for IP Vanish but later an option for two years takes this to $199.

It appears that after the included Premium service expires you can renew for €4 per month or go back to a limited bandwidth service.

I won’t formally rate it as I don’t have established paradigms for hardware VPNs. It does everything it states. Its definitely at least four out of five.