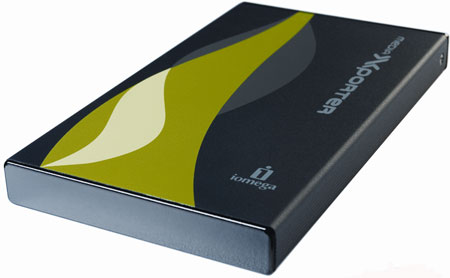 Iomega have released the new Media Xporter Drive, a game-oriented portable hard drive that provides cross-platform media storage for Xbox 360 and PlayStation 3 consoles, making it easier than ever to utilise today’s popular game consoles and high definition televisions and other large screen TVs to share photos, videos, and music collections with family and friends.

The wallet-sized USB-powered 160GB Media Xporter Drive utilises the USB 2.0 ports on the Xbox 360 or the PlayStation 3 to give gaming enthusiasts a convenient new way to enjoy music, digital movies, and photos through the family game console, without the need of a PC or digital media adapter. The new Iomega Media Xporter Drive has been tested for compatibility with the Xbox 360 and the PlayStation 3 and, like other Iomega products, is a complete storage solution that includes value-added software for converting file formats not natively supported by the game consoles.

Because the current Xbox 360 and PlayStation 3 consoles support HDMI connections and high-definition television resolutions of up to 1080p, photos and videos stored on the Iomega Media Xporter Drive (and displayed through either game console) take on the breathtaking sharpness and clarity of today’s most advanced HDTVs.

The Iomega Media Xporter drive natively supports PlayStation 3 and Xbox 360 compatible formats such as MP3, MPEG 4 and JPEG, and it also comes with video conversion software to convert additional video file formats into compatible game console formats. Prism Video Converter MX software can be downloaded free of cost to convert input files in formats such as QuickTime, AVI, VOB and others, into MPEG-4 files that are playable by the game consoles.

Designed for use with XBox 360 and PlayStation 3 game consoles, the Iomega Media Xporter Drive USB 2.0, 160GB is also compatible with Apple computers (Mac OS X 10.1 and above) and with Microsoft Windows 2000 Professional or above, including Windows Vista