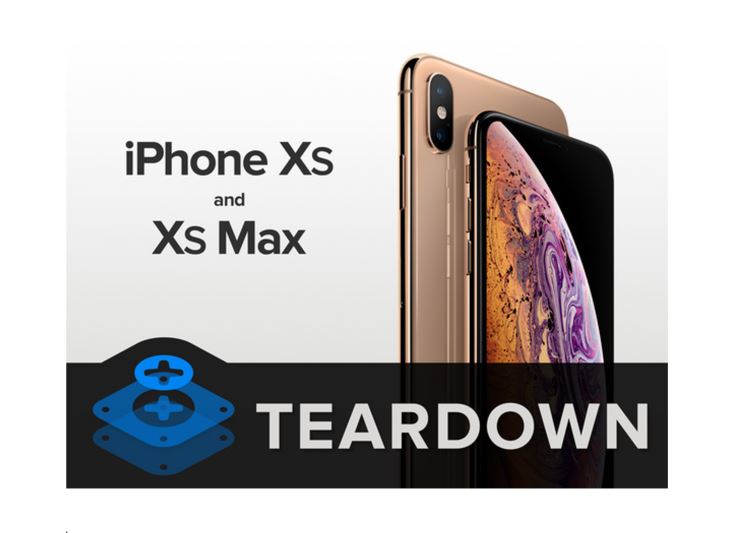 iFixit has been busy with the new iPhone XS and XS Max teardown. So busy they had to fly to Australia as we were the first place in the world to put them on sale.

The full teardown is here. The result is a six-out-of-ten repairability score. It also revealed a few secrets Apple did not openly state.

The L-shaped battery has a new patent to get around tricky problems like thermal expansion, using different layer sizes and precisely folding electrode sheets cut into complex shapes to fit those contours.

Interestingly the improved IP68 rating showed no more waterproofing than its predecessor.

Apart from the new A12 Bionic SoC most chips were updates from the X. Sound now has dual amplifiers and there is a separate amp for the haptic feedback. Many of the chips Apple brand reflecting its design cred.

And as predicted the Apple stoush with Qualcomm has seen the modem changed to an Intel XMM7560. This delivers LTE Gigabit speeds via up to five carrier aggregation at Cat 16 down and Cat 13 (150Mbps) up. It supports up to 35 LTE bands.

Wi-Fi AC is dual-band, MIMO and Bluetooth is 5.0 and has NFC for Apple Pay only. The XS uses a different chip to the XS Max. iFixit does not know why.

In all iFixit said the design was very like last years iPhone X. Its only significant concern was the glass on front and back doubles the likelihood of drop damage. If the back-glass breaks, you’ll be removing every component and replacing the entire chassis.

Channel 7 Sunrise GadgetGuy Val Quinn now has both units, and his only gripe is that the Apple Chargers are 5V/1A. That means a theoretical charge time of 4.5 hours for the XS and 5.3 hours for the XS Max. You can see his video overview here.

The dual battery on the Max would benefit from higher amperages – using an iPad charger. We will let you know when we test with a 5V/2A charger and the iPad charger. Already companies are offering 30W fast chargers on eBay.