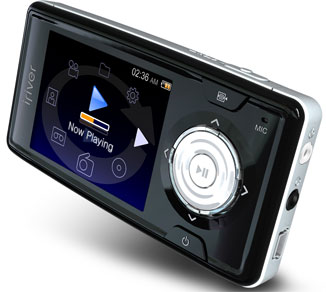 While it can be scary buying a brand you don’t recognise, one of the advantages is you do tend to get a lot more kit for your cash. Because iRiver doesn’t have to support a multi-million dollar marketing machine, its players are cheaper and do more. They might not be as stylish or elegant, but will you care when you’re watching the latest music videos on the bus, on a device that cost less than $200?

The X20 really packs it in. iRiver prides itself on making small, slim devices, and the company’s standard music-only device the P10 is only a fraction the size of a credit card. With a bit more room to breathe, the X20 can do a lot more.

There’s a 2.2″ 320×240 TFT display (not OLED unfortunately) with which you can view photos in the usual formats, as well as watch film clips in MPEG4 and WMV.

We say film clips, though technically you could load up a whole movie, which should fit easily in the 2GB of onboard memory, especially at 320×240. Whether you’d want to watch a whole feature film on this tiny screen though is another matter.

There’s a built-in FM radio, as well as a microphone and a line-in port that allows you to directly-encode either from an analogue source or from an external mic. The radio uses the earphone cord as the antenna.

If you do fill up the 2GB (or the 4GB and 8GB, models which are also available) you can expand the memory using a micro-SD card. It’s not the cheapest flash memory format, but it is very much the smallest.

iRiver recently released the third iteration of its Plus music and video management package. While it doesn’t connect to an online music or video store, it’s certainly easier to use than having to drag and drop files with Windows Explorer – although you can do that too.

The twin-pane interface makes it easy to see which media is still on your PC and which has already been transferred to the player.

There are plenty of options for encoding and importing CDs, allowing you to set bitrate and all the usual things. You will need to create your MPEG4 or WMV video files using other software though – there’s no way to “rip” a DVD to your player, for instance.

While not as elegant as iTunes or Sony’s SonicStage, iRiver Plus 3 is functional and the company does release regular updates.

There are also alternate firmware systems you can use with iRiver players created by keen amateurs, but we’ll leave installation of those for the Linux set.

With so much functionality it’s probably reasonable to expect that creating a completely intuitive interface for this device would be a major challenge. iRiver has almost pulled it off – for the most part the circular interface managed by a circular control system works well. It’s easy to find your media, even if sometimes it’s an initial fiddle to get your player in the right mode for playback.

Sound quality is excellent, although the included earphones aren’t especially impressive. Tested with the high-end Sony EX Monitor headphones that came with the Walkman though, and the X20 sounds great. There are a number of EQ settings, but there’s nothing fancy like noise cancellation, of course.

Video looks surprisingly good on the 2.2″ screen, and it’s a great format for watching YouTube clips (that you’ve captured and converted yourself) or for music videos. Trying to watch a whole feature film though really is a recipe for a headache.

If it’s features you want, it’s features you get on the X20. Music playback is great and you can tweak the sound with the EQ. Video works even if the screen is tiny. And with a replaceable battery and expandable memory, this little machines should have a longer than usual shelf-life.

It’s not the fashion-statement that the other players offer, and the included software is functional rather than your one-stop shop for all media playback.

But with a price like this married to this feature set, the X20 is hard to pass up.