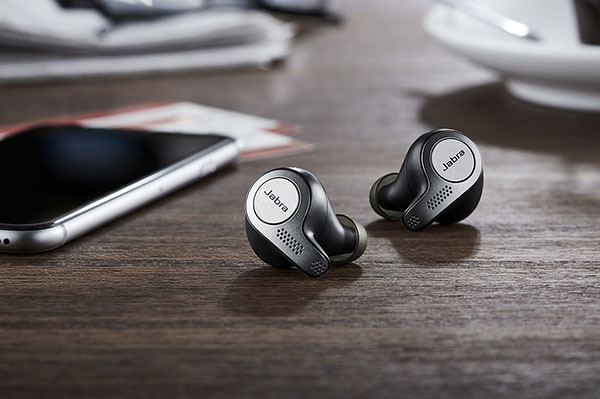 The Jabra Elite 65t earbuds are “True Wireless” models because they’ve eliminated the cable between them. We put them through their paces.

The Jabra Elite 65t buds follow the now familiar pattern: they connect wirelessly to each other. When not in use they sit in their shaped receptacles in a charge case.

They are rated at five hours of use on a full charge, and can be charged twice more from the case, giving a total of fifteen hours away from power.

They are extremely light. I’ve been meaning to get myself a pair of scales with higher resolution than the single grams of my current model. But I haven’t yet, so I’ll limit myself to saying that they weigh around six grams each, twelve for the pair. Jabra says 6.5 for one, 5.8 grams for the other. Pop them in your ears and you won’t notice their presence. Shake your head all about, and they’ll happily stay in place.

They also sit quite close in your ears. I love the Bose SoundSport Free earbuds but they do give the wearer somewhat of a Teletubbies look. The review ones were black and silver grey, and looked subtlely businesslike.

The charge case – well it charges the buds

The charge case is 67 grams, so carrying it on your person is no great burden. It’s about the size of a flattened egg. The lid is a bit grabby, and more than once when it finally popped, the buds spilled out.

A single LED lights when it’s plugged into power. The LED flashes on with the lid opening and closing. Both it and the LED inside the case indicate high, medium or low charge status by colour.

It takes a couple of hours to charge up the case using the supplied Micro-USB cable to a 5V/.5A (or greater) USB socket (charger not supplied). Fast charge ten minutes gives an hour of use.

The buds are IP55 rated, which means mostly impervious to dust and good for withstanding moderate water jets from any direction for fifteen minutes.

That ought to mean they’re safe from users’ sweat and a bit of rain. The standard warranty is one year, but there’s a two year warranty for water and dust damage if you register via the app.

Comfort depends on the right tips

The buds come with three sizes of soft silicon tips. The middle sized ones are pre-fitted. I found the larger ones the best for my ears. They slipped on easily enough and were firmly held in place. There are no wings or other device to lock the buds in your ears, but as I said, they didn’t feel at all insecure at any time.

The drivers are oddly described as being 6.0 by 5.1mm in size. I’m not certain what that means, although it could be that the drivers are slightly oval in shape rather than round. They are rated at 103dB sensitivity for 1mW input, with a maximum of 8mW. That works out to a maximum output of 112dB, which is way higher than any sensible user should want.

There are four microphones, two on each earbud. Indeed, the little protrusion on each of them looks kind of like a microphone boom, and when you put them in your ears, you point that bit towards your mouth. Jabra says that the four mics allow good ambient noise rejection. It also uses what it calls an “acoustical open chamber design” to provide wind noise protection.

Communications use Bluetooth 5.0. No special codec support is indicated in the specifications, so it’s safe to assume that things like AAC and aptX aren’t provided.

The slim instructions tell you to get the “Jabra app”. Since the iPhone App store had four “Jabra” apps, I chose “Jabra Sound+” as looking the most appropriate. When I started it up it was clear it was the right one because it opened with a picture of the Jabra Elite 65t earbuds and instructions to get them going. Said instructions were to that you pair using the phone’s regular settings.

I did that then returned to the app, and after a couple of seconds it took me into the control screen. This has sections to change settings for calling, for listening and for selecting the voice assistant. I was using an iPhone, so it was Siri, with a button for Amazon Alexa as well, the latter labelled (Coming soon). There was also an five band graphic equaliser (the bands centred on 60, 250, 1000, 4000 and 7600 hertz).

Plus a “Device details” section which includes a user manual, FAQ and other help, a link to register the earbuds for warranty, a language selection for the voice prompts (English, French, German, Chinese and, I think, Japanese are available). And, of course, there’s a firmware update section. Which the test earbuds needed.

That went very smoothly. Of course, one should not update the firmware of a battery powered device without it being charged up. Jabra handles this by using the act of putting the buds in the charge case and closing the lid as the thing that starts the update installation. Clever. It took several minutes for this to complete.

These are really comfortable earbuds. The large size silicon tips allowed an excellent seal – important for bass performance, and for holding them firmly in place and for providing isolation from outside noise. More on that outside noise in a moment. And they weigh, to a first approximation, nothing.

In their native state the sound from the earbuds was clear, with a tendency towards a slightly advanced high frequency band. But you can change that and tailor the sound pretty much any way you want with the EQ in the app. The bass down to the mid levels was respectable, although not standout. I used the 60 hertz EQ slider to push it up a bit, but the extremely deep stuff on material like Switched on Bach was hinted at more than full delivered. Eminem’s strong bass lines were powerful and propelled his music, but again lacked that sense of really deep bass extension.

Still, song after song, piece after piece, genre after genre, these earbuds delivered a lively, enjoyable listening experience. A loud one too when I wanted it.

Sound isolation was good. Now that’s a benefit in many circumstances, but can be a problem in some. The app performs a clever trick. You can feed some of the microphone sound back into the headphones to overcome the isolation. That kind of thing can be very useful if you’re out exercising on a public street or whatever. You can even set the mix level for these external sounds. I did find that on a blowy day there was a big of wind noise being picked up by the microphones, notwithstanding the “acoustical open chamber design”, and being fed into the music. But having it on is entirely optional.

The right earpiece has a single control button for play and pause, answering calls and hanging up afterwards, and invoking Siri.

The left earpiece has two little raised dots. One increases volume and skips forward if you hold it, the other reduces volume or skips a track backwards.

In both cases, they were sprung with just about the right amount of tension. Not so heavily I ended up jamming the thing further into my ear, nor so lightly that an accidental brush would operate it.

With an iPhone 8, the connection was rock solid to at least 20 metres, regardless of how my head was orientated with respect to the phone.

GadgetGuy’s take (as an audiophile)

The Jabra Elite 65t True Wireless Earbuds are a very practical, high quality way of having personal audio with you.

Which kind of brings us to a natural comparison: Jabra Elite 65t? Or Bose SoundSport Free?

It isn’t really an easy choice to make. Most people would be happy with either.