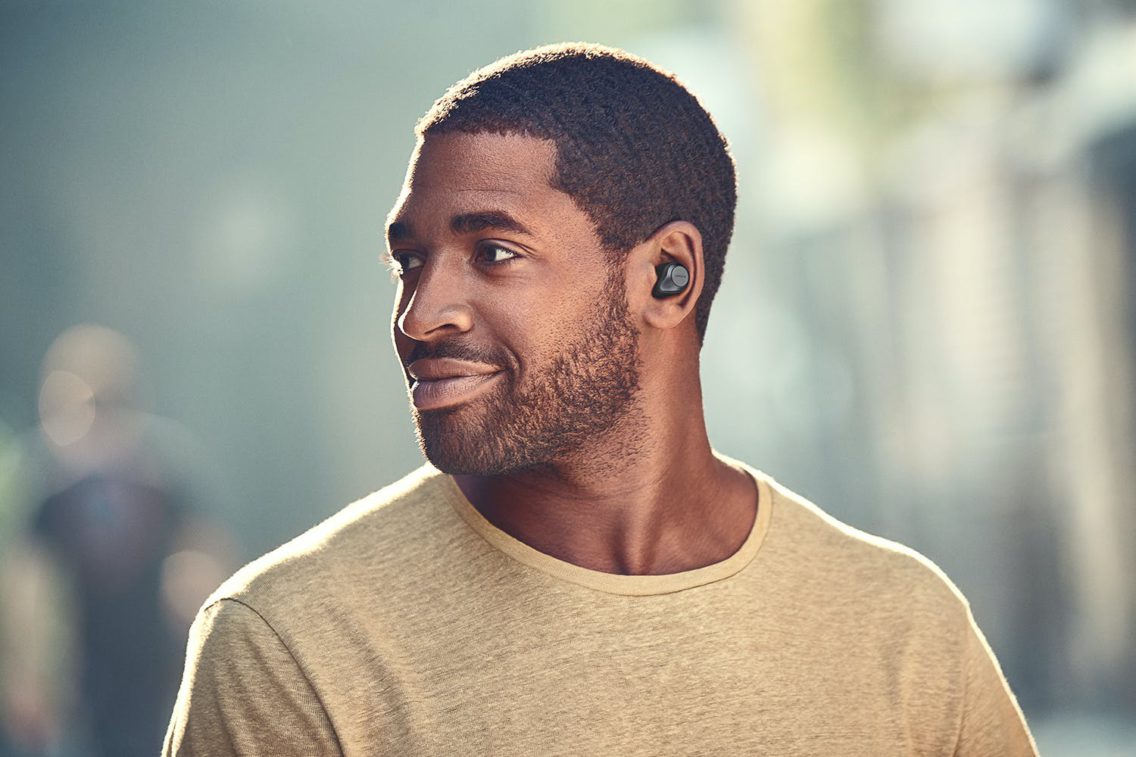 If you want top-drawer BT, ANC, earphones, then Jabra Elite 85t and its superseded Elite 75t must be on your shopping list.

Jabra joins Sennheiser in eschewing the closed earphone design of most ANC ‘pods’ and their resultant narrow sound stage. Jabra Elite 85t use a semi-open design with a wider stage. For me, I will take sound quality over ‘pressurised’ ANC any day.

I also mentioned last year’s flagship, the Jabra Elite 75t (review here 9.2/10). It received a firmware update in September 2020 that unlocked the Qualcomm TWS/ANC features, making them worthy competitors to the Jabra Elite 85t. As a bonus, we will test and postscript the Jabra 75t with its new firmware and give you a fair comparison.

Let’s start with the basic specs

I have worn these extensively over the past month, and they are a joy – no undue ear-canal pressure. At no stage did I feel they would fall out.

Because ANC relies on effective noise isolation, we issue the standard warning – please ensure you use the correct size of silicon ear gel tips – small, medium or large to help block noise.

It has an 11-stage adjustment, each offering an extra 3dB attenuation. From what I read, it is around three levels over Bose’s adjustments.

By default, the ANC focuses on higher frequency noises like passenger voices. The semi-open design tends to let in lower, bass-heavy noise like a plane taking off. As we cannot fly (easily), I tried these on several rail commutes, and after adjusting the ANC level, it effectively blocked noise to Bose levels.

You can also adjust for HearThrough and everything in between.

It has six mics (three on each bud) and does a terrific job in reducing outside noise (like wind) and two beamform to your voice. Callers commented on the clarity even though I was in a very noisy railway station.

Sidetone (hear your voice via the earphones) is probably the best I have used.

Battery – at least 4 hours per charge

The case is Qi wireless as well as USB-C. As an avoid Qi user, I would not buy just a cable charge case.

Jabra claims 5.5hrs with ANC, and again these are lab figures. Over the month, we averaged between 4 and 4.5 hours at 75%. If you don’t use ANC, you can add a few more hours.

Charging is from any USB-A 5V/1A/5W charger or, as its USB-C, any PD charger (although it does not fast charge).

You can get one hour use on 15 minutes charge.

It uses BT 5.1, so it can have two 5.1 host devices connect. Codecs are SBS and AAC. We could not drive them with Qualcomm’s aptX, which is strange because it uses Qualcomm TWS chips. In any case, BT sound quality is commensurate with the earphone’s capabilities.

These are 7g – light and comfortable. It has haptic clicky controls (excellent). IPX4 means sweat-resistant – not waterproof. But most of all, the two-year warranty is class-leading.

How does it sound? Awesome for music

These have 12mm drivers – about twice the usual size – allowing more music subtleties to come through.

In the default mode (no app), it is bass-forward with a flattish response (good) to about 10kHz and then a reasonably fast decline. This is warm – not quite sweet – and it is good for music. There is a lack of strong treble that can make vocal and instrumentals a little flat.

(opens in a new tab)

But you have the Jabra Sound+ app

First, connect the buds via BT to the smartphone. Then fire up the Jabra Sound+ app.

This is where Jabra is different from most. It can run a hearing test on both ears to tailor a sound profile for you. It takes a few minutes and requires you to tap when you hear a tone – like a hearing aid test. Your profile then helps to process music to reinforce any hearing weaknesses.

But it does not stop there – next is ‘my fit’ that tests sound isolation – it will tell you if your ear tips fit well.

The  ANC has a slider for 11 levels, and each blocks a broader range of frequencies. It also has pre-sets – My moments for about 50% ANC, Commute that switches ANC off and enables hear through and Focus.

I found the smooth EQ pre-set best for most music genres. You can also alter pre-sets.

The app has pre-sets for different noises – pink, white, ventilation fan, waterfall etc. or sounds – ocean waves, rainy day, songbirds etc. that you can use to get to sleep.

The semi-open design widens the sound stage a little, so some sound feels it is coming from outside your head.

All up, the app adds considerable value to the earphones. Once you use it, you will be disinclined to go back to lesser apps.

The Elite 75t (review here) was one of my favourites in late 2019, scoring 9.2/10. Since then, a firmware update unlocked Qualcomm’s on-chip ANC.

There are two primary differences. The Qualcomm ANC is essentially on or off (versus 11 bands), although you can tune it in the app. And the volume is not as loud. We measured 48dB (about 70dB in speaker equivalent versus 80dB).

In all other respects, it uses the advanced Jabra Sound+ app, including age/gender ear testing.

Would I buy them over the 85t? It was my favourite at the time and is now $80 cheaper, so it is tempting. But no – the 85t have advanced and outclass the 75th in every way.

Jabra is not a name you automatically look for but, in this class, it should be where you start. The app is incredible, and the hearing profile customisation is almost unique. The Jabra Elite 85t is a premium product. I really like the move to semi-open – nowhere near as claustrophobic as closed-ear can be and the better sound stage.

Jabra Elite 85t
If you are after a superior BT, ANC, TWS set of earphones the Jabra 85t must be on your shopping list
Features
9.5
Value for money
9.5
Performance
9.5
Ease of use
9.5
Design
9.5
Positives
Great sound and the EQ can change the dynamics
Excellent ANC without compromising music quality
Comoarable battery life to all in this segment
Qi and USB-C charge case
BT 5.1 multipoint to two hosts
Excellent sidetone for handsfree voice
Spare ear tips avaiable from Jabra
Negatives
Only the right bud can be used for mono
9.5