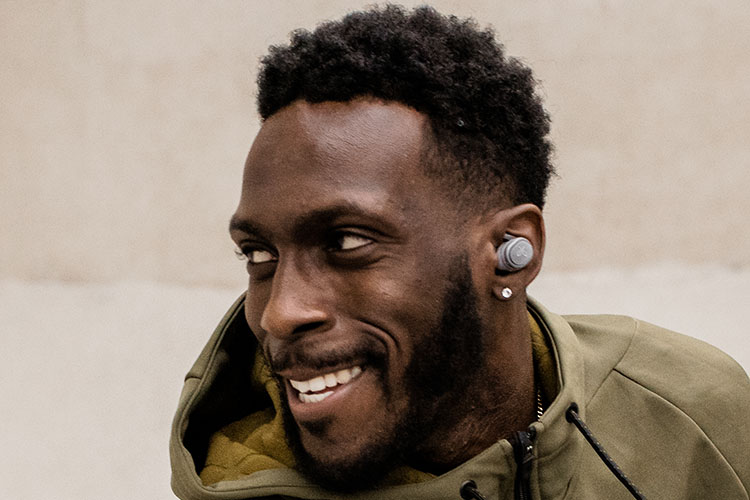 When I reviewed the original Jaybird Run earphones last year, I was very impressed. My only problem with them was that the control buttons were too strongly sprung, making it uncomfortable to use them. Now they’ve been updated to the Jaybird Run XT earphones. These, like the originals, are true wireless models.

“True wireless” means two buds which communicate with each other wirelessly. One of them (the right one) connects to your phone and passes the music and control signals through to the other.

The Jaybird Run XT earphones come with a battery case. When not in use you put them in that, and it charges them up. The buds themselves are rated to last four hours, while there are two more full charges in the case. So, you can be away from a power point for up to twelve hours.

The buds are IPX7 rated, which means that they’re quite capable of coping with a bit of sweat. They are aimed at sports users.

Also of help in that regard is the generous collection of tips and wings that are supplied with them. I found the largest of the three tips provided a good seal in my ears. Both the middle-sized and largest wings worked, but the latter felt more secure. They are rubber-ish protrusions that help lock the buds into your ears by almost clipping under whorls in your ears.

I have never used any earbuds that felt more securely locked in place, while remaining absolutely comfortable. The ergonomics are excellent. The button clicks have been lightened, too, so my complaint about the earlier model no longer applies. The buttons worked effectively and reliably. There’s only one button per side, so there are a limited number of controls. With presses, double presses and holds on the right earbud you can play/pause, skip forwards, turn the buds on or off, and invoke pairing. The left one is for telling Google Assistant or Siri to listen for your words, and also to switch the bud(s) on or off. You control volume with your phone.

Jaybird is one of those companies that provides an app for your phone – Android or Siri – which can enhance the function of the buds. The main function of the app is to allow you to tailor the EQ of the buds to better suit your tastes. As we’ll see below, I couldn’t use the app for this function because the earphones stopped producing any sound when I switched to the app.

One other important function is for tracking and locating your earbuds if you’re misplaced them.

The Jaybird Run XT earphones do not appear to support any of the higher quality stereo audio codecs, just the standard Bluetooth SBC codec. So reported a Google Pixel phone.

There were some quirks with these earbuds that I found quite disconcerting.

First, Jaybird Run XT earphones were oddly slow to respond to a change in volume level. That is, I’d tap the up volume on my phone and nothing would happen. And then maybe a second later the volume would go up. I found myself tapping several times, and then a moment later being blasted as I’d overshot the desired volume.

Second, I couldn’t use the app to tailor the sound. Oh, the app worked. It found the buds and it reported on their status. Indeed, by default it put up a notification on the “always on” display of the Google Pixel 3 XL I was using during this review. That notification showed battery status for both buds.

But if I was playing music from an app – USB Audio Pro, Bubble uPnP or Spotify – and switched over to the Jaybird app, the earbuds would go silent. But the indicator across the bottom of the Jaybird app would still show its little sound bars bouncing up and down as though the music was playing. When I jumped back to the player app, they were still silent until I tapped pause then play. Then the music would resume.

Endeavouring to fix that, I rebooted the phone. Same problem, except when I returned to the music app and tapped play/pause, only the right bud would resume. The left remained silent. I could then tap the left bud to invoke Google Assistant, then the right bud and that would return things to normal.

Thirdly, the Jaybird Run XT earphones responded to notifications weirdly. Normally when I’m listening to a podcast or some music using Bluetooth headphones and an email comes in, the music/voice will pause for an instant, the notification ding will sound, and then the program will continue. With these ones, the music/voice would ramp down in level to zero – while still apparently playing – then after a couple of seconds it would ramp back up to normal level. I’d have missed a phrase or two of the podcast. There would be no notification ding.

Fourthly, every so often the buds would just jam up completely. Music would stop and they’d become unresponsive. I could hold down their buttons for many seconds and nothing would happen. They’d have to go back into the charge case – only a few seconds were needed – to reset them. Then they’d work again.

That wasn’t too much of a problem, except for that time when I knew I’d be out for only a couple of hours, so I didn’t bother to take the case with me.

This was not a one-off. Over a couple of weeks it happened at least half a dozen times.

Finally, the buds worked, um, differently to other Bluetooth buds and headphones. For example, I use the Podcast Addict app to feed my, well, you know. One of the things I like about this is its easily editable playlist. When I start a new podcast playing, it will append itself to the bottom of the current playlist. I can then just slide it up to the top. When it ends, the next item will play.

Unless you’re using the Jaybird Run XT earphones. Podcasts would just stop playing several seconds before their end, the next podcast would queue up ready, but playback would pause. This mostly seemed to happen when I’d edited the playlist. It was also the time when the buds would freeze and become unresponsive.

I should note that prior to writing the above few paragraphs, I fired up the Jaybird app and connected it to the buds in the hope that there may have been a firmware upgrade that might resolve these matters. There wasn’t.

All that stuff above is a pity, because in other ways the Jaybird RUN XT earphones are fine. There is the excellent seal and the way that they stay in place in my ears. And even though I would have liked to have been able to use the EQ feature in the app to tweak the sound, it was pretty decent with the default setting.

With my main earbud listening fare – podcasts – voices were balanced, clear, easy to understand and, most importantly, avoided any irritating attributes, such as sibilance.

Also important: they had sufficient gain to produce satisfying levels, even with shows recorded at a low level. Likewise for music.

The tonal balance with music was a little biased towards the midrange rather than presenting a traditional “high fidelity” feel to the music. There were reasonably good bass levels, although not real extension to the extremes. For example, as I type this paragraph, I have the original, famous, Telarc recording of Tchaikovsky’s 1812 Overture playing. There’s the temptation to focus on the massive cannon at the climax, but more instructive are the bass drum thumps earlier in the piece. These are presented with these earphones fairly satisfyingly, but I felt that most of the energy I was getting was from second and higher harmonics, not the fundamental.

Meanwhile, the massed strings were smooth, but a little pinched in scope, not quite as open as I expect with (to be fair) my far more expensive reference headphones.

Changing genres significantly, the track “Southbound Pachyderm” from Tales from the Punchbowl by Primus was lacking a little of the compelling bass drive from the kick drum. It was there, but a little recessed, lacking the weight provided by a system with better bass performance. The cymbals, too, seemed to clatter a little, rather than ring out, as though they were missing some of their upper harmonics.

Now, the funny thing is that all the buggy stuff mentioned is likely firmware related. So I shall ask the distributor to let me know if any new firmware is issued addressing these issues. I will report back if there is any improvement.

To be clear, I was not using a fly-by-night phone for this review. I used a new Google Pixel 3 XL. Anyway, Jaybird’s website for the Jaybird Run XT earphones is here.