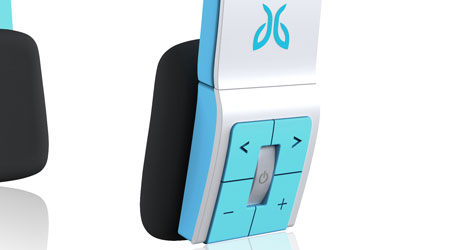 Sporting a distinctly ‘80s design ethos but combining state-of-the-art Bluetooth wireless technology, the JayBird SB2 Sportsband Bluetooth headphones are built to stand the rigours of working out while dispensing with the annoying trailing wires that usually encumber your exercise sessions.

Charge the headphones for a couple of hours by plugging them into a USB port, then when it’s ready hold down the power button for six seconds: it’ll turn on first, with a blue flashing light, then flash alternately red and blue to show it’s in pairing mode. All you do is navigate to the Bluetooth settings on your phone and a new device, named ‘SB2’ should show up. When it does, the phone and headset pair automatically, or at least did in my case on an iPhone 4.

The JayBird SB2 Fits snugly on my head, with a short slider adjustment and rubber underneath the headband, making for a comfortable and secure fit. Putting it to the test, there was no trouble walking on a treadmill at a 6kph, the headphones remaining in place. Upping the pace to a gentle run at 12kph, and in spite of my running with the gait of a three-legged rhino, the headband stoically held fast.

Adjustment of the tunes works by pressing one of the four rubberized buttons on the right-hand side of the headphones, over the ear. A central button in this panel acts as power switch, pairing switch, for answering calls and playing music. Manipulating these buttons is a little weird – it’s handy to use the centre power button as a locator, to orient your fingers, then you move slightly up and to the left to go back a track, same but to the right to go forward and use the same technique to press the lower buttons for volume.  Track skip and volume are the only controls you have on the Jaybirds, so you need to select your album, playlist or whatever on the phone before you jump on the treadmill. To pause the music – you guessed it – it’s a push of that central button again.

Moving over to the weights, the SB2 coped with everything from dumbbell flyes and barbell curls right through to the explosive swinging motion of overhead kettlebell swings. A quick pat around my head confirmed that the headband hadn’t slipped an inch, despite a fair bit of sweat. Closer inspection at the end of several minutes of jumping rope – also without slippage – revealed that the foam earpieces were wet and in need of an airing. There are 2 extra sets of foam ear pieces in the box, if you need a replacement pair quickly and, in any case, Jaybird tell us you can wash them with a damp cloth.

Functional range for the Bluetooth appeared to be a few metres at best – moving more than three or four metres away from the phone while playing back music and putting a couple of walls between us resulted in patchy playback; good on the whole, but dropping out every 30 seconds or so. So it seems it’s fine to leave your phone in the house and work out in the garage next door, say, or in another neighbouring room, but it’s not a good idea to stray too far. For most, however, it’s a moot point as they’re likely to be carrying the phone or Bluetooth device with them as they jog, cycle, or whatever.

Fortuitously, a couple of incoming calls while I was on the treadmill allowed me to test the phone compatibility of the Jaybird SB2 Sportsband and also reveal a shortcoming. While the headset faded the music out and allowed the incoming call with a single press of the centre button, the built-in 4mm microphone apparently made it very difficult for the caller to hear me, reporting that my voice sounded very distant.

For a pair of great-sounding headphones that completely dismiss the need for wires and stay on your head while you’re jumping up and down, the Jaybird SB2 Sportsband seems unbeatable.  They’re classy, in a retro ‘80s way, satisfying a thirst for fashion statements with nine available colours, and cope admirably with relaying your digital music across the ether. Under rigorous testing the SB2s never skipped a beat nor fell to the ground, making them ideal for gym-goers who want beats without bother.