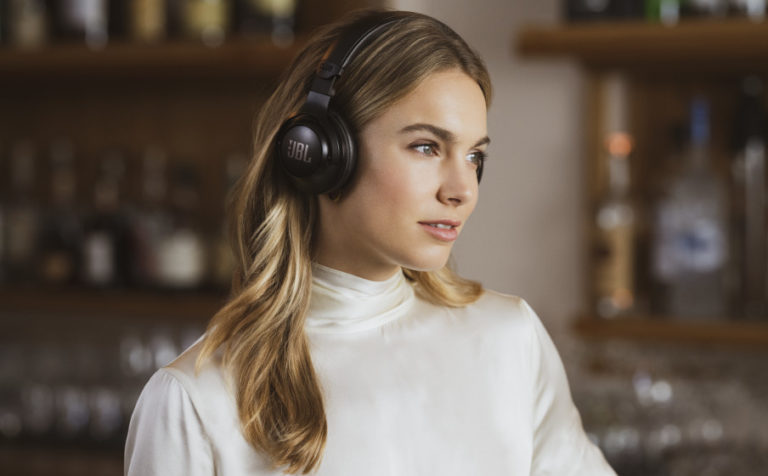 I don’t think I’ve look at any of JBL’s “CLUB” range of headphones before. Well, there’s no better time to start than when a new model is released. The JBL CLUB 700BT Bluetooth headphones are the entry level of the three CLUB models.

The JBL CLUB 700BT headphones are straightforward on-ear models. Perhaps their biggest selling point is the enormous battery life: 50 hours. They use a USB Type-C for charging and fully charge in less than two hours.

Inside are 40mm dynamic drivers. JBL rates their frequency response at 16 hertz to 40,000 hertz – that’s using the headphones passively via a wired connection. The cable is included (as is a charge cable).

It’s worth pausing on this passive operation for a moment. “Passive” means “switched off”. The amplifier in the connected device drives the headphones like they were old-fashioned wired models. When I did plug them in, the internal amplifier switched off and stayed off. Use a wired connection and you aren’t using their own amplifier.

I don’t normally pay much attention to this mode in Bluetooth headphones, but some figures intrigued me. JBL rates the maximum output of the headphones at 93dB, which I presume means using its internal amplifier.

And it rates the sensitivity of the headphones at 100dB for 1mW input. And the maximum power handling in passive mode at 1,000mW. Assuming linearity (not a safe assumption at these levels!), that would equate to a 130-decibel output!

So, of course, I had a comparative listen: internal power vs external. We’ll get back to that.

The right earcup has volume up and down buttons with a play/pause/answer/hang up/reject call/invoke Siri or Bixby button between them.

Only Siri and Bixby (Samsung’s smart system)? No, there’s also Google Assistant and Alexa, but they (you choose which) are invoked by pressing on the face of the left earcup. At least, that’s what’s supposed to happen. I spent twenty minutes fiddling with settings, and the Google Assistant control panel indicated that all was hunky dory, but I could not get Google Assistant to work with these headphones. Every time I pressed the button, the headphones said that Google Assistant was not connected … well I’ll be. I just pressed the button as I was writing that sentence in order to get the exact message, and now it is connected! Along the way, I checked out Alexa connectivity, and that worked fine.

Anyway, further down on the right earcup is a button to pump up the bass.

The left earcup carries a power on/off button – you have to hold it for a too-long three seconds to do either – a Bluetooth button and a final button for switching between “Talk Through” and “Ambient Aware” mode. Note, there is no active noise cancelling function.

Also provided with the JBL CLUB 700BT headphones is a soft carry case. The earcups can swivel a little, but not into a flat posture. But they can fold inwards to reduce the headphones’ size, making a fairly compact package to carry.

Bluetooth 5.0 is used, but apparently no codecs other than vanilla SBC.

One worry I always have with on-ear headphones is whether they will become uncomfortable over time, since they’re pressing down on my ears, rather than surrounding them and are thus supported by my skull.

JBL seems to have settled a good tightness. They were firm enough not to dislodge in normal use, but not so tight as to cause discomfort.

I did make the mistake one evening of heading down to the gymnasium wearing these headphones instead of earbuds. They continued to sound great, of course, except it was hard to keep them on my head while doing crunches. No foul. The JBL CLUB 700BT headphones aren’t designed for that operation.

Before getting into proper listening, I tried the bass boost button to see what it did. Please, do yourself a favour: foreswear its use. At least with anything recorded in the last couple of decades. Such recordings aren’t bass-deficient, and all that button on the headphones does is boost the bass to a mushy, muddying level. After sampling it, I just kept my finger quite well away from that button.

Without that function engaged, the JBL CLUB 700BT headphones sound really quite good, especially for the price. By default, they deliver a sound with a neutral tonal balance, but one that’s nicely dynamic and detailed. That was pretty consistent across genres. The Billie Eilish album, for example, contrasted her frequently sweet tones against the powerful, deep bass line, while keeping all things clear. The 1979 album Sky – the John Williams-led classical crossover work – was quite luscious, with a detailed delivery of all the instruments, and good driving rhythm in the drum work.

There’s an app of course. The JBL app lets you do some free-form EQ adjustment or match the sound signature to that preferred by one of several DJs. I played with that a little and came away with the impression that some DJs have strange sound tastes. The EQ function was quite effective and should allow you to change things to precisely how you like it. Oddly, while the “Piano” EQ preset was shown as a flat line, it sounded very different to having EQ off. Perhaps that’s an admission that the natural response of the headphone drivers isn’t quite flat. I preferred having it off.

As I write this bit, I’m listening to Rage Against the Machine’s debut self-titled album. Initially it was streaming to my phone from TIDAL. But as the volume approached the maximum, things got a little sloppy, as though a touch of dynamic compression had set it. And when I hit the maximum gain, I yearned for a few more decibels.

So it was time to try the wired connection. I plugged it into a good quality DAC/headphone amplifier. Into the 32 ohms of these headphones it ought to be good for around 30mW. That works out to around 115dB.

It was quite the difference. The sloppiness was gone. Things were tight again even well beyond the apparent volume level when used via Bluetooth. The bass end was significantly tighter and seemed to extend an octave lower.

Of course, I could wind the volume up well beyond that available from the built-in amplifier.

Truth is, the JBL CLUB 700BT headphones, used passively, can stand up quite well against many passive headphones of a similar price.

A little anecdote which gives a sense of how far the connectivity on these headphones reach. I was in the kitchen pottering around, listening to a podcast with a pair of buds in my ears. Unexpectedly, the podcast stopped for no apparent reason. After checking a couple of obvious things, I looked at the Bluetooth connection on my phone. It wasn’t connected to the buds anymore, but to the JBL CLUB 700BT headphones.

I thought that the phone had somehow become confused about what was connected. I switched Bluetooth off and then on again and restarted the buds as well. The result: the phone was still seemingly connected to the JBL headphones.

But they were out in my office, three walls – one of which has metal-covered insulation – and twenty metres away. I went out and yes, the headphones were in the office, switched on, high jacking the Bluetooth connection. Impressive.

More formally, using my usual walking-away methodology, the headphones held a perfect connection with the phone out to a solid 45 metres. Again, impressive.

The battery life is incredible. I used the JBL CLUB 700BT headphones as my main headphones for about three weeks and charged them just once in that period. Earlier this afternoon I needed to walk down to my local shops – a twenty-minute round trip, plus whatever time I spent there – and I noticed that there was only a sliver of battery life left showing on the indicator on my phone. I figured there was a chance the battery might expire, so I tucked a pair of earbuds into my pocket, just in case.

I walked to the shop, spent twenty minutes there, walked back and spent an hour making dinner before the headphones sounded its switch-off tone and shut down. Exceptional performance.

That said, an audible warning of some sort perhaps half and hour before expiry, would be useful.

And speaking of audible tones. The headphones let you know what’s going on using tones. You’ll learn over time what each means. But there was one I didn’t like. When you’re turning up the volume, a tone sounds when you’ve hit the maximum. It made me jump several times because it was very much louder than the music. To avoid that, it was best to have the phone’s volume turned up to maximum and then just control the level with the buttons on the headphone. That kept that tone down – relatively – to the level of the programme material.

If you like good quality sound, aren’t too fussed about active noise cancellation, and really value the convenience of a long battery life and a superbly stable connection, check out the JBL CLUB 700BT Bluetooth headphones.

Check out our coverage of other JBL products here.