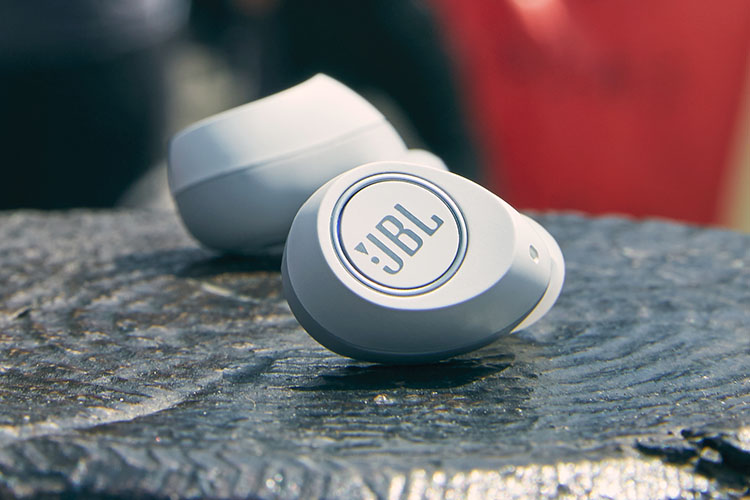 JBL’s new “true wireless” earbuds are the JBL Free X earphones. What sets them apart from the competition is that with their charge case, these earphones give you up to 24 hours of freedom away from power.

It’s kind of surprising that others aren’t doing this. Yes, there are lots of wireless earbuds. They are earphones where the two buds connect wirelessly. And, yes, it’s standard that these come in a case with a built-in battery that charges them up.

But why is the built-in battery typically so small? Cost savings? Anyway, most will charge up the buds three more times, giving perhaps nine or twelve hours of total playback. JBL has designed this system with a four-hour battery life for the buds (each has an 85mAh battery built in) and five additional charges in the case (it has a 1,500mAh battery). Total? Up to 24 hours.

The reality? I don’t know. But it’s a long time.

I’ve been using these buds for a couple of weeks, typically listening for about three hours a day – and I’ve charged up the case twice in that time. In each case, according to the built-in battery meter, it has still been well above fifty per cent in capacity.

I know, I know, I should have run it down, assiduously timing every session with my stopwatch. But remember, your usage will vary from mine, which will vary from JBL’s. Battery life depends on things a number of things, not least the volume at which you play back music. And the degree to which you’re using the hands-free, and not just listening.

What I can say is that these earphones have easily the longest buds plus case battery life of the many that I’ve reviewed.

A note, before I go on, about naming. If you like what you read in this review you might decided to go to a store to buy the JBL Free X buds, or you might decide to go online to the Australian JBL store to buy them there. But you then might be confused. I’ve been calling these the JBL Free X earphones. That’s what the original press release called them. That’s what they’re shown as on the JBL website.

But if you go to a bricks and mortar store, you’ll probably search for them in vain. Because on the box they’re simply called JBL Free, not Free X. Likewise on the specification sheet. I mention this because as far as I can tell, they are all one and the same product.

Well, two really, because they’re available in black and white.

As I’ve suggested, the JBL Free X earbuds conform to the conventions of these things. There are two buds and a case. Open up the sprung lid of the case and you’ll see two sculpted spaces in which the buds lodge. They snap into place magnetically, their charge terminals aligned with two gold-plated prongs in each of those spaces. The lid, when closed, holds them in place.

As I say, that’s the convention. But there are a few extras, even beyond the number of charges available. When you pop the buds into place, a ring around the control button on each glows. Because of that, you know that the connection has been made and that they are charging.

Furthermore, there are four small LEDs on the leading edge of the case. These indicate the case’s current state of charge. That state-of-charge indicator is both very useful and very unusual.

The charge port uses a Micro-B USB socket and it’s covered by a rubber plug. I don’t think the charge case is waterproof rated, but I guess that this would offer you a chance if you were to accidently drop it in some water and were to quickly retrieve it. The buds themselves are IPX5 rated. JBL says that they’re fine in the rain.

The lid is translucent so that you can see what all these lights are doing, except under strong sunlight. That washes out the relatively feeble glow of the indicator lights. The charge case weighs 87.8 grams when it’s empty. It’s a touch under 34mm thick when closed and sits comfortably in a pocket.

Each bud weighs 7.2 grams, according to my scales. That’s with the largest of the three sizes of silicon tips and the smaller of the two “gel sleeves”. I confess, I’m not one hundred per cent certain of the purpose of these gel sleeves. They slip over the hard plastic bodies of the buds. They may be intended to add a bit of friction to help the buds lock into the whorls of one’s ears.

The JBL Free X buds use 5.6mm dynamic drivers. JBL rates their frequency response at 10 to 22,000 hertz. They use Bluetooth version 4.2 with the usual Bluetooth protocols. JBL doesn’t mention the use of any advanced codecs and my Pixel 2 phone doesn’t indicate any, so we can safely assume that music is delivered via the standard SBC codec.

The face of each of the buds is a large button. The one on the left bud is for skipping tracks forward (one press) or backwards (two presses). The one on the right is for:

As is usually the case with earbuds, the JBL Free X buds switch on automatically when you take them from the charge case and switch off again when you put them back. You can manually switch them on and off with a 5 second press.

On a couple of occasions, I must have failed to seat one or other of the buds properly because it failed to switch on again. I learned to check that the connection light was properly lit before closing the lid.

I soon learned the sequence of beeps – there is no spoken feedback – as the JBL Free X buds connected with each other and the phone.

Connection with the phone was quite good. Using my usual front yard test, I found that I could easily go ten metres from the phone while retaining a solid connection. Much beyond that and turning my head so that the left earbud was pointed in the direction of the phone caused the signal to drop out.

Very occasionally there’d be a dropout with the JBL Free X earphones when I had my phone in my pocket, especially if I was carrying a plastic bag or other largish object near to it. Sometimes, appliances in the vicinity which generate significant electrical or magnetic fields could interfere with the buds. In particular, things got pretty dicky when I was cooking over my inductive hotplates, or when I switched off my wife’s hair straightener. Sometimes when things went awry, after reconnection there’d be a slight timing mismatch. I don’t think it was a phase reversal on one or the other, but a small group delay in one of the buds. That made the sound somewhat disembodied. Usually there’d be a brief hitch within a minute or two and normal in-sync sound would resume.

When you’re taking calls or using a voice assistant, the JBL Free X buds adopt a mono mode, with all sound coming only from the right bud. They go stereo again, or course, when they go back to music mode.

They did seem to offer a fairly extended upper range. There was plenty of detail in music, and good clarity in podcasts. There was also plenty of volume.

The mid and upper bass was well balanced with the rest of the range. Right now I’m listening to the closing track of Santana’s fourth album, Caravanserai. The frenetic percussion and flute is well represented, clear and coherent. The bass line is at the right level.

But this isn’t a particularly bass-strong recording. Which brought to mind Janis Joplin’s I Got Dem Ol’ Kozmic Blues Again Mama! The second track of the CD has a deep spurious noise about two minutes in, mostly a mixture of 50 hertz and 27.6 hertz. It comes across as a deep grunt … if your equipment reproduces it. The JBL Find X earphones did indeed reproduce it. They also delivered the music on this album with dynamism, all the bass in all its glory. It was an exciting delivery.

One of the best things about the JBL Free X earphones is the price. At just under $200, they are truly a bargain.