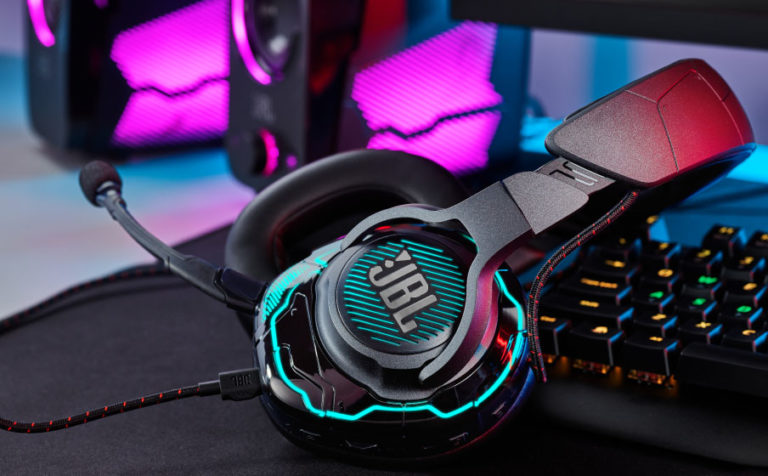 Quantum is JBL’s new range of gaming headsets. And the top of the line model is the JBL Quantum One. Priced at just short of $500, it ought to be pretty good to justify the cost. And, it turns out, it’s not pretty good. It’s actually pretty amazing.

About the JBL Quantum One

Since the JBL Quantum One is, after all, a gaming headset, it has an over-ear form for long-term comfort and a boom microphone protruding from the bottom of the left earcup. This is removable.

Inside the earcups are 50mm dynamic drivers. JBL doesn’t say much about them, but after a bit of listening, I quickly concluded that they are very much premium drivers. JBL does rate their frequency response at 20 hertz to 40,000 hertz. That high figure is kind of overkill, given that if you use the digital connection the headphones locked into a 16-bit, 48kHz mode, with a maximum high frequency response of something under 24,000 hertz.

There are two main feed cables provided with the headphones. One is USB, the other analogue. If you use a PC for your gaming, or a Mac or PS4 you can use the USB connection. Otherwise, the analogue one. The latter is straightforward, and will work with just about any device, both the microphone and headphones.

With the USB connection, the cable doesn’t go straight from headphones to source. At the headphone end the connection is USB Type-C, at the other end USB Type-A. In between is a pod with a large rotating control on it. At first glance you may think this is a volume control. It isn’t. It’s a balance control. It balances the sound between “game” and “chat”. Turn it to the left and “game” dominates while chat diminishes. The other way and the reverse happens. Windows computers maintain separate sound channels between regular audio playback (game, in this case) and “Communications Devices” (chat).

Setting up the JBL Quantum One headset

One other thing about Windows computers. If you use the JBL Quantum One headset with one, then you can install the JBL QuantumENGINE software, which exercises a lot of control over the headset, and expands its features. If you’re using some other source, no go. I imagine that it works with the other headsets in the Quantum lineup.

Now, setting up the headset involves no effort of all if you’re using a non-Windows source. Plug it in via USB or analogue, as appropriate, and get to it. (I couldn’t get the microphone to work with the analogue connection for a while. Until I realised that the inline switch was for muting the microphone.  I unmuted the microphone and all was fine. It also has a level control for audio playback.)

But if you’re going Windows, you have a wealth of options through the QuantumENGINE software. For example, you can configure the lighting – PC-only, again – by choosing colours, and different sets of colours to switch between.

I played with this for a while, and then decided not to use lighting. Why? Because having the lighting on actually introduced a low level of white noise into the audio feed. (By “low level”, I’d estimate something like -60dB or maybe -70dB. Not too intrusive, but as a hifi guy, not something I’d willingly tolerate. Switch off the lights and it goes away.)

Is personal calibration a good idea?

You can also adjust EQ, change the microphone settings and adjust Spatial Sound. I’ll be returning to that. But as part of Spatial Sound, if you choose the JBL QuantumSPHERE 360 mode, you can calibrate the headphones. You place a tiny separate microphone, included with the headset, in your left ear and plug it into the boom microphone input of the headset. When you click the “Start Calibration” button, the software runs a couple of frequency sweeps. Repeat for the right ear and then the software calculates a new EQ curve, apparently based on the characteristics of your own ears.

How does it work? Does it measure otoacoustic emissions like Nuraphone headphones? Or employ some other process? I don’t know.

Still, it’s worth doing. It only take a minute or two, and you can switch the calibration results on and off and decide whether you’re going to use them. I ran the calibration. I listened for a couple of minutes and then switched it off. It made the music excessively bright and harsh. This kind of thing is typically based on the assumption that changes in your hearing over the years need correction. This is fundamentally misconceived. Yes, they do need correction. And in fact they do receive correction: by the audio processing systems in your brain. External correction clashes with that internal correction and makes things sound poor.

Listening with the JBL Quantum One headset

I mostly listened to stereo music with this headset, adding in some surround-sound test content and fun shoot-em-up movie scenes. Remember, gaming headsets aren’t optimised for music, although I maintain truly accurate headphones will be equally good with music, movies and games.

So, how did the JBL Quantum One headset sound with music? Bloody marvellous. Somewhat to my surprise.  Apparently JBL agrees with my approach. Used as headphones, the JBL Quantum One produce a near-to-audiophile performance. The sound was exciting, involving, wide-ranging and dynamic.

I started with some Billie Eilish. Her bass accompaniment sounds fairly good on a wide range of equipment, but most of the time the bottom octave of bass is missing. Not so with this headset. It was there, powerful and extended. Her voice was, in turn, sweet at those moments in which sweetness was intended. And otherwise smooth and balanced in tone. Clarity was excellent.

So I moved over to something older and often more difficult, especially for headphones. Dire Strait’s fourth album, Love Over Gold is truly a masterpiece, but Knofler’s taste does seem to run to a rather strong treble. The JBL Quantum One headset clearly conveyed the true character of the album, but held back the treble nicely. Controlled it so that while I could tell it was somewhat emphasised, it wasn’t wearing on the ear. The famous (in my mind, at least) bite of the guitar at 4:30 into “Private Investigations” was delivered in full, but with more body than usual.

Again and again I kept thinking: gaming headsets aren’t supposed to sound like this.

Speaking with the JBL Quantum One headset

It wasn’t just the headphone section: the microphone was quality stuff as well. I experimented a bit with positioning. The microphone stalk, while only 75mm or so in length, is flexible so you can get it up fairly close to your mouth or have it some distance away. My voice sounded very natural in tonal balance using this microphone, especially when it was pushed in quite close to my mouth.

Even up that close, deep plosive thumps were quite limited and not very strong. I tried with the microphone further away at perhaps 50mm, but this thinned my voice, removing the lower frequencies from it. Clearly there was a proximity effect. You can tune how you’re going to sound.

When used with a PC you have access to the “Spatial Sound” offered by these headphones and the JBL QuantumEngine software. There are three settings available. Off means that the headset delivers sound just like a standard set of stereo headphones. DTS Headphone X adds a surround element, while JBL QuantumSPHERE 360 processing adds even more.

I started by simply playing the “Test” sound in the Windows Speaker Properties box (it’s in the Advanced tab). This is three chimes descending in frequency in the left channel, then three ascending in the right. With “Spatial Sound” off – and remember, this will be how things sound when the headphones are used with every platform other than a PC – it sounded just as it ought to. The first set of tones were firmly planted in my left ear, the second in the right. So what happens with Spatial Sound? I flicked on the JBL system first, and wow, what a change. The left tone was no longer just in my left ear. It was raised in height. That is, it seemed to come from somewhat above the level of my ears, still to the left but not quite so wide. Likewise for the right.

DTS Headphone X was kind of similar, but a little less aggressive.

When I switched to music, it seemed to me that DTS Headphone X was kinder and more listenable than the JBL system. But having it off completely was quite viable. The sound was fuller and, dare I say it, more realistic than regular mode.

You can play these headphones in 7.1 channel mode. The JBL software takes you to a video to demonstrate how to make the appropriate settings in Windows. I played around with the software’s own Channel ID feature and my own 5.1 channel surround sound clips. I found the locations of sound around the back of my head a little vague, but there was a definite sense of surround sound. The JBL system was more effective in this regard than DTS. All settings delivered the LFE channel properly.

One final feature of the QuantumSPHERE 360 mode is head tracking. That is, the headset can track your head movements and adjust the “direction” of the sound to match.

Imagine: in the real world, if someone’s talking directly in front of you and you move your head to the left, that person’s voice will move to the right in your sound field. You can switch that effect on in the JBL Quantum One headphones. It even worked with stereo music, the sound moving across the acoustic stage as moved my head from one side to the other.

Gadgetguy’s Take – The JBL Quantum One gaming headset is brilliant

I did some A-B tests with another gaming headset from a different reputable brand, albeit a set priced at about a third of the cost of the JBL set. There was no doubt: the JBL sounded hugely better on voice, on movies and on music. And when I recorded my voice, it also sounded far more realistic. Finally, the JBL Quantum One headset was very comfortable. I was happy to leave it on my head for many hours.