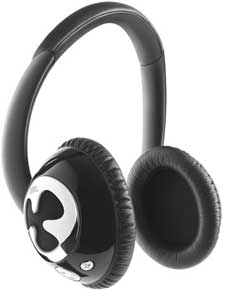 Bluetooth was created to be the ultimate flexible short-range wireless system, applied to dozens of different devices. While mobile phones have dominated the technology, other companies are finally coming around to the benefits of Bluetooth, and JBL is right in there. By using Bluetooth, these headphones don’t just work near the connected iPod, they even work at the opposite end of the house!

Naturally the first thing you notice is the Bluetooth dongle. This attaches to the docking port on the bottom of your iPod – it’s only compatible with iPods that have this docking port. The first and second generation iPod, as well as other MP3 players, will miss out on the Bluetooth and have to use a regular 1.75 metre audio cable which connects via the unit’s USB port.

There are controls for the iPod on the right ear cup, allowing you to set the volume, navigate through menus, and of course play, pause, fast-forward and rewind.

The package is very generous: you get a solid travel case (it’s quite large though, nearly 30 cm square) filled with extra cables, a recharge pack with international adapters, and a stereo phono jack adapter, along with a USB cable.

The headband is adjustable and despite having an internal power source and wireless gear, only tips the scales at 212 grams.

Audio performance is solid, but the high end is not as crisp as you might expect from a set of regular headphones at this price point. The construction is also not as heavy-duty, but it is reasonable to expect that Bluetooth attracts a premium.

The wireless connectivity works exceptionally well. Just plug the dongle into the iPod, push the power button on the headphones, and within a few seconds the devices are paired and your music starts to pump. If you pull out the dongle and replace it, the connection may be lost and it can take a bit of a fiddle to re-establish the link, but switching the headphones off and then on again fixes this.

Questions surround the usefulness of replicating iPod controls on the headphones when the device is right there to hand, but the controls are useful if you leave the room without the iPod. Once again though, since the iPod is so portable, why do we need a wireless headphone set for it at all?

You also can’t dock the iPod to recharge and use these headphones at the same time unless you go for the cord option. But JBL does other excellent non-Bluetooth headphones, which give you better sound performance at the same price-point.

Wireless headphones for a slim and portable device might sound counter-intuitive, but eliminating wires does improve your iPod experience, and the sound quality is far superior to all but very high-end headphones.

It’s a shame the Bluetooth dongle hasn’t been designed in such a way as to allow the iPod to be docked while in use, because then these headphones would come into their own – allowing the iPod to charge while you wander about the house grooving.

If you can stomach sacrificing some sound quality (in a per-dollar sense) then the 610s are an impressive bit of kit.