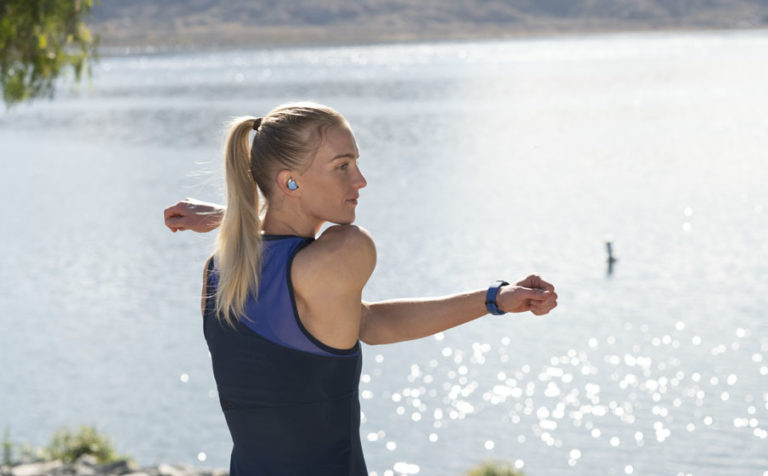 Of course, that means that they aren’t really the smallest earbuds on the market. They do tend to stick out of one’s ears a little more than some. But that doesn’t come at the cost of in-ear security. The buds are provided with wings which lock them firmly into the ear. There are three sizes of wings and three sizes of silicone tips provided. I found that – as usual – the largest tip size fitted my ears best, delivering the best seal for the bass passive noise rejection and the best bass. The middle-sized wings worked fine for me.

The batteries in each bud are 110mAh units while the charge case is rated at 850mAh. Ten minutes in the case gives a depleted set of buds an hour of playback time.

The case is quite large, too: a bit more than 75mm wide, 35mm tall and 25mm deep. The top flips up to reveal the nests for the two buds. Perhaps it was because I used the largest silicone tips, I found I sometimes had to press the buds firmly into place to make sure their electrical contacts were properly seated. And I found them a touch difficult to pull out, since the tip seemed to grip a little inside the case. I mastered removal in the end, but it was harder than necessary.

At the back of the JBL Reflect Flow case, near the hinge, is the charge port. This is Micro-B USB, unfortunately, rather than USB Type C. That just made it a bit more fiddly when plugging in the cable. A rather colourful charge cable is included. Underneath the charge port is a useful 4-segment LED to show you the case’s charge level.

I used these buds as my main portable earwear for several weeks, including during an overseas trip. (I used normal noise-cancelling over-ear headphones on the flight, of course.) That also included plenty of gym sessions and a lot of walking around.

I didn’t have to worry about sweat or getting them damp in the rain. The JBL Reflect Flow earphones are IPX7 rated, which means they can cope with squirts of water. Not once did they work their way out. The seal was excellent and remained so. And while sealed, noise isolation seemed to be more than usual.

So perhaps it’s just as well they have a “Talkthru” mode and an “Ambient Aware” mode. You press the single button on the left bud to cycle through those and normal mode. “Talkthru” mutes the program to something that’s barely audible and feeds the audio from the built-in microphones through to the drivers. That lets you hear what’s going on around you. The sound was surprisingly natural, albeit not perfectly so. “Ambient Aware” merely reduces the program level a little – perhaps six decibels or so – and again feeds in the outside sound. That’s good for wandering around city streets since you’re more likely to hear approaching vehicles.

With a double tap on the right earbud, you can invoke Google Assistant or Siri as appropriate.

I’m travelling as I write this review so I can’t use my usual routine for working out the reliable reception range. But I can nevertheless attest to the fact of a very reliable connection provided via Bluetooth 5.0. The conference room in which I’m sitting is full of human bodies and active electronic equipment, and within its confines I could get fifteen metres away with no interruptions.

Every so often the left bud failed to connect to my phone or the other bud when I removed it from the case. It was unclear why, and I’m uncertain as to whether I’d contributed to it by failing to seat it in the case properly. The solution was to pop it back in the case, make sure the red light came on to indicate that it was charging, then take it back out. After a second it would connect and normal service would resume. That was the only real operational wrinkle. I’d note that you can switch the buds off without having to put them in the case, so if there are problems and you don’t have the case handy, you can just switch them off and on again.

The JBL Reflect Flow buds don’t use a spoken voice to tell you what’s going on. Instead they just use various tones to indicate that they’re being switched on or off, and when they’re connecting to your phone.

The controls are one button on the back of each bud. They were a bit firmly sprung for my taste. That meant they sometimes had to be pressed firmly into my ears in order to do things like pause music. And applying a double tap to invoke Google Assistant became a hit-and-miss affair.

The JBL Reflect Flow earphones don’t use any of the higher-quality fancy codecs for transmitting the sound. It’s plain old SBC. But better codecs are wasted anyway unless the earphones can physically deliver good sound. Especially if, as is the case with these ones, they don’t have an app with EQ facilities.

But these JBL Reflect Flow earphones deliver very good sound without the need for EQ. They produced music with a very natural frequency balance. Across genres, the tone was excellent. Laura Marling’s opening sibilance on Once I Was an Eagle was conveyed by these earphones, but not emphasised at all. JBL seems to have tuned these buds with discretion and good judgement. The bass drum on the same track was full and resonant, while the higher-pitched drums danced around nicely in a near-three-dimensional space.

The soundtrack to Hamilton was handled well too, with good separation to the various voices. That was particularly important in the several tracks in which multiple voices are duelling. The bass lines on this album were delivered with decent authority and sense of good bass extension.

There was respectable transparency. It was easy to hear the slight microphone compression, saturation even, in the early 1970s Roberta Flack singing “Killing Me Softly With His Song”. But better-recorded 1970s material was delivered equally well. For example, as I’m typing, Bill Bruford’s drumming on Yes’ sone “Heart of Sunrise” is being faithfully carried by the JBL Reflect Flow earphones.

For a complete change of pace, I tried the track “Mariae Wiegenlied” from an album of beautifully recorded German Christmas songs called Cantate Domino. This track is simply a soprano singing, accompanied only by a pipe organ, and even that mostly the deep bass from the pedal. The voice – soprano vocals can be grating on poorly balanced speakers and headphones – was controlled and beautiful, while the depths of the pipes were plumbed extremely well by the JBL Reflect Flow earphones.