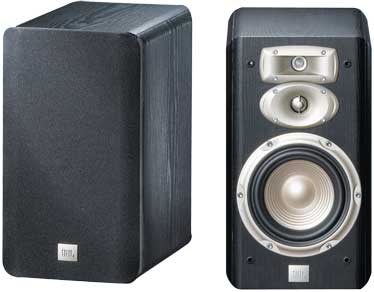 Most of the systems we deal with here have five, six or even seven loudspeakers, plus a subwoofer. But there remains a useful place in many homes for a high quality pair of bookshelf-sized loudspeakers. I say ‘bookshelf-sized’ because it is a rare loudspeaker indeed that actually sounds any good on a bookshelf. With the JBL Studio L830 speakers, you will get far better sound with them placed on dedicated stands than if you just whack them among the reading matter.

The speakers are by no means ‘satellite’ units. They stand 385 mm tall and their other dimensions are proportionate. They also weigh a solid 10 kilograms each, attesting to the quality of their construction. They are available in either cherry or black ash wood veneers.

The bass/midrange driver is a 152 mm unit, and the enclosure is bass-reflex loaded, with the port at the rear. That’s another reason not to put them in bookshelfs – these ports need room to breathe. The ‘normal’ tweeter is a 25 mm titanium dome unit with a dispersion post on the front that also nicely protects it from physical damage. The other tweeter is actually a ‘super tweeter’, a 19 mm Mylar dome unit fitted into a horn. This is designed to produce frequencies above 20,000 hertz.

Around the back, the cabinets have proper gold-plated binding post connections for the wiring, with two sets for each so that you can bi-wire them if you wish. (Bi-wiring is where the speakers and stereo amplifier are cabled so that one amplifier channel drives the woofer in each speaker, and the other drives the tweeter/midrange in each speaker. The rationale is that this reduces interference between the high and low frequencies and improves sound quality.)

JBL says that these loudspeakers have a sensitivity of 90dB, which is a touch above the average, and can handle up to 75 watts of power continuously. It also says that the frequency response of these speakers extends from 48 to 40,000 hertz (the upper figure courtesy of the super tweeter).

I was a little surprised once I installed this pair of speakers that they seemed to need to be turned up more than my regular loudspeakers to achieve the same volume level. The surprise was because they are claimed to be more sensitive than the speakers I was replacing. I checked, and I only measured a sensitivity of around 85dB.

Fortunately, the speakers seemed comfortable with plenty of power so I was still able to produce good volume levels.
The bass was also somewhat better than JBL claimed. In my room, with the speakers installed on stands, they managed to deliver a solid 30 hertz. That meant that they encompassed all the strings on a bass guitar, and even the full thud of a kick drum.

The overall sound was a touch bright and forward. These are not ‘mellow’ loudspeakers, but they are accurate and musical. And with movies played back in two channel mode, dialogue was realistic and clear.

If you want a pair of smaller speakers primarily for listening to music, and that can also work for DVDs, check out the JBL Studio L830 loudspeakers. But be sure that you have plenty of power on tap to allow them to realise their potential.