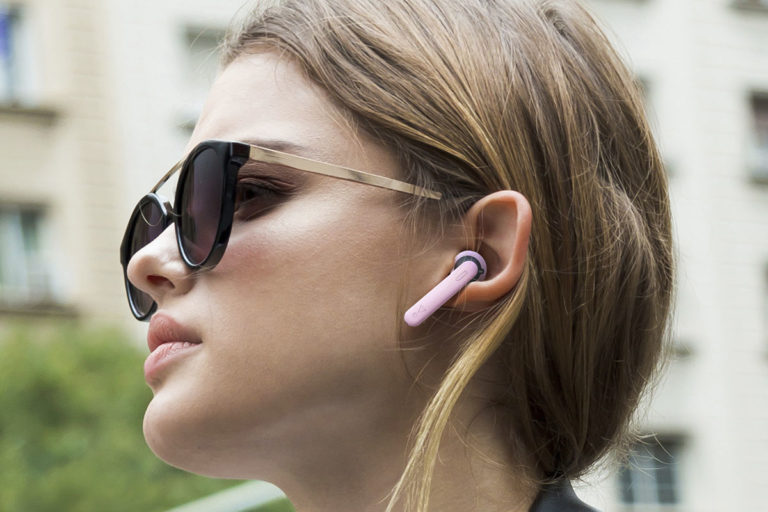 Once upon a time some very clever people invented this material called silicone, that synthetic rubber-like material we commonly see at the tips of earphones. For some reason Apple has only recently come around to silicone, providing silicone tips on its AirPod Pro earphones. JBL normally uses silicone, but the JBL TUNE 220TWS earphones apparently take their design cues from the silicone-less standard AirPods. Let’s see how well they work, heh?

The resemblance is strong. The earbuds of the JBL TUNE 220TWS true wireless earphones are hard plastic, each with a 40mm long bar poking out to the front. The bud is sculpted so that a protrusion guides the sound into the listener’s ear canals. At the end of those 40mm bars are the microphones for hands-free phone operation and Google Assistant or Siri use. Each bud weighs 4.9 grams according to my scales. That’s extremely light. The omission of silicone tips assists that way. The empty charge case weighs 46.5 grams and is one of the more compact of the genre, making it easily pocketable.

Each earbud has a single control button. The right-side one is for play/pause, while a double tap invokes your voice assistant. A long press on either side switches them on and off.

The case charges via a Micro-B USB connection. The buds are rated at three hours of battery life, with an additional 16 hours of charging capacity in the case.

The buds and case are available in white – which makes them look even more like you-know-what – black, a dusty blue and a rose-gold pink.

The Bluetooth version is 5.0. No special codecs are supported. The buds use unusually large 12mm drivers and have a rated frequency response of 20 to 20,000 hertz.

The fact is, I have never once been able to achieve a satisfactory seal of hard plastic earbuds in my ears, regardless of brand or shape. The JBL TUNE 220TWS true wireless earphones are no exception. I spent a while pushing, twisting, rotating and other manipulating the earphones, but I simply could not get a good airtight seal. Most of the time, they felt like they were simply hanging loosely from my ears canals rather than being firmly lodged. However, they actually did stay in place – loosely – even when I violently shook my head.

The upside of no real seal is that you are more aware of the world around you. Nice.

The downsides of no real seal are much weaker bass, and there is no real seal, so that environmental noises make their way into your ears.

And that last one means that you’re tempted to turn the volume up higher to compete with environmental noise. It was a temptation to which I usually succumbed.

As it happens, the JBL TUNE 220TWS true wireless earphones sounded pretty good overall. The one significant weakness was in the bass. But not in the bass production. If I held the earbuds firmly into my ears when music was playing, the bass response – level and extension – was actually pretty good. But I couldn’t really walk around with index fingers pressed against my earbuds, jamming them firmly into my ears. So the absence of a good seal meant the bass seemed to roll off quite significantly below around 60 hertz. Some of the upper bass guitar grind was good.

I also spent way too long with the earphones turned up too high in an attempt to drown out outside noise and bring the bass level up to a really satisfying level. Eventually I learned to surrender to the limited bass and the music being occasionally somewhat washed out by noise around me. Instead, I just chose a comfortable listening level. Then these earphones turned out to produce a quite sweet, enjoyable sound. Up too loud, the upper midrange had a rimshot quality which was rather wearing on the ears.

Are you missing anything?

As I so often do with these reviews, I just allowed TIDAL to play a bunch of tracks that it thought I might like while I was writing the bulk of this review. As I’m writing right now, the track “Bad Idea” by Ariana Grande is playing. Things are a bit sharp, with a significant upper midrange emphasis. But treble seems extended and the dynamics are very enjoyable. The problem remains the bass. Pop music these days goes for very strong bass – I have no problems at all with that! – and this is clearly hinted at in this track. But it is only a hint. I shall play this previously unfamiliar track on my reference desktop system.

Oh. Ah. Goodness me. There’s a real kick drum thump on that, and some super deep, tummy-rumbling synth bass that adds several extra layers of enjoyment to the track. What a real pity that stuff is only hinted at by the JBL TUNE 220TWS true wireless earphones.

The connection reliability was excellent. No dropouts at all, and with my standard walkaway test, I got a solid range of fifteen metres.

For years I have seen plenty of people wandering around with AirPods in their ears. From which I must conclude that many people find the hard buds perfectly acceptable for them. Perhaps my earholes are the wrong shape or size.

So take this into account with my ratings. But, look, over the years we’ve reviewed lots of wonderful headgear and eargear from JBL. The company knows its stuff. I can only assume that it saw the weird obsession many people have to that other fruity brand, which induces them to wear AirPods, and thought there was a demand for hard, uncomfortable earbuds with an inevitably weakened bass performance. And perhaps JBL is right. They know more about the market than I do.

Meanwhile, the JBL TUNE 220TWS true wireless earphones go back into the little box and I look forward to some JBL on-ear headphones I’m about to review. With, I’m confident, a great deal more enjoyment.

Features
8
Value for money
8.5
Performance
6
Ease of use
9
Design
6
Positives
I guess you can look like you’re wearing you-know-whats
Good range and connection stability
Negatives
Uncomfortable to wear
Weak bass due to poor seal
Little isolation from the noise of the world
7.5