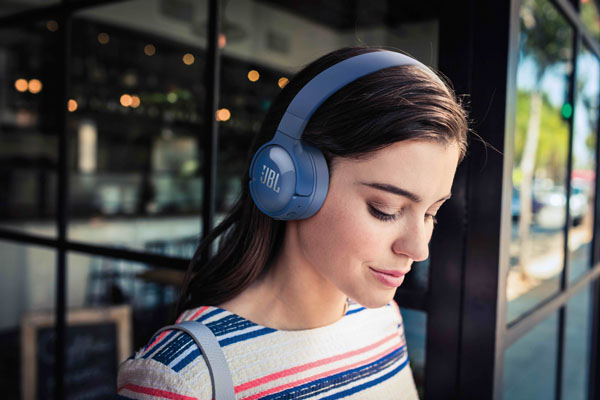 Interesting. JBL is a big, big brand name with a huge reputation. Yet, here it is selling the JBL Tune600BTNC headphones with active noise reduction for just $150. Do they work? Do they sound good? Let’s find out.

The name of the JBL Tune600BTNC tells you the main features of these headphones. “BT” stands for “Bluetooth”. “NC” stands for “Noise Cancelling”.

These are on-ear headphones. That is, the cups are 73mm in diameter while the cutouts in the middle are 30mm. They are way too small to accommodate anyone’s ears. Instead, they press against the wearer’s ears. That generally makes for reduced noise isolation. Your ears are usually bumpier than your head around the outside of your ears, so it’s harder to get a seal. It also means that they could get tiresome, depending on how tight the spring is on the headband.

I used these headphones for many hours and not once did I find myself becoming weary of them. Yet, the grip was sufficiently tight to allay any worries about them falling off.

Noise reducing headphones are excellent for travellers. The JBL Tune600BTNC headphones miss one feature that normally comes with travel phones: there is no pouch or case included. Still, you should be able to slip them into most briefcases, handbags or computer bags. The cups rotate ninety degrees. In that position they headphones are only 35mm thick. You can squeeze them down to 30mm.

All the controls and connections are on the right cup. They consist of a power button, another button for switching on and off the noise cancellation, and buttons for volume up and down and play/pause. The latter also works to manage phone calls, since the JBL Tune600BTNC headphones also provide hands-free operation of a connected phone.

Charging is via a Micro-B USB port. JBL says that it takes two hours to charge them from completely empty. That was in accord with my experience. Also included is a 2.5mm stereo port. A 2.5mm to 3.5mm cable lets you use the headphones even if the battery runs down. On an airplane, you can use the cable and active noise cancellation, but you’ll have to bring your own two-prong adaptor (they’re available at most airports for five or six dollars).

The JBL Tune600BTNC headphones pack 32mm drivers. There’s no mention of AAC or aptX codec support, so it seems that they use the standard SBC codec for stereo music.

The first thing to say about the noise reduction on the JBL Tune600BTNC headphones is that it works. It cuts back noise considerably. I used it on a Dash 8 turboprop airplane, sitting way down back in row 19 of the plane. And, yes, it worked. The noise level there was in the high 90s of decibels, C-weighted, according to my sound pressure level meter.

I recently travelled on a similar plane on the same route but forgot to don any sound reducers. Only half an hour, I thought, it’ll be okay. It wasn’t. It took a couple of hours before I felt that my hearing had returned fully to normal.

With these headphones, I could knock quite an edge off the level of noise. It’d take pretty fancy equipment to measure how much, but I’d suggest a good ten or fifteen decibels. That does two things. First, if you’re watching in-flight entertainment, or bringing your own (I listen to podcasts), you can play the material at a much lower volume. That makes your ears happier. Second, even if you’re not listening to anything, knocking that edge off the ambient noise within the cabin will leave your ears happier.

On the return flight, I used these headphones, and there wasn’t any of that re-adjustment period for my hearing afterwards.

The noise reduction of these headphones is better than it has any right to be at this price. That said, it does have a weakness: it’s noisy. I know, it’s there to fight noise and it does that. But if you’re using the headphones in a quiet environment, you will start to notice significant white noise whenever you pause the music.

The left ear unit also tended to produce something of a clunking noise when I was moving around when the noise cancellation function was on.

It’s great to have noise cancelling available. But I routinely switched it off for everyday use. That also has the useful side effect of extending battery life by about ten hours. The headphones switch on with noise cancellation on by default.

Another reason for having noise cancellation off, except when you need it, is that the headphones sounded better without noise cancellation. Perhaps it was that low level of noise, but I also felt that the dynamic edge was lightly sand-papered off when it was on. The sound quality was still acceptable, though, and voices were clear. But music was more fun (so long as there wasn’t too much noise around) with it off.

The tonal balance of the sound was excellent. High frequencies were present, but at the right level. That means they sounded like good quality loudspeakers. It isn’t surprising that JBL’s engineers would engineer that balance correctly. The bass was perhaps a touch stronger than perfectly natural, but it wasn’t overblown. It mainly had the pleasant effect of making it easier to follow the bass line in music. It was fairly well extended, too, giving a good sense of any really deep tones within the music.

There was decent handling of dynamics, keeping things clean and precise. For example, Queen’s “Another One Bites the Dust” is playing right now as I’m typing, and it’s controlled, with good space around the instruments. Everything’s clear. The synthesiser flourishes aren’t overdone, while the signature drum beat is solid.

The next step up in sound quality came with shifting from the Bluetooth connection to cable. You can have the headphones switched off in this mode. That way they act as passive headphones and will work even with a flat battery. Switch on the power and their internal amplifier kicks in, along with noise reduction.

Either way seemed to provide cleaner sound than with the Bluetooth connection, but the character was a little different. With the headphones on, the bass frequencies of kick drum and bass guitar retained that slight emphasis. With them switched off, that emphasis went away for a slightly more accurate balance. Interestingly, on tracks like “I’ll Find My Way Home” from Jon & Vangelis’ Friends of Mr Cairo, running the headphones passively allowed the extremely deep bass to be revealed, no longer masked by the 40 to 60-hertz region.

One final note, the Bluetooth connection screen of my Google Pixel 2 XL phone confirmed that the headphones include no advanced codecs. This screen indicates if an AAC, aptX or aptX HD connection is in operation.

There are no voice prompts in the headphones to tell you the state of the battery. Pay attention to the indicator on your phone, or just recharge regularly to avoid an unexpected loss of listening pleasure.

The JBL Tune600BTNC headphones bring respectable sound quality and decent noise reduction within reach of many who simply can’t afford the $500-ish price tag of some of the big names in the field … including some of JBL’s own.