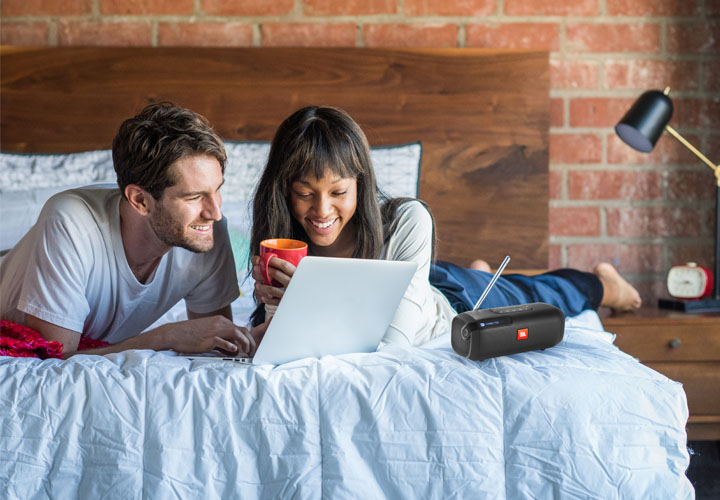 Sometimes people say, “They don’t make things like they used to!” I’m wont to respond, “Thank goodness!”. Take the JBL Tuner, for example. In some ways it’s like the old hand-held trannie of my youth. But in terms of sound? Hah, not even in the same ballpark.

I’ll return to that. But first, what is the JBL Tuner? Simply, it’s a compact Bluetooth speaker with DAB+ and FM tuners built in. Unlike that old transistor radio, there’s no AM.

The JBL Tuner is quite small. It’s 165mm wide, but only 66mm by 66mm in cross section. That’s not counting the telescopic antenna, which folds out and extends up to 400mm tall. The unit is portable not just in size, but in weight, coming in at 445 grams.

Actually, not just in size and weight, but also in independence from a power point. It has a 2,000mAh, 3.7 volt Lithium-ion polymer battery built in that gives up to eight hours operation. Included is a distinctive orange-coloured 5-volt 1-amp power adaptor and cable to charge up the unit. Most compact Bluetooth speakers don’t include the adapter. It’s a thoughtful inclusion on this one since I could imagine it also operating as a compact home radio, permanently plugged in.

The Quick Start manual also says that “other USB adapters can cause poor radio performance”. I guess many of them do tend to pump out a relatively noisy DC voltage.

That cable connects to the back of the unit by means of Micro-B USB. Next to that is a 3.5mm socket for analogue audio input. There is no cover over these. The JBL Tuner makes no pretensions to be waterproof.

At the left hand end of the intersection between top and front is a bevelled edge containing the display. This shows the source – Bluetooth, DAB+, FM, AUX – station information and volume level when you’re adjusting that. It also pipes up with useful information when you’re doing things like scanning the frequency bands for stations and so on.

On the top is a kind of elongated ring of control buttons. They are volume up and down, DAB+/FM, Auto Scan, Tune Up, Tune Down, Bluetooth and five numbered pre-set buttons. The power button is to the left side of the display.

Setting up just requires plugging in the power, switching it on, choosing a radio band and pressing Auto Scan. If you’re in DAB+ mode, the entire DAB+ spectrum will be scanned. You can skip between the found stations using the Tune Up and Tune Down keys. Hold down a pre-set for a few seconds to memorise up to five stations for ready access. If you’re in FM mode the scan stops when it hits a station. You can pre-set each one as you get to it, or not as you choose.

So why did I mention my old transistor radio? Why, it also had a nominally two-inch loudspeaker. But such devices were the very definition of “tinny”. Oh, so tinny. Yet we sometimes actually listened to music on them. Music from the AM band from one of the two commercial radio stations. We were deprived.

The sound from the JBL Tuner defies the fact that it has a mere 44.5mm speaker – “Transducer” JBL calls it – inside. Perhaps it’s the 5 watts of power that makes the difference. No doubt that helps, but modern compact design really does perform wonders.

No one is going to use the JBL Tuner as a party speaker, but for decent sounding background music it was fine. Sitting on my desk about a metre away from me, it was even better. Overall the tone was quite well balanced. Voices were clear, and there was no really marked distortion. Bass was hinted at rather than fully realised, but hinted at sufficiently well that the music didn’t seem lacking. Indeed, stations like ABC Jazz were surprisingly boppy.

I also played a fair bit of music using the unit via Bluetooth, and again it performed in a manner belying its size.

Just because two things have the same sized speaker doesn’t mean they sound the same. That transistor radio of yore was at best the primitive ancestor of the JBL Tuner.

Hobart can welcome the JBL Tuner, now that it is finally receiving DAB+ radio. Here in Canberra, we remain on a “trial”. My office is covered in metal insulation and has a metal roof. There are a couple of rather large hills between my office and the DAB+ transmitter, which is perhaps fifteen kilometres away. But even within my office reception was adequate, in the sense of not dropping out or breaking up. I was impressed.

The battery is rated at 8 hours but, of course, it all depends on how hard you have the unit working. Run it at high volume and you’re going to get less than that. As for idle time, I charged up the unit and used it for a little while, and then left it aside for a couple of months while working on other stuff. It was not plugged in. When I came back to the unit and plugged it in to recharge, its meter indicated it still retained 90% charge. Again, impressive.

I do have a complaint about the “Quick Start” manual, and the Bluetooth more generally. The manual says how to pair the unit to a source device … the first time. But it doesn’t mention how to pair to a different source device. The information is available in the FAQs on the Australian website for the JBL Tuner. But why not in the manual? I suppose the website will be there forever, but as someone who still has in his possession a manual for the Sony CDP-101 (look it up!), I prefer the longevity of paper documentation. I copied the instructions from the FAQ into the paper manual.

The complaint about Bluetooth is that the JBL Tuner can pair to only one device at a time. To pair to something else you have to perform a factory reset. Of course, that also wipes all your presets. Why can’t you just hold down the Bluetooth key for five seconds to clear that pairing and look for something else?

My hopes were briefly raised at one point. You see, I had had a thought: wouldn’t network functionality be nice? So, I plugged into the Auxiliary input on the back a Chromecast Audio device. It turns out that plugging something in overrides whatever is playing. After using it for a while I unplugged it and it returned to the Bluetooth function, but it flashed “Pairing” on the screen. I quickly grabbed a couple of different phones to see if they could pair, but they didn’t. Instead, the JBL Tuner had just sent a pairing request to the Samsung tablet I’d be using to feed it music.

I guess there was only one real omission. I would have liked the unit to have an output – wired or Bluetooth, I wouldn’t care – so that I could connect it to better speakers when at home. But that’s asking the unit to perform another function for which it wasn’t designed. What it was designed for – portable DAB+ radio functionality, with the useful addition of Bluetooth speaker and FM radio – the JBL Tuner does admirably.

Features
Value for money
Performance
Ease of use
Design
Solid performance
Excellent DAB+ reception
Compact and very, very useful
Comes with its own power supply
Be good if you could pair to different Bluetooth source device without resetting
4.4