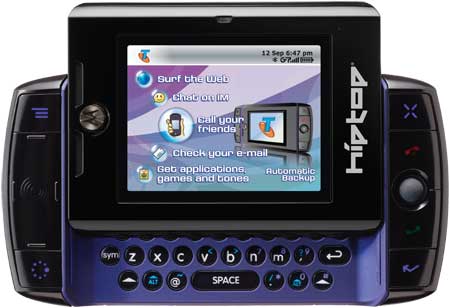 It’s been the star of Entourage, Grey’s Anatomy, The OC, Veronica Mars and Gossip Girl. You’ve even seen it up on the big screen in The Devil Wears Prada. And of course, it’s regularly spotted in the company of Hollywood’s ‘hip young things’ enjoying on a night out on the town – from Paris Hilton to Rachel Bilson and Mischa Barton, plus all the coolest actors and actresses, singers and rappers in between.

‘It’ is a unique device known locally as the hiptop (in the US it’s called a ‘Sidekick’) and – and along with the iPod – it’s become a must-have tech accessory for teens and twentysomethings.

With its unique flip-up screen, compact keyboard and a live connection to the internet via the mobile phone network, the hiptop literally puts the best parts of the internet in your hand.

Take the net to go

While the hiptop can be used to make and take calls like any other mobile, its real appeal is that it has full access to the mobile internet and includes a set of pre-loaded programs for handling your email, browsing the web and doing instant messaging chats with online friends. In fact, unlike most mobiles, the hiptop has been specifically designed with the Internet in mind. It has a proper ‘QWERTY’ keyboard that’s just like a pint-sized version of the one on your PC, plus a larger 7 cm widescreen display that swivels up to sit horizontally above the keyboard.

Email on the move

Devices like the BlackBerry have popularised the idea of being able to check your email on the road, but they’re mainly intended for large businesses with specialised email systems. The hiptop is ‘mobile email for the rest of us’. It works with many regular mobile Internet email accounts, such as Telstra’s BigPond, as well as online mail services such as Gmail, Hotmail and Yahoo.

Of course, the quick back-and-forth of online chat is faster (and more fun) than email, so the hiptop can also tap into the instant messaging networks of Windows Live and Yahoo. You log on using the same account as you’d use at home or work, and you’ll see the same online list of friends.