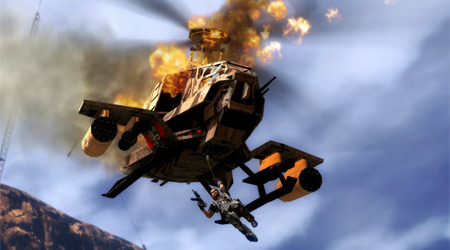 Owing so much to the game Mercenariesfrom the ill-fated Pandemic studios, the Just Causeseries is back with a much, much better follow-up, in the guise of Just Cause 2. Sadly ditching the iconic art treatment of the original, this sequel is nevertheless better in every other way, with tighter combat controls, decent weaponry and some great vehicles.

The unique selling point in Just Cause 2is the grappling hook wielded by your character, which achieves greatness through its sheer versatility: not merely a way of pulling enemies off high perches, it’s also a useful melee weapon if you find yourself at close quarters with a bad guy and an empty clip and, most entertaining of all, an excellent method of locomotion, providing a way of swinging and ‘parachute climbing’ across hilly terrain that rivals Spider-Man.

Gameplay is pretty routine – go some place, shoot enemies to clear the area, salvage, rescue or escort something – but some superb attention to detail elevates the game above your run-of-the-mill sandbox “go-anywhere” game. Jet fighters, for instance, have infinite ammo rather than a realistic payload, so outlive their otherwise limited utility and become huge fun.

A neat (perhaps too subtle) radar system helps guide you to game-enhancing “pickups”. A “Dual tethering” capability in the grapple hook can provide all sorts of innovative and hilarious options in dispatching bad guys; our favourite is the Pinata kill.

The play area in Just Cause 2is vast – playing for a period that would see you easily finishing other games will only get you 10 percent completion here – and, critically, that vast area is interesting. Unlike other “open-world” games, such as the recent Operation Flashpoint: Dragon Rising, exploration is neatly rewarded in Just Cause 2, throwing up oddities like the “Black Boxes and Skulls” for you to discover, or even whole islands like the one modelled on the TV series Lost, making investing time in the game a delight.

And a game whose entire ‘raison ‘d’être’ is to cause as much chaos, via wanton destruction, as possible, is always going to find a willing public. Kudos to the developer, Avalanche Studios, for making the journey so much damn fun.

Max Everingham is the owner of Game State, a B2B videogame software analysis and marketing consultancy. Max is a videogames veteran, having worked in the industry for over 13 years, including brand and product marketing positions at EA and Codemasters.