Just take my money: hands on with Sony’s VAIO Pro 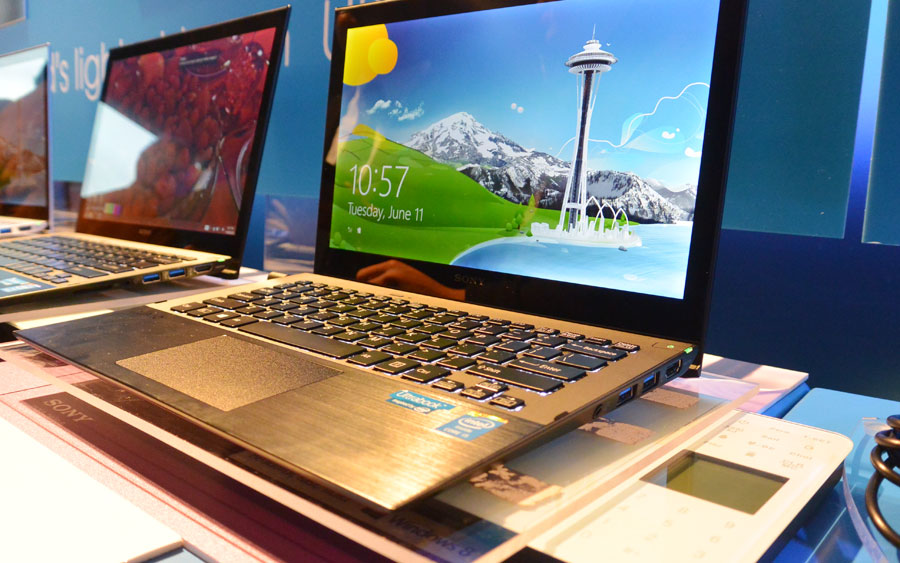 Last night at the launch of Intel’s fourth-generation Core processors, we certainly saw some interesting pieces of tech. There were big tablets, little tablets, and claims of battery life that were able to reach over nine hours. And then there was a line of computers turning everyone’s head, because it looks like someone has finally made a good and proper MacBook Air killer.

Apple’s Air has long been the Ultrabook to tango with. Not technically classed as Intel’s “Ultrabook” specification, the computer is a thin and light masterful piece of kit, and has been a favourite of many a reviewer and consumer. And why not: it’s light, elegant, and features a solid amount of battery life.

PC manufacturers have for a while been trying to compete with the Air, though, and there have been some notable machines in that time. The Lenovo ThinkPad X1. Samsung’s 13 inch Series 9. Even Acer’s Aspire S7 got close, but didn’t quite nail the battery life.

Now, there’s a new machine in town, and like the recently announced 4th-generation Core equipped MacBook Air, it too is already in stores, arriving before most of the competition. Like the Air, it’s sleek, well designed, and sports the tech to make it a true competitor, but it also comes with some features that go above and beyond the call of Apple, and that alone is impressive.

This is Sony’s VAIO Pro, and while the phrase “you have to see it to believe it” can usually apply to pretty much anything, the phrase has never been more true of a product.

It’s a small laptop, sure, but it’s a laptop with a touchscreen, as one of the core features of Intel’s fourth-gen chips is support for touch, and Sony is saying that touchscreens will come with every fourth-gen Core device from here on in.

We’ve seen laptops with touchscreen before, but we haven’t seen laptops with triluminos displays. For those that aren’t aware, this is the same colour gamut widening technology that Sony is throwing into its very high end TVs, including the 4K Ultra High Definition displays that sit in the 55, 65, and 84 inch sizes.

Employed with either an 11 or 13 inch In-Plane Switching (IPS) touchscreen delivering Full HD (1920×1080) resolution, this promises more solid colours that appear to be more real, wider dynamic range, and in general, a better picture altogether.

Eyes on yesterday, and that’s exactly what we saw, the comparison made between the VAIO Pro’s direct competitor, the aforementioned MacBook Air. While we look forward to doing our own testing, the screen looked impressive enough by itself.

But the screen is just one feature in a laptop that looks to have been designed and priced well from the get go.

We could list specs for you – Intel Core i5 fourth-generation “Haswell” processors, 128GB solid-state drives in either SATA or PCI-express (faster than SATA) setups, 4GB RAM – but that probably doesn’t interest you.

What will, though, is the design, and with a carbon fibre chassis that is insanely light, neither of these laptops goes anywhere near the current crop of thin and light computers.

In fact, the 13 inch barely nudges over a kilogram at 1.06 kilos, while the 11 inch model — which packs practically the same tech into a smaller form-factor — weighs 870 grams, just over 200 grams more than an iPad.

Pretty snazzy, and those weights (or lack thereof) are insanely noticeable when you pick either up, making us believe they won’t hurt the back much at all.

Battery life is expected to hit roughly seven hours for the 11 inch model and nine for the 13, but these can be doubled with a battery pack that plugs in from the bottom and should retail for under $300.

There’s another area we’re intrigued to see Sony working on with its Pro laptop, and that’s the battery pack.

A pet peeve of ours, we’re constantly dismayed when manufacturers decide not to change the basic brick formula that’s out there, with only Apple, Asus, and Samsung moving away from the stock standard brick.

Sony can now join that group with its new laptops, providing a power brick that not only features a USB port to charge your devices, but also a wireless access point that plugs in over the brick’s USB port and offers a way to distribute network access while the laptop charges.

Indeed, this looks to be one impressive piece of kit, and for once, we’re seeing a manufacturer put the pricing squarely against Apple, and not just slightly above it, which is good to see, also.

We’re looking immensely forward to reviewing this one, as it looks like Sony might have nailed the Ultrabook PC formula.