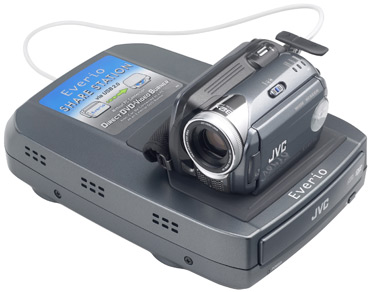 Despite its innovation, one of the criticisms of JVC’s Everio range was what to do with a full hard disk if you were out in the boonies. The new Share Station (CU-VD10) sets out to solve the problem, writes David Hague.

If this has ever happened to you, You’ll know how frustrating it is: You are out in the field with your camcorder, getting some killer sporting, scenery, wildlife or family shots and all of a sudden the dreaded happens – you run out of tape, DVD space or, in the case of the JVC Everio series, hard drive space.

And the day has only just begun (if you run out of battery power, then no sympathy!).

With tape, it’s not too much of a drama, as these days many convenience stores, pharmacies, supermarkets and even service stations carry MiniDV tapes as a matter of course. With the uptake of DVD-based camcorders, no doubt this will also happen DVD media in the very near future as well. But as hard drive-based camcorders become more popular – and have no doubt, Canon, Sony, Panasonic and other vendors are hardly likely to let JVC have this market all to themselves – it is a bit too much to expect that users should be forced to carry a laptop around with them to dump off data when the drive fills up.

Of course, logic says that one should copy all data from the camcorder to a hard disk before embarking on another shoot, thus allowing the maximum recording time, but just as many like to keep favourite shots on their digital still cameras, so people also like to keep their favourite footage to show friends and relatives. Call it the convenience of portability.

Likewise, it is sometimes just not possible to copy data off. Many a time I have had to resort to using my ’emergency rations’ of MiniDV tape kept especially in the glovebox of the car when at a sporting event – especially motor racing when anything can and does happen.

A dedicated video journalist will more often than not carry a laptopÂ in order to capture footage if space does run out – or at worst, a goodly amount of extra tapes/blank DVDs. In fact, however, most people don’t want to have to do this.

For Everio owners, this is where the new JVC Share Station comes in. The Share Station is in effect, an external DVD burner that allows burning direct from an Everio, or which can act as an external burner to a PC (or laptop).

The inbuilt software of the Everio allows you to selectively burn footage to a DVD in the Share Station (only ‘R’ format discs are supported). Be aware, however, that JVC says there is no guarantee that all players will be able to play back discs created in the Share Station, so it would be wise to check if your player is compatible before deleting data.

There are several options for disc creation. For example, you can burn footage from a specific date, from a specific event (clip), create a playlist and record from that, create a second and subsequent disc identical to the one previously created or, finally, simply select all data and burn that. Bearing in mind, however, that the hard drives used in Everios have a capacity up to six times that of a DVD.

There are no menu-making facilities however other than having a list of files created accessed by using the ‘Top Menu’ button of the player. Any discs created this way will start playing automatically.

Although I didn’t get the opportunity to actually try this, there is absolutely no reason that, coupled with the backpack PowerPak from American Power Conversions, you couldn’t use the Share Station ‘in-the-field’. Likewise you could use a car’s (or boat’s) 12 volt power source or externally to a laptop in the same way if your laptop doesn’t have an internal burner.

As mentioned, the JVC Share Station can also double as a standalone external DVD burner. Again, it is necessary that you have a USB port (version 2.0 not 1.0) installed for the burner to work in this mode.

Power2Go is supplied as the burning software and while not in the league of dedicated DVD authoring software such as Ulead Movie Factory, Adobe Encore or Vegas +DVD, as a starter package it is adequate. But only just. Bear in mind that this package will only let you create a DVD folder(s). To have the ability to create a menu-based DVD video, you must upgrade to its bigger brother Power2Go ‘Next-Gen’ which costs US$39.95. I’d be saving the pennies and aiming for something like Ulead Movie Factory rather than follow this route.

While there is no escaping that having a laptop or desktop with a fully functioning DVD burner and associated software is the best way to run in the longer term, the JVC Share Station provides a convenient stop-gap solution to a number of problems presented by the latest generation of camcorders, primarily that of feeing up hard drive space. At $329 it’s not inexpensive, but if you have a need, it could pay for itself when extra storage just has to be had.