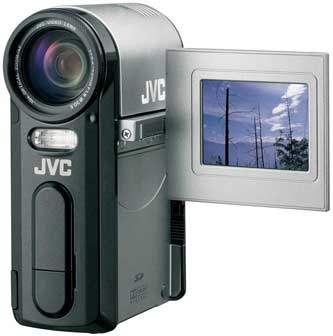 The Everio range from JVC contains a few different models, some with internal hard disks and others with microdrives. The first of the models with a MicroDrive is the GZ-MC100 ? a model JVC calls a ?casual? style camcorder (to differentiate it from the GZ-200 which is labelled as a ?pro style?.

The MC100 can store up to 60 minutes of MPEG2 video on the 4Gb MicroDrive. To transfer the data from a MicroDrive to a computer, a special adaptor is used (for interest, a MicroDrive is also used in an iPod for its storage). As the MC100 is also PictBridge compatible, it can be attached to a suitable printer for still images to be printed directly.

Overall
Features
Value for money
Performance
Ease of Use
Reader Rating0 Votes
Super imaging in ultra-fine and fine modes, excellent stills, ease of use.
Annoying lag between files on playback, no widescreen support or letterboxing.
4